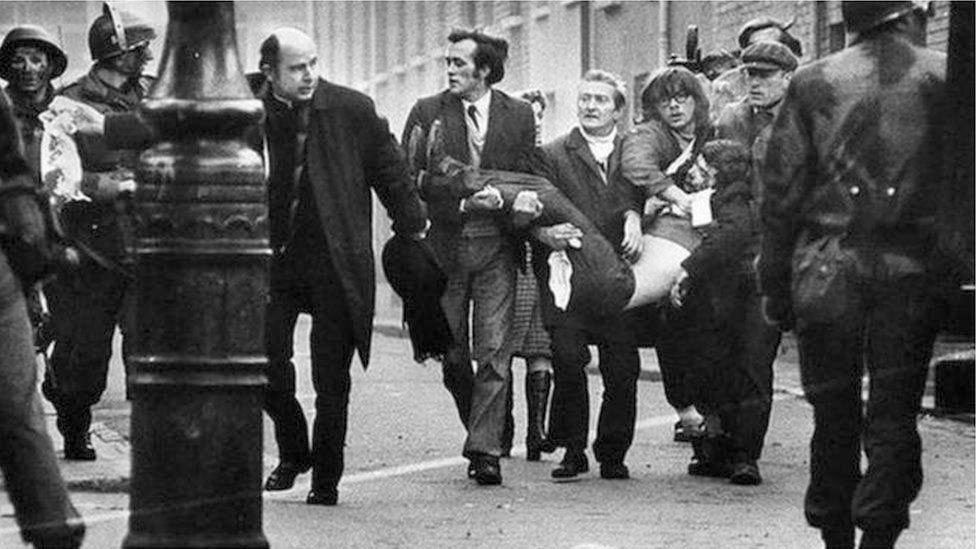 ON January 30, 1972, I was living in Canada. When news started to filter through about people being shot dead in Derry (we were seven hours behind Irish time), even at a distance of several thousand miles it felt like a turning point.

We were back to the days when the British military killed Irish people at will. But surely now, after this mass killing, Britain would have to strip off its disguise as a peace-keeper between two warring tribes.

I hadn’t reckoned with the gullibility of the Canadian media. Taking their information from official British sources, they encouraged readers and viewers to see this as British troops responding to IRA violence.  The British Prime Minister Ted Heath, we were told,  had publicly blamed the IRA for the violence; and Colonel Derek Wilford, in charge of the 1st Parachute Regiment, gave interviews  which repeatedly made clear that all those killed had been engaged in violence, some of them found with weapons on their person.

A message to all our followers: please don't feed the trolls. There will always be people who want to insult the memory of the dead of #BloodySunday. Please don't respond to them - that's what they want. Report them to Twitter, block and ignore them. That's the best way. Thanks

It’s amazing the speed at which a lie travels. In Winnipeg, where I was living, the local paper had a columnist called Shaun Herron. He was originally from the north of Ireland and wrote regularly about the violence back home from a unionist perspective.  When Bloody Sunday happened he was out of the traps like a greyhound.

There were those, he declared, who would try to smear state forces. We must not listen to such IRA  propaganda. He had personal contacts within the British Army and British intelligence, and all had confirmed to him that those killed had been armed and fired first. No ifs, buts, maybes – these were terrorists.

I wrote a letter in response to his column, asking where was the evidence for his claims.  Several Catholic clergy who attended the march, noted for their opposition to the IRA, had declared that  those killed were innocent. Herron’s claim, I suggested, was British propaganda.  He responded in his next column, dismissing me as “a particularly bitter type of shrew often found in Ireland.” Instead of evidence, he went for name-calling, and confused name-calling at that: I am not now nor have I ever been a bad-tempered or aggressively assertive woman.

But the brief exchange impressed on me the power and reach of Britain’s propaganda machine. Shaun Herron and other journalists  with links to the British government and military were the gate-keepers of information. The average Winnipeger, not much interested, accepted without demur the lies by the likes of Herron. The voice of anyone, shrew or non-shrew, was tiny beside such authority.

The execution of the leaders of the Easter Rising led to a nationwide insurrection; Bloody Sunday led only to an influx of northern volunteers into the ranks of the IRA.

Just as he’d done during the 1969 Battle of the Bogside, Taoiseach Jack Lynch talked a good game: “The government is satisfied that British soldiers recklessly fired on unarmed civilians in Derry yesterday and that any denial of this continues and increases the provocation offered by present British policies both with the minority in Northern Ireland and to us here.”

Translated: God, that was a shocking thing to have happened. But I must make sure Fianna Fáil and the south is kept safe from republicanism.

Lynch, as so often before, tried to ride two horses. He had to pretend to share the anger of the Irish people; but at the same time the IRA, not the British military, must be presented as the enemy. His 1969 broadcast claiming his government would not stand idly was not a one-off: Bloody Sunday produced much huffing and puffing from the Irish government but little else.

On January 30, 1972, the British forces in Ireland showed their brutality and contempt for Irish lives. On January 31, 1972, the Irish Government in Dublin showed its innate timidity and indifference to the loss of northern lives.