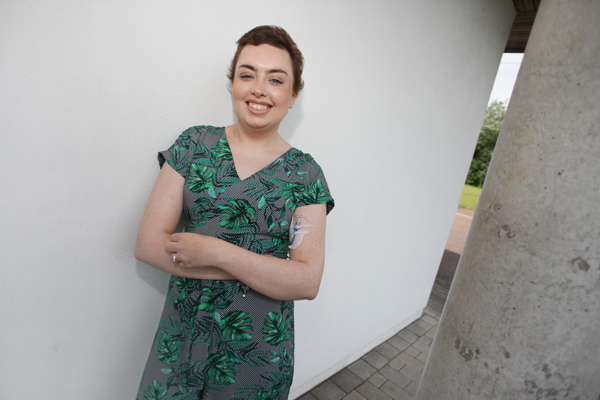 DELIGHT: Eimear Smyth will remain in Dublin for months after her immune system is restored

THE DELIGHTED father of West Belfast girl Eimear Smyth says he will be forever indebted to the “wonderful person” who is set to become a stem-cell donor for his daughter.

In June the Andersonstown News told the story of how 24-year-old Eimear was bravely battling Hodgkins lymphoma, a form of blood cancer, and that her only hope of survival was a stem-cell transplant.

Eimear had self-donated for a stem cell transplant – this meant there was no worry of the cells being rejected. In March Eimear received a phone call to say her transplant was a success and that she was cancer-free.

Eimear’s joy was short-lived, however. Speaking to us in June she said: “I had to get surgery on a lump on my neck, they took it out and tested it, then two weeks later at an appointment I was told the cancer was back, I wasn’t shocked, I just went into planning mode.”

Since then the search has been on to find a stem-cell donor for Eimear. The appeal went out to GAA clubs, soccer clubs, boxing clubs and secondary schools, with Eimear’s family encouraging people to register with the Anthony Nolan organisation who raise awareness and dispel the myths around stem cell donation.

Speaking to the Andersonstown News just hours after receiving a phone call that will give his daughter a second chance at life, an emotional Sean Smyth said: “We got the call from St James’ Hospital in Dublin at 5.15pm on Tuesday afternoon and told us they had a ten-ten match and we haven’t stopped smiling since.

“This is the news we have been waiting on, we have a long journey ahead of us but we are ready for it.

“Eimear will be admitted to St James’ on October 16th and the transplant will take place on the 24th. She will spend four to five weeks in St James’ then once she is discharged she will have to stay in Dublin for up to twelve weeks as there will be a high risk of infection, so she needs to be within ten minutes of the hospital.”

When asked what exactly the stem-cell transplant will do Sean said: “Eimear’s immune system does not recognise cancer as an enemy, when she gets her chemo it kills the cancer and she goes into remission and for a while she’s cancer free.”

Eimear has been in remission three times in the past two years, however because of her immune system’s inability to deal with the cancer it returns.

Sean added: “When chemo stops there is a very high risk that the cancer will return within six to eight weeks because her body doesn’t recognise it as being a danger, so what they intend to do now is destroy Eimear’s immune system and give her somebody else’s.

“The really strange thing about it is that Eimear will now have a completely different blood group. Because her donor’s blood group is different to hers, her body will now adapt after transplant to this new blood group, it’s really spooky!

“This is the amazing thing about stem cells, the donor doesn’t have to die in order to donate. Blood and stem-cell donation is so important.”

Asked what he would say to the person who has donated their stem-cells to Eimear, Sean said: “Thank you, you have given Eimear a chance at life, without this transplant Eimear won’t survive.

“Without this person our daughter wouldn’t survive, it makes me so emotional to even say those words. We will be forever in their debt.

“We also want to thank the Andersonstown News who were the first to tell Eimear’s story. This weekend we took part in the colour run for Anto Finnegan and he took a photo with us and tweeted out a stem-cell appeal, we couldn’t believe he would think of us in the midst of everything. Then two days later we get a phone call saying they’ve found a match.
“We are going to keep Eimear’s search going, blood donation, stem-cells and organ donation are so important and we want to marry these three things together, I will work with anybody to try and get the message out there.”