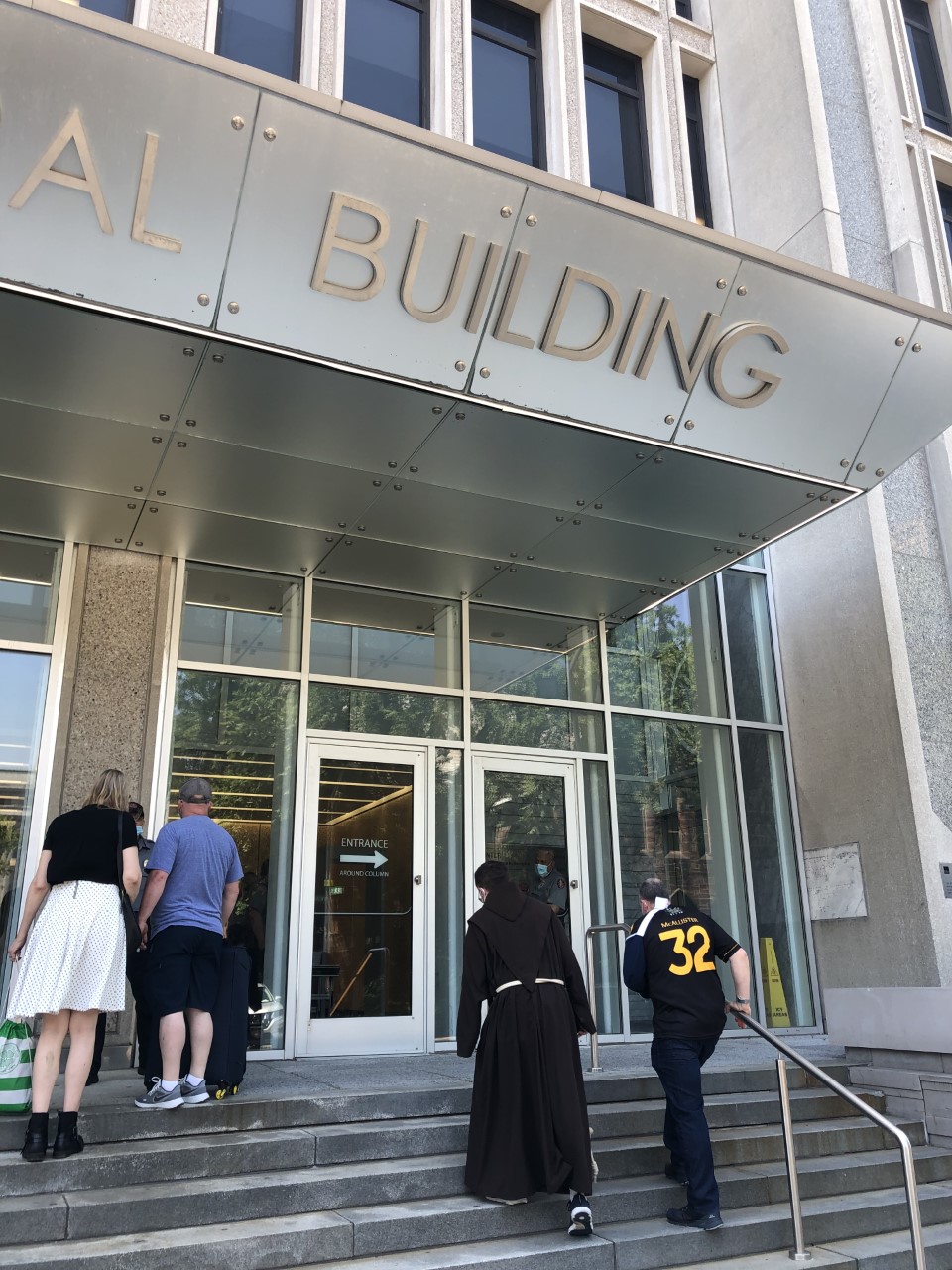 END OF THE LINE: Irish American cleric and campaigner Fr Brian Jordan accompanies Malachy McCourt as he surrenders to the authorities at the Federal Building in Newark for deportation.

With family members and supporters looking on Malachy McAllister surrendered himself to federal authorities in Newark, New Jersey on Tuesday morning, June 9, for what all believed would be the final chapter in an extraordinary 24-year American saga.

At time of writing, McAllister is on his way back to Belfast via Air Ambulance after having been held in custody overnight at the federal detention facility in Elizabeth, New Jersey.

McAllister recently suffered a broken collar bone when hit by a car when out for a bike ride near his New Jersey home.

McAllister also suffers from asthma and has expressed serious concerns for his health in the context of Covid-19.

With the deportation today of Malachy McAllister the torch of freedom that the Statue of Liberty holds burns less brightly and the words of Emma Lazerus seem to have been forgotten- https://t.co/oLSmiBoOpX pic.twitter.com/y4LxE3Rbzy

As McAllister reported to federal authorities, members of his family and a group of supporters, most of them with the Ancient Order of Hibernians, of which McAllister is a member, gathered around him outside the federal building. Pipers played and prayers were recited by his friend Fr. Brian Jordan.

Away from what could be the Belfast man's final day on U.S. soil, a last minute attempt was being made to persuade the Trump Administration to defer deportation, as it did back in November when McAllister was given a six month reprieve.

A letter to President Trump on McAllister's behalf was signed by House and Senate members from both parties and sent to the White House on Monday.

Last week, a letter from members of Congress was sent to the Acting Secretary of the Department of Homeland Security, Chad Wolf, and the AOH mounted an online campaign directed at the White House and supporting McAllister's bid to remain in the United States.

As of presstime there was no known response to the letters, and no evident action by the administration, but any developments will be reported online at www.irishecho.com.