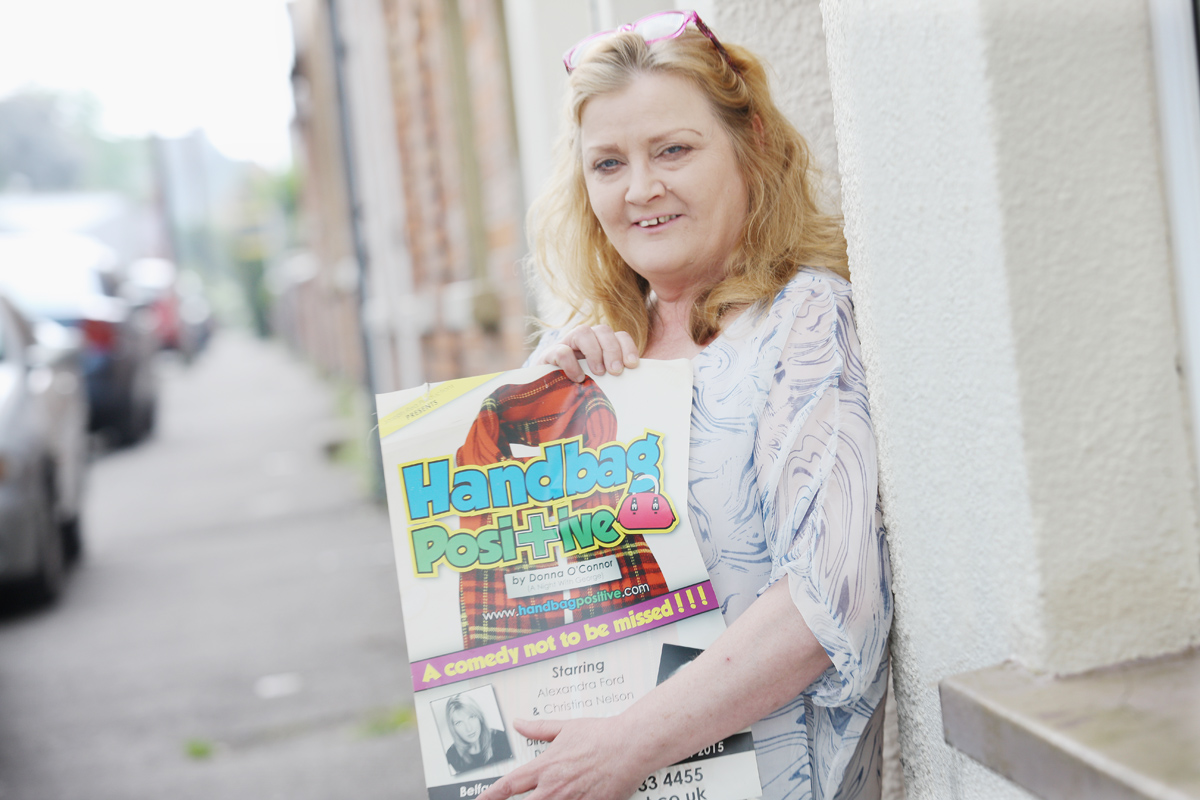 IT’S been dubbed the ‘girls night out’ during Euro 2016 – the story of two best friends who drift apart until fate reunites them in their middle age. And it’s back in Belfast to provide welcome relief from the footie.

Produced by 50 Shades of Red, White and Blue’s Joe Rea and written by Donna O’Connor, the co-writer of A Night with George, Handbag Positive explores the dark days of the 1970s with a bit of comic relief as two best friends turn to the Bay City Rollers and boyfriends to cope with the darkest days of the Troubles in 1970s North Belfast.

The new and hilariously funny play is features Attracta and Nora, two best friends as teenagers who shared everything from their Bay City Roller trousers to boyfriends, sang Shangalang and ran with the gang. Bomb scares at their school are the norm but ensure a welcome day off for the inseparable girls.

As people do, the teenagers drift apart until fate reunites them in their middle age in the odd but also familiar setting of their local A&E departmen waiting room. They meet, chat, and find themselves back in their teenage years, exchanging stories as well as insults and wondering why they ever liked each. And discussing how they ever got a ‘lumber’ whilte wearing Bay City Roller trousers.

I met Donna O’Connor at her North Belfast home and the 53 year-old, a young girl in the 70s, explained the inspiration behind the comedy.

“Handbag Positive is based mostly around my experiences of going to school at Our Lady and Mercy Girls’ in North Belfast,” she said.

“When I was at school, four of our pupils were killed during the Troubles. I don’t think there was another school that suffered as much loss of life than my own. It was a Catholic school in a predominantly Protestant area.

“North Belfast was in the middle of all the deaths and it became commonplace that people were killed.”

The theme of ill-health and sickness has been a recent concern for Donna, who was diagnosed with kidney cancer, and one which is present in the play, after Donna drew on her experiences as a carer for her mother, who suffered from dementia.

“I was diagnosed with kidney cancer so the last 18 months has been a bit of a blur with treatment and surgery,” she said. “Me and another North Belfast woman, Sharon Maguire, from Ligoniel were the original actors for the piece but I couldn’t commit when I took sick.

“I was co-writer of A Night with George and spent six years doing that, including a two-week stint in New York on Broadway.

“I was a carer for my mother for a long time and I drew a lot from my experiences as a carer. She had dementia and made up yarns and stuff that she believed to be true.

“I also broke my two fingers when I was performing live on stage at the Waterfront Hall and ended up in the Mater Hospital for six hours. I watched the madness of the A&E department and it was absolutely bonkers what went on, and part of that experience is heavily portrayed in the comedy,” she added.

Handbag Positive debuted at the Waterfront at the end of last year and due to its popularity is returning for a week-long run at the Grand Opera House in Belfast. For Donna, the hard work and dedication to the arts is ongoing. She told me of her new work, The Cancer Coach, based on the real life story of a friend in Donegal.

“I rent a house in Donegal and go up when I can. I was horrified to learn that a guy who works in a bar up there is forced to travel to Galway for treatment after he was diagnosed with cancer on his hand,” she explained.

“Moby gets a bus to Sligo and then a ‘cancer coach’ to Galway. It sounds depressing but it’s about all the experiences of the people on the bus and the ‘craic’ element.

“When people have cancer, they often don’t want to talk about it, but I want people to. For myself, I thought I was going to die but then I realised it was treatable and I could talk about it because it’s part of life at the end of the day. We need to talk about it and not be scared about it and I think this will help raise awareness of it.

“As for myself, I’m going to stay acting as long as I can but I know one day that I will have to pass the baton on to some other poor women,” she smiled.

Handbag Positive stars Alexandra Ford (Give My Head Peace) and Christina Nelson (Mistletoe and Crime) and is on from Monday 20 to Saturday 25 June at the Grand Opera House. Ticket prices range from £17.25 to £27.75. Call the box office on 90 241919.