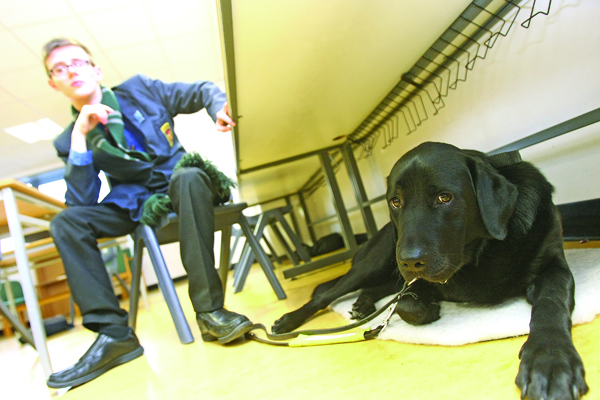 Upper Sixth student Alexander, who is registered blind, welcomed Dileas into his family and the college back in August and told the Andersonstown News how the two-year-old black Labrador Retriever “has been a great help to me in school and at home”.

“Dileas really does help me, around the corridors, the steps, to and from classrooms and in helping me find a chair if needs be. I trained with Guide Dogs NI on the Holywood Road and worked alongside their staff during the summer. For dogs like Dileas they would receive advance training from when they are one-year-old. He has been really welcomed into school and his name comes from the Celtic which means ‘strong, loyal and faithful.”

With his own bed and basket in the senior learning support area, Special Needs Co-ordinator at the College Orla Rodgers spoke of how Dileas is part and parcel of the school.

“At the start of the school term Alexander spoke at our Year 8, 9, 10 and 11 assembly explaining to our junior pupils how having Dileas in the school would become the new normal, to bear with him, while Dileas got used to the school.

“Everyone, pupils, teaching and support staff have really taken to Dileas, the children are very respectful of him. Having Dileas has really developed Alexander’s confidence; he’s a role model for our children and has raised awareness of being more inclusive and also the great work of Guide Dogs NI.

“When Alexander arrived in Year Eight I was his form teacher, he has been on an amazing journey and it’s fantastic to see this loyal friends support him with his education,” she said.

Alexander was keen to stress that Dileas should not be seen as a pet.
“I have to be quite strict with his routine and if people, strangers want to pet him, they would have to ask my permission as it’s important for Dileas to not be distracted.”

With a Multi-Media course earmarked at the Belfast Metropolitan College for next September, Alexander said Dileas will be experiencing college life at the Titanic Quarter campus.

“I say to people that Dileas is like my friend, but really he’s like my son,” he laughed. “I groom him everyday, I feed him twice a day, everyday unless I am sick and we really are inseparable. Guide dogs really do help a lot of people,” he said.