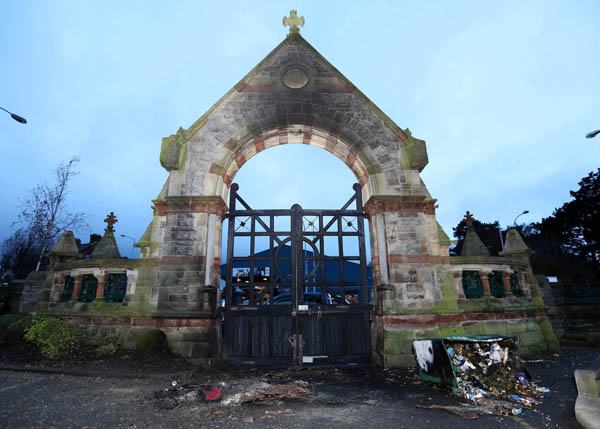 The morning after – the charred remains of the Milltown Cemetery gates

WEST Belfast MP Paul Maskey has slammed those responsible for the "disgusting behaviour" that saw the gates of Miltown Cemetery set alight on Friday night.

“While I was in the cemetery this morning I spoke to many relatives of people who have loved ones buried here. They expressed their anger and sadness that a small minority of young people could even consider doing something like this.”

Mr Maskey continued: “Parents have a responsibility to know where their children are and what they are doing.

“There are alternatives and the vast majority of our young people are fantastic and respect and play their part in so many positive activities in this community.

“The young people who carried this out most likely have relatives buried in this graveyard and it's appalling that they would even consider causing destruction in this way and dishonour the memory of their loved ones.”

He added: “Sinn Féin called a special meeting of the People and Communities Committee of Belfast City Council last Wednesday at which we proposed that extra resources be put into the Falls Park to counter anti-social behaviour.

“As a result of this, extra Safer Neighbourhood wardens are being put into the park and the Council will also be moving to employ mobile attendants who will have a specific responsibility for safety within parks in West Belfast.

“A community event will be held in the Falls Park next Friday evening with more details to be announced shortly. I am calling for the community to attend and participate, and for families to come along and show the resilience and the true community spirit of the people of West Belfast.

“Our parks and our cemeteries are at the heart of this community and we will do all in our power to protect and look after them.”

PSNI Area Commander for West Belfast, Chief Inspector Kellie McMillan, said: “This is a cemetery, a graveyard – a place for quiet reflection to peacefully pay respects to loved ones who are no longer with us.

“I cannot understand what any human person would feel could be gained from such thoughtless, criminal vandalism.

“This is not acceptable behaviour and a robust response from policing and the criminal justice sector is required.

“I am appealing to parents and guardians to know the whereabouts of their children and who they are with and to play a role in preventing them from becoming involved in behaviour which could see them end up with a criminal record.”

SDLP West Belfast Councillor Tom Attwood added: “Those responsible for this callous attack on a place of remembrance and reflection have no respect for this community or those who come here to pay respect to loved ones.

“This is a disgusting attack and those responsible must be brought to justice.

“I would encourage anyone with any information to come forward to police as soon as possible."