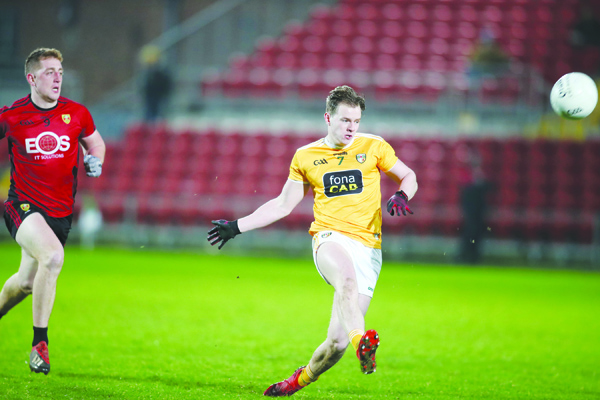 Antrim defender Peter Healy clears his lines as Down midfielder Seam Dornan closes in during Wednesday night’s Dr McKenna Cup clash in Newry. The Mournemen eased to an eight-point victory to book a semi-final meeting with holders Tyrone this Sunday

Bank of Ireland Dr McKenna Cup Section B
Down 2-17
Antrim 0-15
ANTRIM’S interest in this year’s Dr McKenna Cup came to an end on Wednesday night as Down eased to an eight-point win in Páirc Esler.

First half goals from Barry O’Hagan and Corey Quinn gave the Mournemen a platform and they rarely looked in danger with all but one of their tally coming from open play.

Quinn turned in a man-of-the-match display in a 35-minute cameo while Down’s subs contributed 0-5 in a commanding display from Paddy Tally’s men.

As his attention now switches to the forthcoming Division Four opener with Wexford later this month, Antrim boss Lenny Harbinson admitted his side were outplayed by one of the fancied sides for the Division Three title.

“First and foremost, let’s be honest – Down are a step up,” stated Harbinson.

“There’s no point in ducking around that. Their quality, especially in the final third, and their ability to work scores demonstrated that step up for me. They showed fast hands, quick movement and they were able to take their scores from a bit further out.

“Having said that, the first 20 minutes was reasonably nip-and-tuck. The referee, as in any game, can make a difference.

“Down had gone 0-3 to no score ahead and we had come back. The referee deemed that one of our players had a foot inside the ‘D’ when he received a kick-out. That led to the hop ball, which we won and then we lost it and one of their players blasted it into the net. All of a sudden we were 0-3 to 1-4 behind and that goal was a disheartening blow for us. To lose the second goal to a quick counter attack meant we were chasing the game.”

Both teams came into Wednesday’s game hoping to progress through to the semi-finals.

Antrim staged a smash-and-grab raid to defeat Fermanagh in Ahoghill with Paddy McBride’s late, controversial goal giving them a 2-8 to 0-13 win.

Down had previously beaten the Ernemen 1-11 to 0-7 in Brewster Park in the first round and Tally made several changes to his starting 15 with only Ryan McAleenan, Pierce Laverty, captain Darren O’Hagan, Johnny Flynn, Conor Poland and Pat Havern retaining their positions.

Antrim made eight changes from the side which defeated Fermanagh and Harbinson was forced to make a change in the opening stages. Full-back Ricky Johnston lasted just seven minutes after pulling up with a knee injury with Paddy Gallagher coming on in his place. By that stage, the hosts led 0-3 to 0-1 after scoring three points in the first three minutes.

Barry O’Hagan and Pat Havern (two) got Down off to a perfect start with Paddy McBride converting a free to open Antrim’s account on seven minutes.

The first 20 minutes were cagey enough with Down spurning several chances to add to their account midway through the first half.

However, they struck for their opening goal on 21 minutes when O’Hagan robbed Colum Duffin after the Antrim midfielder had won a hob ball. With the ball on the deck, O’Hagan reacted quickest to poke it into the corner of Oisin Kerr’s net.

The remainder of the half belonged to Down centre-forward Corey Quinn, who helped himself to 1-3 from play in a stunning salvo which gave the Mournemen a firm grip on the game. The Mayobridge clubman hit three points in quick succession before engineering Down’s second goal.

After darting his way through the heart of the Antrim rearguard, Quinn’s initial shot was blocked by James McAuley, but he gathered the rebound and composed himself to beat Kerr with a fine shot.

Full-forward quickly added a point from play with Antrim reliant on McBride’s free-taking to keep them in touch as Down took a 2-8 to 0-7 advantage into the half-time interval.

Both managers refreshed their teams for the second half with the impressive Quinn making way for the experienced Conor Maginn with Carryduff’s Daniel Guinness also coming on.

Ruairi McCann got the opening score of the second half from an offensive mark after referee Martin McNally didn’t award the Aghagallon man one in the first half.

Yet, as was the case in the first half, Down were able to pick off their scores much easier than their opponents with Havern and Barry and Darren O’Hagan reeling off well-taken points.

Indeed, the latter added his second point of the night with a brilliant long-range effort to put seven points between the sides with 20 minutes remaining.

Tally’s men took their foot off the pedal at that stage as Antrim staged a mini-revival.

The ever-consistent McBride was unerring from placed balls and the introduction of Adam Loughran gave them a new lease of life.

Colum Duffin should have forced Mark Hynes into a save when he fired over on 56 minutes while Loughran scored a point before winning a free which McBride converted.

Down’s subs helped them put distance between themselves and Antrim once more with Liam Kerr scoring two on his introduction while Hughes and Guinness also tagged on late points.

Loughran landed the last score of the game to put his name into the mix for a starting berth when Wexford visit Glenavy for their Division Four opener later this month.

Newcomers Gardner, Ronan Delargy and Eamon Fyfe also acquitted themselves well while Ruairi McCann could find more opportunities in the forward line this season in the absence of Matthew Fitzpatrick and Ryan Murray.

Ricky Johnston will also be hoping his injury isn’t serious with Antrim’s 2020 season set to begin in earnest on January 26.