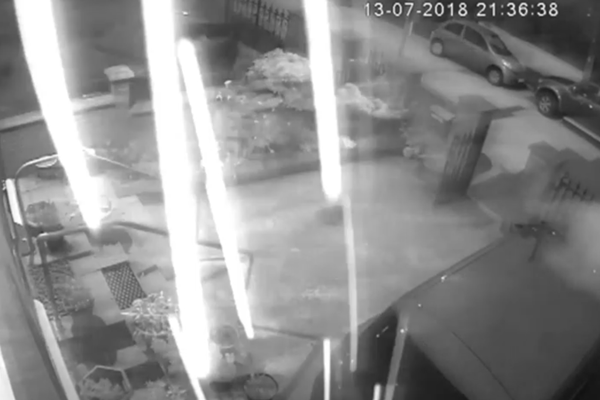 CCTV footage has emerged of an explosive device being thrown at the home of Gerry Adams on Friday night.

The recording, released by Sinn Féin yesterday (Sunday) and taken from a camera outside Mr Adams’ home, appears to show the device being thrown from a moving car.

"I am very thankful that no-one was hurt.

"Two of our grandchildren were in the driveway of my home ten minutes before the attack.

"I want to appeal to everyone to be calm. We are involved in a process of change and some people are resistant to change.

"If our families can remain calm then we are asking for everyone else to stay calm.”

Mr Adams asked for those responsible to meet with him.

"For those who were involved in the attack if they have the gumption to sneak up on our homes I think they or their representatives should come and meet me.

"I would like them to have the guts and the gumption to sit down and tell what this is about.

"We are very open Sinn Fein can be contacted through any of our offices. That's my direct appeal to them.

"Come and sit down and explain to me what this about, give me the rationale for this action."

SDLP Cllr Tim Attwood said: “The community are wholly opposed to those who want to bring us back to the past. We have a united message to these marginal groups, there is no place for violence in our society. We are moving forward to build a peaceful, more prosperous Belfast and a better Ireland. The message to these groups is get off the pitch immediately.”

A representative from the Workers’ Party said: “It has never been acceptable to bomb people, their families or their homes – it never will be. Irrespective of who committed these acts, they are repugnant acts of terror and the work of people who have nothing whatsoever to offer our society.

“This is the calling card of politically bankrupt gangsters.”

Alliance Party leader Naomi Long said: "This week we have seen those who remain wedded to violence bring chaos and fear onto our streets, in scenes which we had all hoped we would never witness again. We have all worked too hard and come too far to see the peace we have enjoyed put at risk by those who offer nothing to this society but destruction. Their recklessness and disregard for the community is clear in these attacks, undertaken in residential streets without any regard for the consequences.”

Sinn Féin Policing and Justice Spokesperson Gerry Kelly added: “These were reprehensible and cowardly attacks on the family homes of Gerry Adams and Bobby Storey. Grandchildren were in the driveway of Adams' home minutes before the attack.

“I would appeal for calm. These attacks are the desperate acts of increasingly desperate and irrelevant groups.”

A rally will be held in West Belfast tonight (Monday) at 7pm at the site of the old Andersonstown Barracks in solidarity with the Adams and Storey families.