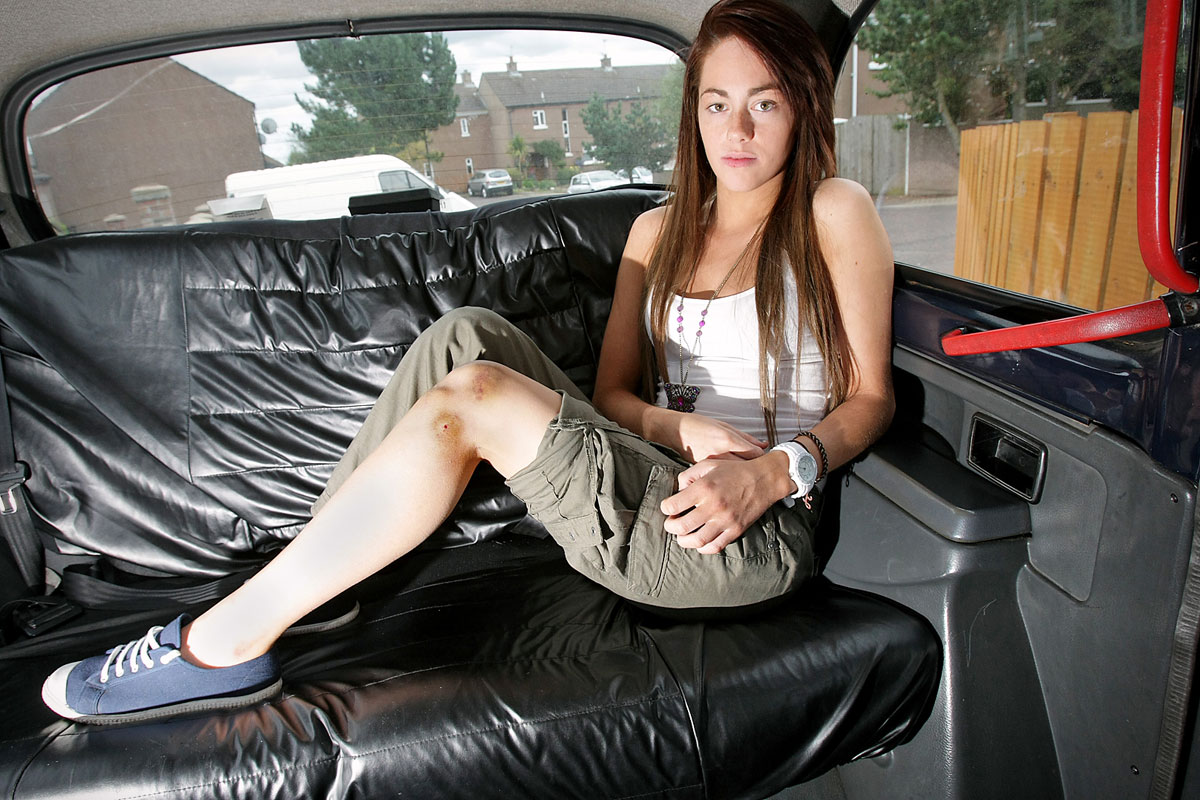 A terrified teenager has described the moment when she says she was attacked by a “crazed” taxi driver in West Belfast. Shauna Clarke was left with severe bruising, a chipped tooth and a limp following the wheel brace attack in Poleglass last week.

The slight 19-year-old was coming home from a night out in town with friends when the taxi driver launched the attack, as she explained.

“I had gone out last Tuesday night and got a taxi home from the city centre.  It was me, my boyfriend and my mate in the taxi, it was one of those private black taxis.

“We didn’t have enough on us to pay so my boyfriend asked the driver to take us to his house so he could go in and get an extra fiver.  When my boyfriend went into his house in Colinbrook, the driver kept saying ‘He isn’t coming back.’ I said he was because he lived in the house and would hardly leave me.

“My friend stepped out of the taxi and I was still inside waiting when the taxi driver leapt out of the driver’s seat, ran around and trailed me out of the back and on to the pavement and attacked me with a wheel brace.

“I was squealing because he was whacking me so hard on the knees, I fell to the ground and he kept hitting me. Whatever way he moved his arm, he chipped my tooth too.

“My boyfriend’s neighbour came out and that’s when he stopped and drove away like a total crazed nut.  I was in hysterics, there was so much pain in my leg.”

Shauna was able to give a detailed description of the driver to police, as well as other details.

“I wasn’t drinking so I was able to remember a lot, like I know it was a city centre taxi and not a West Belfast taxi because of the colour of the plate on the taxi.  My mummy drives a black taxi for the West Belfast ones so I know the difference.

The teenager is now waiting to hear if she requires hospital treatment on her leg.

“I went to the hospital after it happened but they said they can’t do anything until the swelling goes down, they said there is definitely damage to my kneecap.  I also have marks on my arm and a chipped tooth.

A PSNI spokeswoman appealed for information on the incident.

“Police can confirm a report was received of an assault in the Colinbrook Close area on Wednesday, 31 August,” she said.  “At approximately 2.30am it was reported that a 19-year-old female had been assaulted. She received bruising to her leg.

“Anyone who has any information about the attack is asked to contact police in Lisburn on 0845 600 8000 or if someone would like to pass on information without giving their details then they can contact the independent charity Crimestoppers on 0800 555 111.”