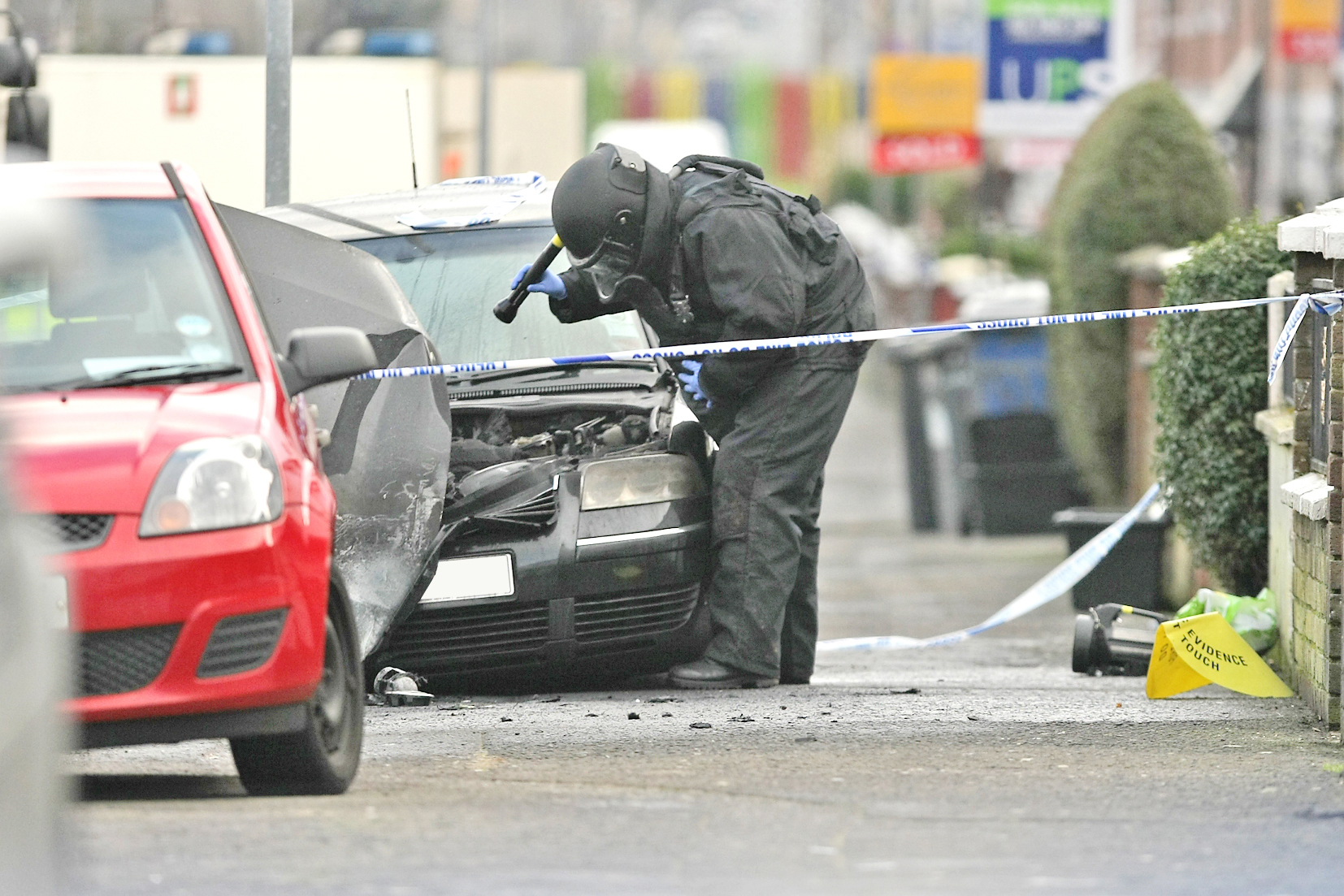 The criminal gang behind the murder of Belfast man Danny McKay was behind the recent spate of pipe-bombings in the north, west and south of the city, we can reveal.
The gang – Action Against Drugs (AAD) – planted the bombs as part of an escalation in its criminal activities, sparking fears of a turf war in the city. The pipe bombs, which were attached to petrol cans, are being made by a member of a well-known North Belfast criminal family, with long standing involvement in extortion and murder.
AAD – formerly Correct Action Against Drugs – was responsible for the murder of Mr McKay (36) at his Longlands Road home in October 2012. Mr McKay, a father-of-one, was shot six times as he sat alone on his living room sofa. He was involved in the North Belfast drugs trade, but at a relatively low level. He was murdered to send out a message to other, bigger players in the city who had rejected AAD’s extortion demands.
It is believed the grouping is increasing its extortion activities at local building sites targeting, amongst others, vital social housing projects. Last week a mechanical digger worth around £20,000 was set on fire and destroyed at a new social housing site on North Queen Street. Contractors have reportedly threatened to withdraw from a range of projects over extortion bids by at least three separate groups. However, the firms are remaining silent over fears for staff safety and the risk of further attacks.
AAD are believed to be one of the groups involved in these extortion bids – another is the dissident republican group Óglaigh na hÉireann (ONH). Both gangs use a veil of republicanism and ‘community protection’ as a cloak for their anti-community activities.
Speaking to the North Belfast News about the building site attack, Sinn Féin Councillor JJ Magee said: “There are a range of vital projects under way across North Belfast delivering much needed homes, leisure and educational developments and criminal gangs are extorting contractors.
“It’s utterly disgraceful that workers have been intimidated and plant machinery damaged on local sites by these criminals who are competing with each other to control the extortion.”
The recent increase in AAD’s criminality is thought to have been driven by the recruitment of a notorious thug who has served jail terms for robbery and gun offences. This man has had a number of fall-outs with leading crime figures and in recent years has been involved in a high-profile murder attempt. It is believed he was introduced to the group by the brother of one of AAD’s leading figures.
The pipe bomb campaign is being viewed as an attempt by AAD to flex its muscles in the battle with other gangs for control of the extortion business.
It is believed a pipe bomb recently found in North Queen Street had been abandoned as it was being transported to a local target. A local source said a high-profile police presence in the area spooked the would-be bombers and they ditched it before making off. The bomb squad later made the device safe.
The incident was one of four across the city at the start of February the PSNI believe may be linked.
The most serious attack occurred in West Belfast, where a bomb placed under a car in the St James’s district detonated, causing major damage to the vehicle. The third and fourth devices were found in South Belfast – one in Friendly Street in the Market area, the other in the Colinbrook area of Dunmurry. Both failed to go off.
In the wake of the attacks Chief Superintendent Nigel Grimshaw said police are setting up a special unit to hunt down the bombers.
"If any one one of them had have detonated, it could well have caused serious harm, or indeed death,” he said.
CS Grimshaw added that police are dealing with a “severe” threat, but wouldn’t be drawn on who police think carried out the attacks.