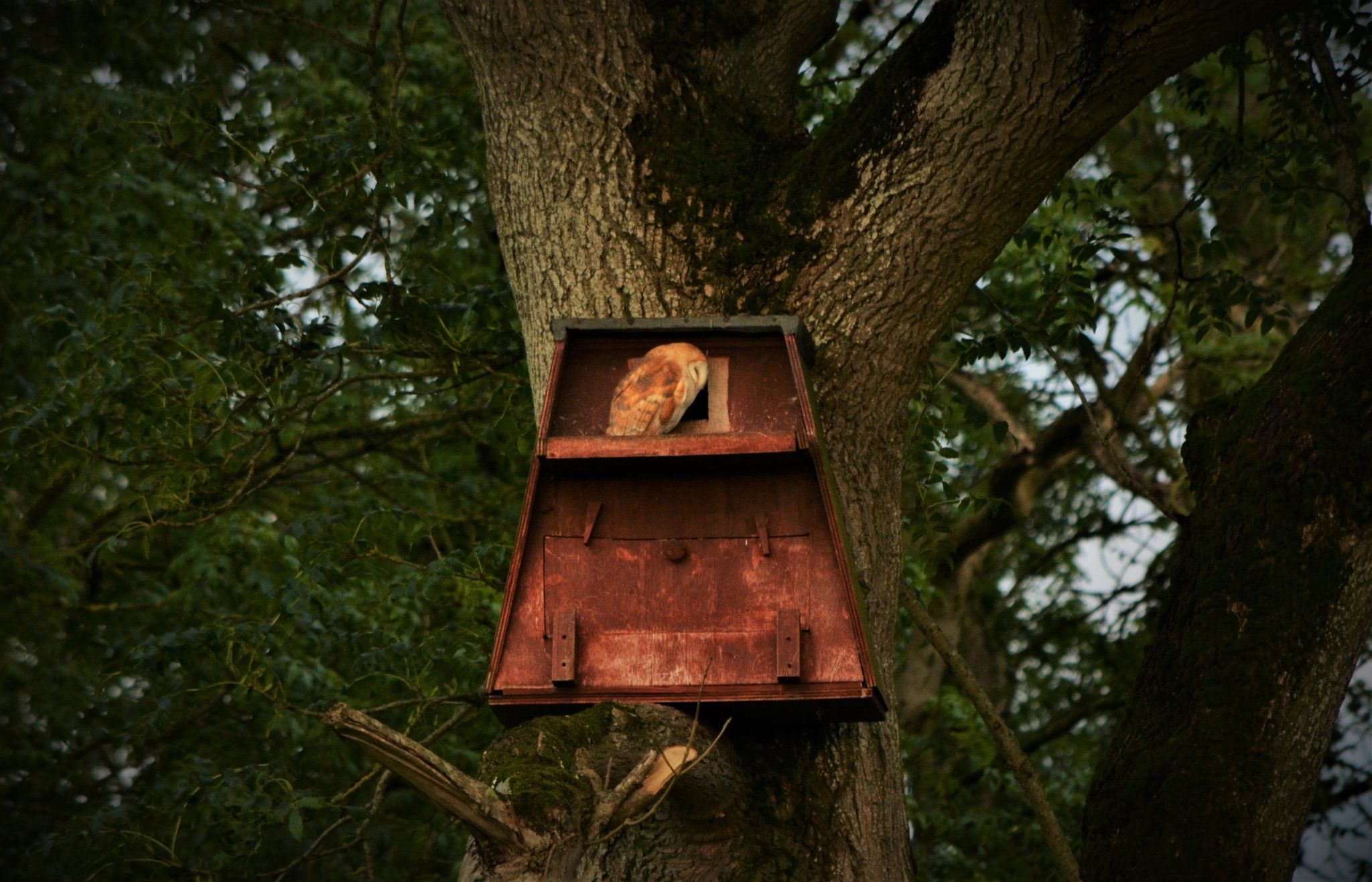 It’s the last of four chicks which were successfully reared thanks to Ciaran Walsh, the West Belfast nature supremo who now lives near Lough Neagh.

It’s a stunning pic – but Ciaran didn’t have to go far to take it. In fact, he just opened the curtains in his bedroom window. Because this year instead of Ciaran travelling to see breeding barn owls, the barn owls decided to come to Ciaran.

Ciaran put up 40 of these boxes around Lough Neagh but, as far as he knows, the birds have used just one – the one which he nailed to a tree right outside his bedroom window. It’s an incredible honour – but it’s hardly a lucky coincidence.

Every evening at the same time Ciaran goes on his rounds – leaving a few dead day-old chicks at strategic spots, as well as filling up containers with seeds to attract wild mice. The promise of bountiful food is too good for the owls to resist.

It was way back on Saturday February 1 when the first bird arrived at the box. Ciaran and his daughter were able to watch from the bedroom through a gap in the hedge as the male bird called night after night, looking for a mate. His answer came a full two months later when she arrived.

“That first night we sat up all night long,” Ciaran said. “And it’s been a great adventure ever since, until this last chick left last week.”

Ciaran’s fellow nature buff Aidan Crean was invited to ring the chicks – he even managed a personal first by ringing the mother as well – but Ciaran told Dúlra this week that he hopes never to hear reports of the ringed birds again.

“If I hear from them it’s normally that someone has come across one of their bodies. I want them just to disappear into the countryside, find mates and breed.”

Dúlra spent a magical night with Ciaran two years ago watching a pair which were breeding in a derelict cottage on the shores of Lough Neagh. They successfully reared five chicks that year – although the female bird has since been killed – Ciaran believes it ate vermin which had been poisoned in a nearby factory.

“Her mate is still calling, looking for her or for another partner. But there are so few barn owls that he’ll probably live out his days on his own,” said Ciaran.

Lack of suitable nesting sites is one of the biggest problems facing barn owls, scréachóg reilige, screecher of the graveyard in Irish. The old barns which dotted our countryside are gone or have been replaced with easily erected corrugated iron sheds that have no access for the birds. “The habitat is there all right – there are far more long-eared owls because they nest in trees. It’s only the barn owl that can’t find a place to breed,” says Ciaran.

In fact, they prefer buildings than even nestboxes, says Ciaran.

Ireland’s the last frontier for barn owls – they don’t exist much further north. Inside a house will be a couple of degrees warmer than a nestbox, which could make all the difference to the chicks or the winter roost.”

Ciaran knows how important it is to keep disturbance to a minimum, but it’s really only idiots who approach them at the nest site who will spook them. “They see us as the top predator and if we go too close to their nest they’ll consider they’re in big danger.”

On the other hand, they’ve been around people for thousands of years and lived in harmony with us. “The nest at the lough was at a working sheep farm, with the farmer there with his dogs every day. They didn’t mind that.

“And the pair in my garden watch me every evening as I walk down the lane with food. I whistle the same note just so they get used to me. They probably say ‘here’s yon eejit without a note in his head coming again’. But they don’t budge.”

Now that the chicks have left the nest, Ciaran can start touring the 40 nestboxes, cleaning out any that have been used by other birds like jackdaws or stock doves. And he’s got a secret up his sleeve when it comes to feeding the owls this year – automatic feeders that distribute regular food for mice that the owls love.

But Ciaran’s got another secret weapon – his two-year-old terrier-spaniel cross Tyto.
Tyto was well named – of course it’s nothing to do with crisps (imagine thinking such a thing? Who would ever... sorry Ciaran!) – tyto alba is the Latin for barn owl.
Incredibly, she’s the first in the world to be trained to sniff out barn owl pellets and droppings.

It used to take me about an hour and a half to check out a barn and the surrounding area for signs of barn owls, now with Tyto it takes just 10 minutes. She knows when they have been roosting on fence posts.”

Tayo’s expertise is now being followed by enthusiasts in Australia and England, where dogs are being trained to help in barn owl conservation.

Ciaran and Tyto won’t be sitting by the fire this winter now the barn owl chicks of Lough Neagh have taken to the skies. They’ll be out every day walking the fields and lanes, ensuring the barn owl doesn’t become another Irish extinct species.