DÚLRA: Fire fighters to rescue as terrier Mac gets stuck in 'bowels of the earth' 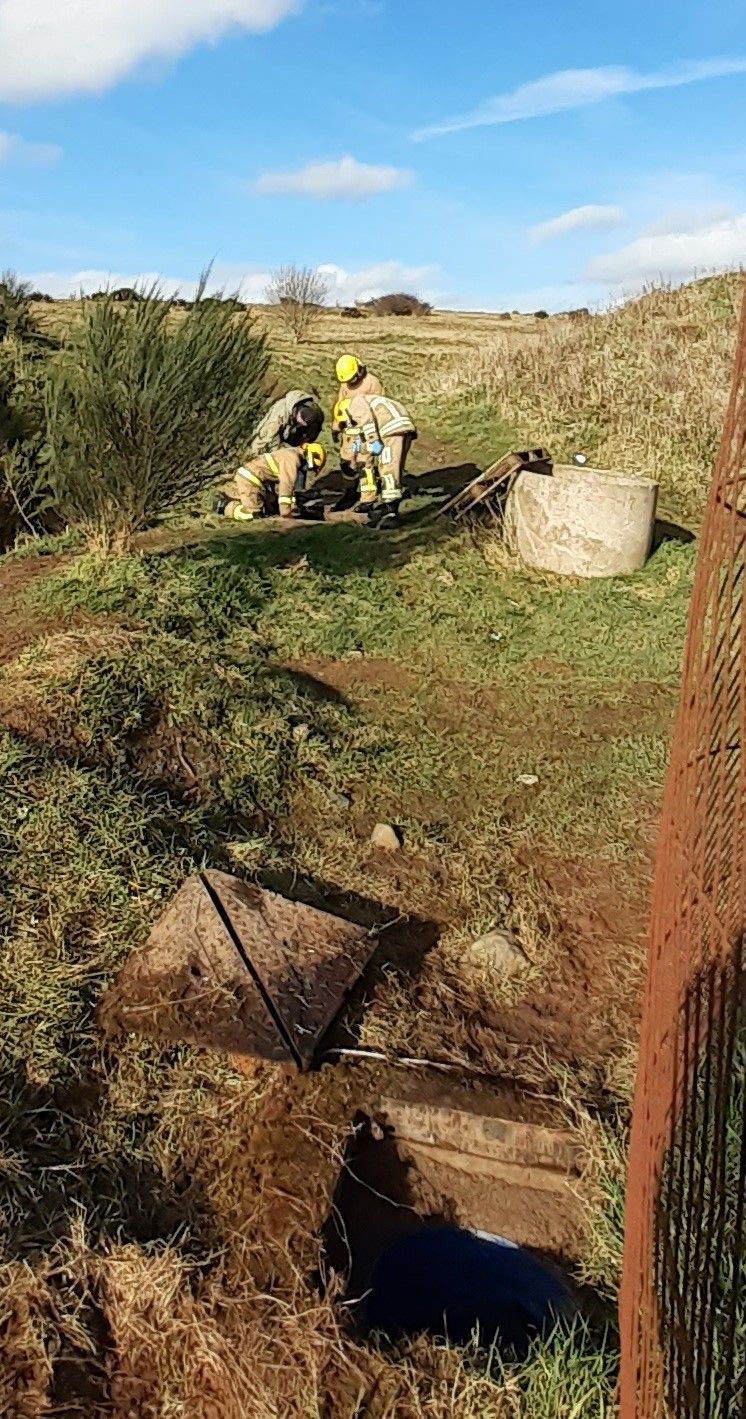 And he’s got a crack team of Belfast’s bravest to thank for that.

Because when Dúlra and Mac’s owner Andy Graham went out for a dander down at the docks on Sunday – to put up a nesting platform for a long-eared owl, but that’s a story for another day – he had no idea it would result in such worry and eventually elation.

We were getting into our cars – in fact Dúlra rolled down the window as he was driving away to ask Andy if he had Mac and Andy said he was hoping the dog was in my car. And so the drama began.

We got out and whistled and began searching for the wee terrier. Among thick grass at the side of the road we found an open plastic pipe, big enough for the dog to crawl into. We peered into the darkness and saw nothing – but with your ear close to the entrance, you could hear a low, deep growling and the occasional echoing bark from what sounded like the bowels of the earth.

He must have chased a foe down there – maybe a rat or a fox, we thought.

We called and called but there was no response. Could he have drowned? Could the wild animal he had been chasing got the better of him?

We called and shouted – sometimes friendly to coax him out, sometimes threatening to scare him out – but soon the growls disappeared and the barks became almost inaudible. And then they suddenly stopped.

We knelt in the mud at the entrance to the pipe and called and cajoled. Andy even played a squeaky toy sound on his iPhone. “He goes mad for squeaky toys,” Andy said. “If that doesn’t get him out nothing will.”

But there was just silence.

We shone torches from our phones down the tunnel – after about eight feet it became a T-junction, turning both right and left. It was so small the dog would have had to crawl – he couldn’t stand up. And he certainly couldn’t turn around.

There was a bar-covered manhole nearby – we peered in and there was a reflection of water about 40ft below. Mac wouldn’t stand a chance if he fell in.

We called and called but there was no response. Could he have drowned? Could the wild animal he had been chasing got the better of him?

You don’t want to waste the time of the emergency services, but Andy was getting increasingly desperate. You could see the worry etched on his face. Andy and Mac have been inseparable since he got him as a pup from a dog pound a decade ago.

We’ve all heard stories of how a loyal dog might sit on the grave of his master – well if we didn’t get Mac, Dúlra could well imagine Andy sitting at this open pipe for the rest of his life!

We had run out of options. And so Andy called 101 and asked for the fire service.

Incredibly, 20 minutes later we heard sirens breaking the Sunday afternoon calm. Could that be for us? Indeed it was – soon the fire engine carrying the red watch of Whitla Fire Station was pulling up beside us. Dúlra was able to stand to the side and watch these guys do their work. And it was awe-inspiring.

This may have been only a pet dog, but there was no lack of urgency. The five firefighters – all kitted out in full emergency gear and wearing masks – examined the entrance to the pipe and the surrounding manholes. Then they conferred together in a circle for a few minutes to agree a plan of action.

And they set about their work.

They got tools to open manholes around the open pipe, examining inside with torches and calling for Mac. They had torches and other instruments that Dúlra imagined was for testing for dangerous gases. By this stage the station commander William Sheils had arrived to oversee the operation.

But there was no sight – nor sound – or Mac. More than an hour had passed since their arrival and hope was obviously fading. Andy said openly he thought the dog was dead. But the firefighters were undeterred.

One called City Council to order maps of the underground tunnels while others were preparing more searching devices, including a thermal imaging camera.

Suddenly the operation shifted to around four hundred yards from the entrance of the pipe.  Here the firefighters lifted another larger concrete manhole. One young officer got the thermal imaging camera and was lowered in while the others held his feet. He re-emerged a few minutes later. “I see a wee tiny white dot about 30 metres down the pipe,” he said.

Again and again he was lowered down. He called Mac’s name up the pipe. “The dot seems to be getting bigger, as if it’s getting closer,” he said.

The next time he surfaced he asked Andy if his dog had a tag on it. Andy said it had a metal one hanging from its neck.

Andy suggested that he’d be the best bet to encourage Mac to keep crawling, and so they lowered him down into the manhole head-first, holding him by the legs.

Andy could see Mac some way down the pipe. Mac was crawling inch by inch using his haunches, with his paws stretched out in front of him.

“There’s like a mist in front of him,” Andy shouted up. “Could that be his breath?” The firefighters said it was – the dog was close to exhaustion.

Then with one big stretch Andy reached into the pipe and got the tips of his fingers under Mac’s collar and wrenched him out. There was a pop like a bottle of champagne being opened as the trapped air behind Mac escaped – that’s how tight the pipe was around his body.

The firefighters gathered around Andy, as delighted as he was. The tension had vanished from the air just like it had popped from the pipe.

“That’s our first dog rescue,” one said, “we’re all relieved we got him alive.”

Mac had travelled half a mile from the point he entered the pipe. “He’s one of the fittest dogs in Belfast – he’s climbed all the Munro and the Corbett mountains with me – and that made the difference,” Scottish-born Andy said afterwards.

"But I know that I would have lost him only for these firefighters."

It may have been another day’s work for Belfast’s bravest, but for Andy, it was a miracle.