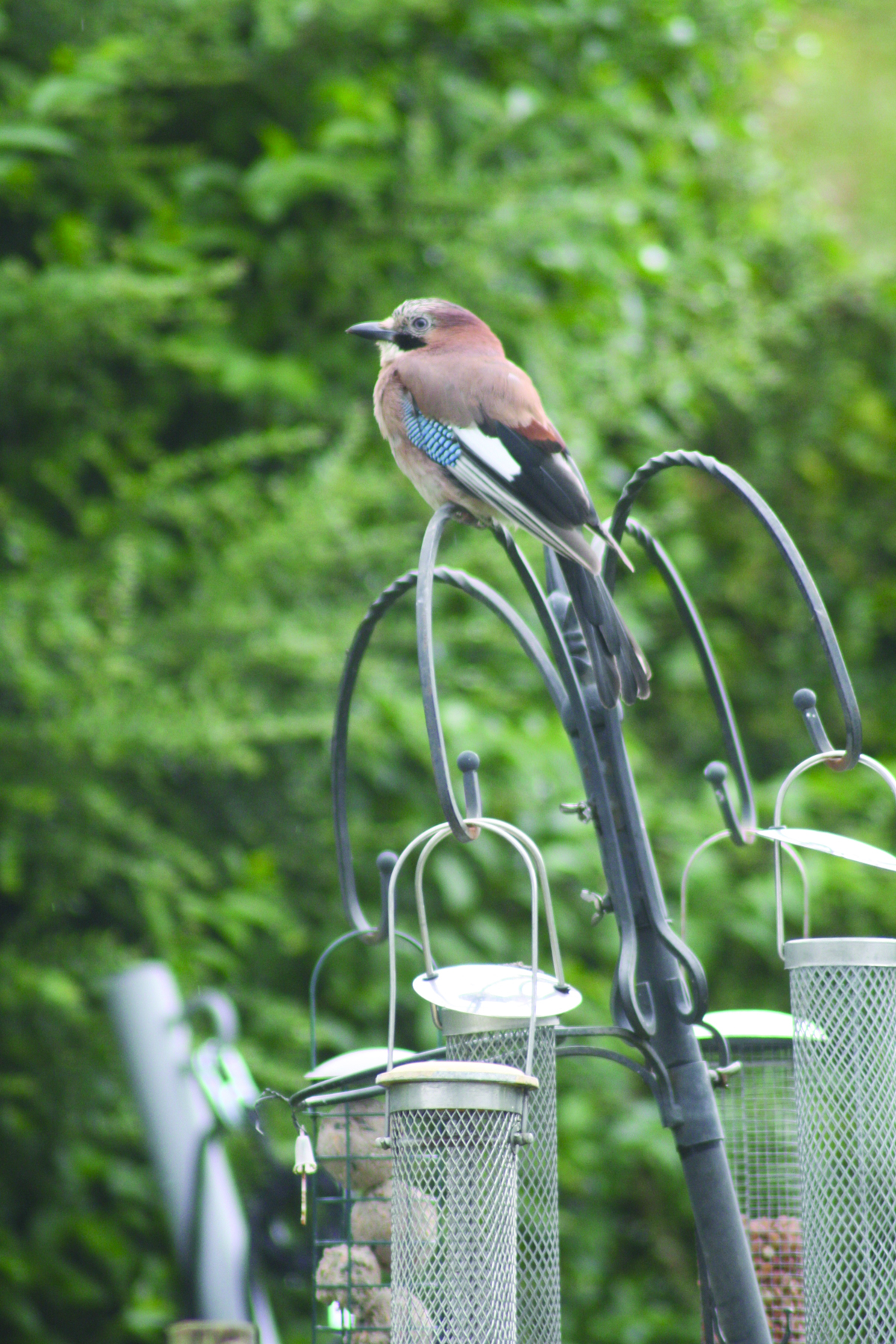 GUEST OF HONOUR: The beautiful jay perches on Dúlra feeders and surveys the territory

IT’S a shy, retiring creature with stunning good looks – a bit like Dúlra himself, some would say. And Dúlra feels as lucky as a lottery winner to have the jay grace his garden. He took this photograph at the weekend as the bird simply rested on the wire feeder in the back garden. It’s so unlike any other garden bird – in fact it’s so unlike any other bird at all.

It’s big, it’s colourful, but what really sets it apart is that it is also secretive. Most big birds throw their weight around, like the noisy and aggressive magpie. But the jay, screachóg in Irish, likes to keep itself to itself. It’s at home hidden deep among the leaves of our forests – and so a visit to a garden is a rare treat.

Dúlra never saw a jay when he was a youngster walking our hills, but he knew they were there among the trees, silently sloping away as soon as human feet touched the forest floor. One day while fishing in Colin Glen, he came across a fluorescent blue-barred feather – and knew immediately that it could only have come from a jay. He brought it home and kept it in a bird book – where it still rests today. But he never did see the elusive Colin Glen jay until about a decade later.

Today, their population is on the rise. Years ago they were often killed by foresters, and the fact that Ireland’s tree cover is so thin didn’t help. And that wonderful wing feather pressed in Dúlra’s childhood book was another reason for their persecution; firstly for fashion – one Russian royal was condemned for wearing gloves made completely out of these feathers; and then by trout fishermen who treasured them as lures.

But another reason for their low numbers is their love of oak trees. Even in Colin Glen, oaks – the national tree of Ireland and which supports more living things than any other tree – are uncommon. Jays love oak acorns, hoarding thousands of them every autumn, spending hours burying them and then digging through snow to eat them in mid-winter.

A for the acorns they forget, well, that’s why the oak doesn’t mind being plundered every autumn, because those forgotten seeds will grow into trees. But it’s not just acorns that they eat – but fat balls. Dúlra put the fat balls out for birds like blue tits, but the jay has got a taste for them. And this massive bird will demolish a fat ball in minutes (they only cost about 20p each, but it soon adds up). The jay, underneath that stunning coat, is still a crow and just like the magpie it will snatch other birds’ eggs and chicks, especially when it’s feeding its own young.

But this bird can’t be compared to the noisy, raucous, bullying magpie. This is a graceful bird that rarely leaves the shadows of the forest. Twenty years ago there were 10,000 jays here, now it’s nearly twice that. So Dúlra’s may not be the only garden it is visiting. And it could only cost 20p to attract them.

If you’ve seen anything interesting or if you have any nature questions, you can text Dúlra on 07801 414804.