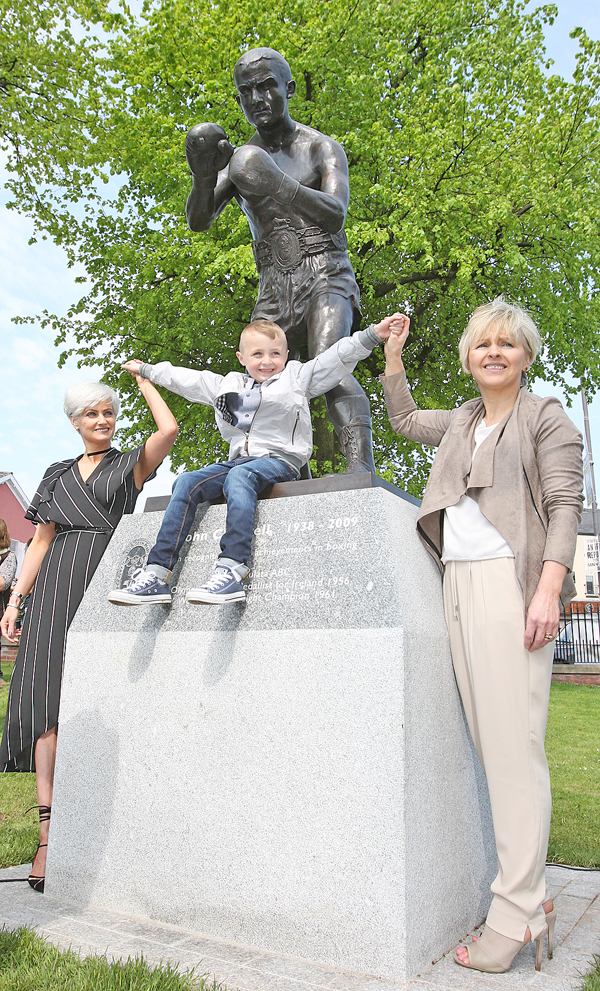 FAMILY, friends, and boxers past and present, turned out in their numbers at a sun-kissed Dunville Park yesterday for the unveiling of a statue in honour of an iconic figure in local boxing, Johnny Caldwell.
The Cyprus Street native passed away in 2009 aged 71, but left an incredible legacy, claiming a bronze medal at the 1956 Olympic Games in Melbourne before switching to the professional ranks where he won the British flyweight and then landing the world bantamweight title with a victory over Alphonse Halimi in 1961.
Having lost his title in Brazil against Eder Jofre, Caldwell was to take on his old Irish team-mate, Freddie Gilroy for the British and Commonwealth titles at the Kings Hall in 1962 on a night that lives in the annals of Belfast folklore. A cut eye saw Caldwell defeated, but he was to later claim both belts with a win over George Bowes two years later to cap a quite outstanding career.
It is a fitting tribute that such a revered figure in boxing circles was honoured in such a way on the Falls Road yesterday.
John’s daughters, Berna and Patricia uncovered the impressive sculpture that was created by Alan Beattie Herriot who also worked on the statue in honour of Rinty Monaghan. A third is to be unveiled in Woodvale Park next month.
Another of John’s children, Paul spoke of his and his family’s pride that their father was honoured by Belfast City Council in such a way.
“This is a very proud moment for the Caldwell family,” said Paul to the large crowd that included local boxers Jamie Conlan, Tommy McCarthy, Paddy Gallagher and Joe Fitzpatrick.
“We know a lot of hard work, time and commitment has gone into this so we are very thankful. On behalf of the Caldwell family, I would like to express our thanks to the Council.
“Although he won many titles, we purposely only had two of them engraved on the plinth as these are the two he was most proud of – his Olympic bronze medal and professional world title.
“People would think the world title is the one he cherished the most, but he always made it clear to us the one he treasured more was his Olympic medal because he was representing his country and he always said that pulling on the green vest and representing Ireland was his proudest moment.
“The fact that my father was chosen as one of the three statues is an indication of how highly he was respected as a boxer and that makes us very proud of his achievements.”
Paul said it is particularly fitting his father’s is immortalised in a part of Belfast where he grew up and said they hoped it will inspire the next generation of local talent.
“My father was born and bred in this part of the city and was always proud of where he came from,” he continued.
“It’s great the Council chose Dunville Park as it is so close to where he grew up. I’m sure when playing here as a child, he would never have imagined that one day he would be immortalised with a statue in the corner of it.
“In years to come, we hope the statue can inspire young people from the Falls to see what an ordinary fella from the road can achieve. Hopefully not long from now, there will be another world champion from the Immaculata.”
Paul also thanked the Belfast Boxing Ring and Alex Maskey MLA in particular for campaigning to have the three statues comissioned as-well-as Eamonn Magill and Hugh O’Halloran from the Belfast Boxers group for their hard work in making the occasion such a success.
Lord Mayor, Arder Carson echoed those sentiments and says it is fitting a sport like boxing that is woven into the fabric of Belfast be recognised in this manner.
“I’m honoured to be here today to help unveil the statue of John Caldwell and I think it is appropriate that we are not just in the west of the city, but in the area he was from,” he said.
“John was an Olympic medal winner and a world bantamweight title winner, so he is one of the legends in our city in relation to boxing.
“We know the contribution of the boxing fraternity in this city in terms of helping young people reach their aspirations in a positive, sporting manner. I would like to recognise all of the coaches and teams involved in boxing across the city, but today is about John.”