DUP will never agree to an Irish language act 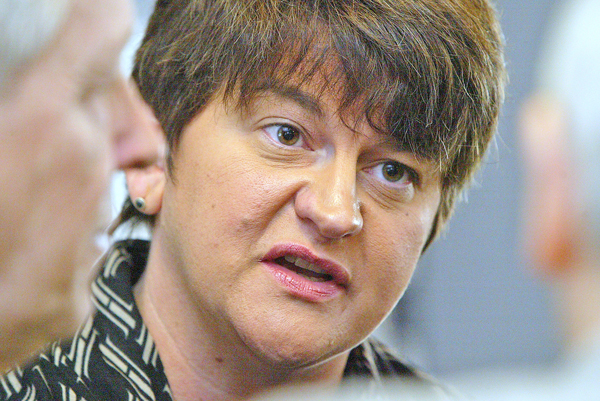 POBAL, the advocacy organisation for the Irish-speaking community, has said that Arlene Foster's comments about an Irish language act are “sectarian politicking”.

Janet Muller, Pobal’s Director, said: “Sadly, Irish speakers have learned to have very low expectations of DUP politicians, but these are entirely inappropriate comments from the leader of a political party, even in the artificial atmosphere of an election campaign.”

She added: “The 2011 Census shows 10.65 per cent of the population of the north has knowledge of Irish. It is time that our language rights were recognised and protected from this kind of sectarian politicking.”

Addressing a party event yesterday she suggested that perhaps a Polish language act should be implemented because more people here speak Polish than Irish.

Speaking about Sinn Féin’s desire for the act she said: "This characterisation of we should have given something to Sinn Féin to keep them appeased is not the way I do business." She then added: “If you feed a crocodile it will keep coming back for more."

Michelle O’Neill would say only that she was “not interested in negativity” while Gerry Adams responded to the jibe by saying “See you later, alligator.”

An Irish Language Act is a key factor for Sinn Féin going into the Assembly election.

SDLP leader Colum Eastwood tweeted: “Arlene Foster doesn’t get it. She’s entitled to disagree with us on Irish Language Act but she can’t insult us and sneer at an entire community.”

Naomi Long tweeted: “Time to quit the pre-match trash talk & act like leaders: show some respect, stop being divisive, and keep your promises.”