EAMONN’S MUM TELLS US: Now I can grieve 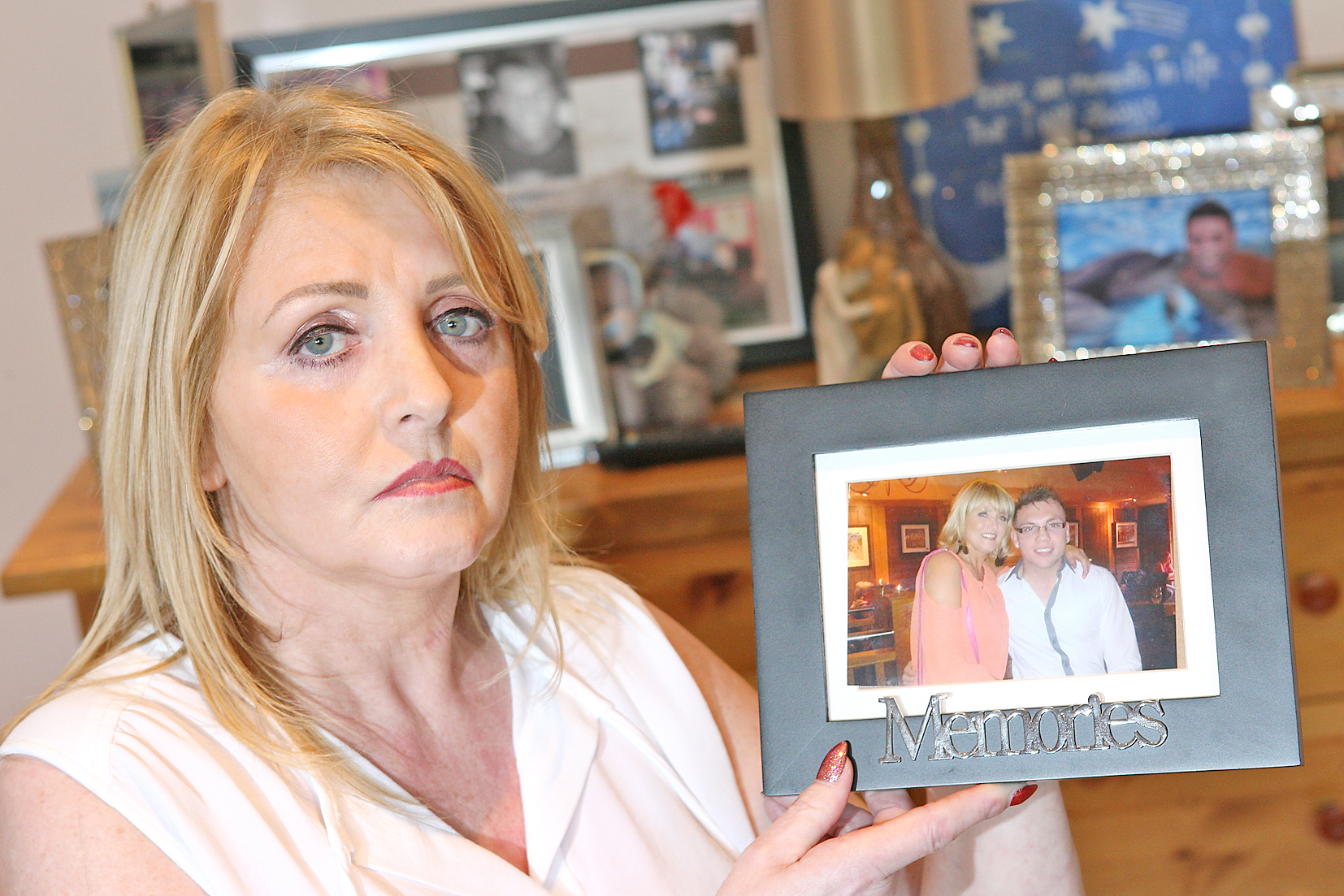 Mary Magee holds a photograph of herself and her son Eamonn

THE heartbroken mother of Eamonn Magee Junior says she can now finally grieve for her son after the man accused of killing him pleaded guilty to murder.

There were emotional scenes in Belfast Crown Court on Tuesday as Orhan Koca pleaded guilty to the 2015 murder of the young West Belfast student and boxer. 34-year-old Koca, of no fixed abode, admitted murder just as his trial was about to begin. 22-year-old Eamonn died from stab wounds he suffered in an attack at the Summerhill Park home of Eamonn’s girlfriend, Courtney Ward,  in May 2015.

Engineering student and rising boxing star Eamonn was following in the footsteps of his father, Eamonn Senior.

Mr Justice Treacy told Koca: “In light of the plea of guilty to murder the court must impose the only sentence permitted by law, and that is life imprisonment.”

Speaking to the Andersonstown News, Eamonn’s heartbroken mother Mary said: “Maybe now I can finally grieve, maybe I can turn a corner, Eamonn wouldn’t want to see me like this.”

Mary said: “We did everything together, he never left my side, he was my youngest, my baby, we even went away on holidays together, that’s how close we were.”

Talking about the man who killed her beloved son Mary said: “He has gone through six defence teams and now he finally pleaded guilty, maybe it was the fact that the jury was sworn in and the witnesses, maybe the seriousness of what he has done finally hit him.

“Poor Courtney was in bits in court, Koca had been bombarding her with calls and texts he was also stalking Eamonn’s Facebook and the police know this. They have all the texts and information from the phone company. He has shown no remorse.”

Mary says that although she is trying to begin rebuilding her life there are some days when she just can’t face it.

“My son Francis wants to go to Australia and I’m afraid to let him out of my sight. This has had a terrible effect on him and on all of us.

“I don’t know how I am feeling, I’m up and down. Some days I lock myself in my room when I just can’t face the world. I cried all day last Tuesday knowing I would have to go to court.

“Eamonn’s daddy is gutted, he needs to know what sentence will be handed out for the murder of our son.

“It’s not just me and Eamonn’s daddy, this has rippled through the entire family. His poor granny is in a terrible state, we’ve been in limbo since it happened.”

Discussing that fateful night when her son was murdered, Mary said: “My poor Eamonn came down the stairs that night as jolly as could be. He said, ‘Mummy have you a tenner so I can get a wee pizza later on tonight.’ He texted me later and said, ‘Mummy I’m going to stay out tonight, I’ll see you in the morning’ and you know the rest.”

It has been almost two years since Eamonn’s tragic death and only now are his family feeling strong enough to make arrangements for his headstone.

“Maybe now with the guilty plea and with Eamonn’s headstone going up we might get some closure,” said Mary. “People say they know what I’m going through but they don’t. Only another mother who has lost a child can understand the pain. I know people are trying to be nice but they don’t know the half of it.”

Showing us around Eamonn’s bedroom Mary said: “I love opening his bedroom door because I can feel his energy going all through the house, I cling to my good memories.

“His bedroom is exactly the same as the day he left it, he changed his bedclothes that day and I’ve kept them the same since.

“It’s such a waste, look at all the medals he won. He was a real charmer. The girls loved him. I get my strength from Eamonn. I can feel him with me, we were so close. I know he’s still with me. There are days I lock myself away, but my wee grandson gives me a reason to carry on.

“I’ve given a lot of his clothes to Zambia, I’ve kept some of them and I’m going to get them made into two quilts for me and his daddy. There are some things that I just can’t part with.”

Describing her beloved son Mary said: “I never had a minute’s trouble from Eamonn and all his school reports were always really good, he was a beautiful child. He had a girlfriend called Laura and she and her family were a brilliant influence on him, they taught him that he could achieve anything he set his mind to as long as he was prepared to work hard, he was going places. He was either taking a class, training people, training himself or studying.

“Eamonn achieved so much. He was so highly thought of. I am so proud of the good child I brought up. I’m going to allow myself to grieve properly now and I’m going to live off the good memories.”

Mary continued: “I have a lovely photo of Eamonn and his daddy. He had just lost the Ulsters, a title his daddy had previously held and to be honest everyone thought Eamonn had won it. Big Eamonn thought he was going to pass on the trophy to his son that night but it didn’t work out that way. The wee fella who won it came to the house during Eamonn’s wake and gave me the winner’s medal. He said, ‘I’m just here to give this medal to its rightful owner.’ I was so touched, it meant the world to us.

“We will never get justice because Eamonn is dead.  This sentencing is the best we will get. How dare he do what he did to my son and my family? It’s such a loss and I’m only now realising that my son isn’t coming back.

“You live for your family, so that’s what I’m going to have to start doing again. Eamonn’s sister Áine is due to give birth any day now, she is having a wee boy and he will be called Eamonn. We are all so excited and can’t wait to meet him.”

Orhan Koca is due to be sentenced for the murder of Eamonn Magee Junior on  May 5.