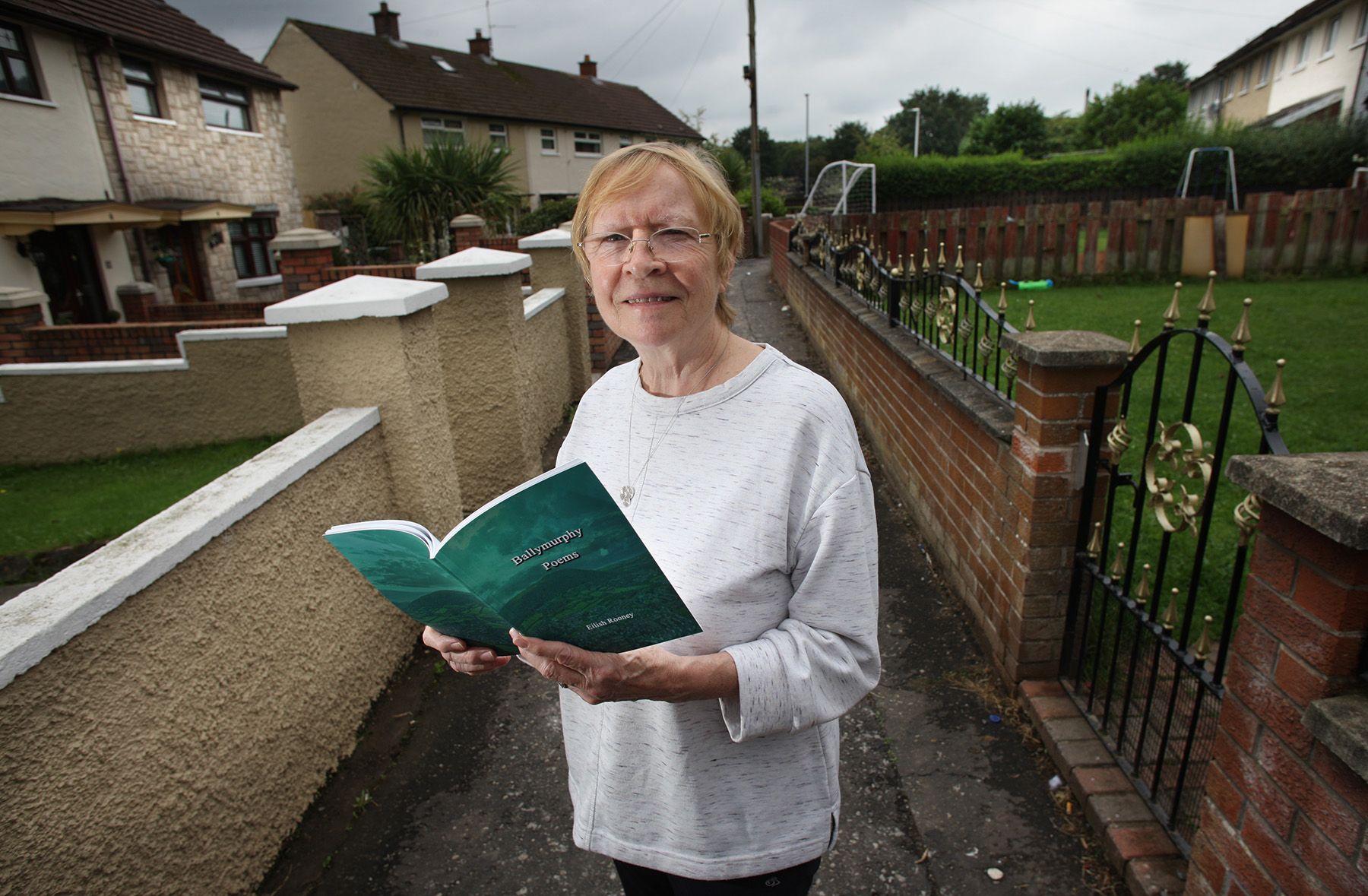 POETRY: Eilish has written a book of poems which will help raise money for a memorial garden to the victims of the Ballymurphy Massacre

BALLYMURPHY native and community stalwart Eilish Rooney has put pen to paper to publish a book of poems charting the Ballymurphy massacre inquest and commemorating the victims.

Discussing how the idea for the book came about, Eilish said that she was sitting in the court as a supporter of the families and began to take some notes.

“I found the experience of the inquest at times to be very tough and I took notes on anything that I thought was striking.

“As time went on, things happened that I found remarkable and these are reflected in the poems. When the inquest was over I started to get the idea that some of these notes that I had taken could make the subject of a poem.

“To begin with, it felt like one particular poem needed to be written. The very first poem, ‘Waste Ground’ was written on the basis of listening to military evidence at the inquest.

“When I started with that, I didn’t have any notion of publishing these poems. As I stayed with the writing of that poem I began to think of other notes that I had taken down and also the experience of being there.”

Recalling her experience of attending the inquest, Eilish continued: “There was one day that a member of the families who sat in the jury box facing the witness box, listening to a senior military figure giving their evidence. She didn’t look at him, she looked at the wall beside him the whole time he was giving evidence.

“That experience struck me as a remarkable way to refuse to give your attention to the witness in a way of protest.  It reminded me of a colleague at Ulster University who did research on Palestine and she observed women who wouldn’t look soldiers in the eye. It reminded me that if you have nothing else with which to protest, the women in Jerusalem used their eyes and their bodies as a form of protest.

“Each poem is a reflection of some of the experiences that the families went through in the inquest. When I got a number of the poems written I started to think about writing a poem for each of the Ballymurphy families and their loved ones.”

Eilish said that she started writing some poems based on the personal testimonies that each family submitted to the inquest which she got access to thanks to the families and Ciarán Cahill at Springhill Community House.

“I didn’t disclose at this stage that I was writing poems until after I had a set written.

“I used material from each of the testimonies to write a poem about each person, including their name, date of birth and death date.

“When I started writing those poems they took a shape of their own. Some were long, some were short and I started to think about how the families may feel about getting poems that are different lengths.

“One of the most famous forms of poem that are written is a sonnet. It is something that you write for a special occasion and has lots of rules. One of the rules of a sonnet is that it is 14 lines long. I decided to adapt this and develop a sonnet for each person.”

Detailing the response of the Ballymurphy families to her poetry, Eilish said they have been grateful.

“It has met with a great welcome from them, friends and neighbours. The books are free but the families are asking for a donation of £5 to raise some money for the memorial garden that they are fundraising for at the moment.”

She continued: “I would very much like a reader to grasp the significance of the introduction of internment on the Ballymurphy area at the time and to have some sense of this assault on the community.

“On another level I would really like readers to come to some grasp of what it was like for families during the inquest who sat for days listening to the evidence. I would also like them to realise that for the families, for the wider community and indeed even for the courts, the verdict of the inquest was a significant and profound achievement.

“Also, I hope that readers get a sense of the individuals who were killed. I would like to extend that sensibility of reading about the individuals to the experiences of the conflict that we have all had.

“It applies to the individuals of the Ballymurphy massacre but in as much as it was possible, every individual who lost their life is entitled to a poem. Perhaps some family member will write a poem about them as poetry captures a depth of feeling and knowledge that other forms of writing don’t.”

in Mayr and John's family of four

in Portaferry. He loved the sea.

He was a curate in Corpus Christi.

Worried about trouble in Ballymurphy

that day, he asked my mother not to visit.

So I listened to the news and knew

it was him — a priest shot dead on waste ground.

He phoned the army base to say a man

was in trouble and he was going out

to help him. Crossing the field, he waved

a white cloth. The soldier saw and shot him.

My crying is done. The families fight on.

Justice for my brother and all the innocent.