DÚLRA: Everything in place for kestrel moving day 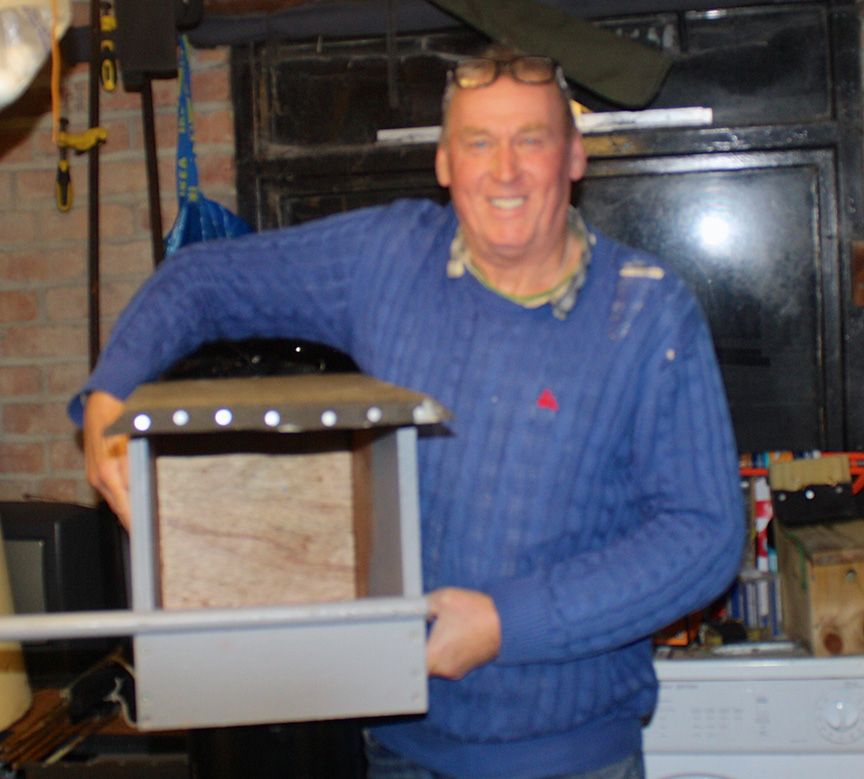 HOME FROM HOME: Andy Graham with one of the new nestboxes that he has made

IT was a problem that needed an ingenious solution – and we may well have found it thanks to a feat of engineering.

A pair of kestrels have taken up residence at Giant’s Park down by the docks. They’re there every day, swooping and hovering over the vast grassland, eyes trained on the ground below for the tiniest movement from a mouse or meadow pipit.

These fabulous, crimson-backed birds were once our most common raptors, but they have been poisoned almost to extinction in the last decade or so. Up until a few years ago you were guaranteed to see a pair hovering above the verge of the M1 at the Bog Meadows. But poison was laid for the vermin they fed on, killing them too.

They were forced to retreat and their realm shrunk to the poison-free upper slopes of the Belfast hills.

When Giant’s Park appeared out of the sea on top of countless tons of city rubbish, the kestrels weren’t slow to embrace it. They love the seclusion there – as do many other species of birds which the kestrels can easily ambush.

But there’s a snag – they have nowhere to nest.

And so they decided to commute. They flew from their nest on the cliffs of Cavehill all the way down to the shore. When the hungry chicks were born, they took the five-mile round trip over north Belfast’s chimneys many times every day, bringing their young food from the park.

That got some environmentalists thinking. Would it be possible to offer them a nest site in the park itself? There are no cliffs here where they normally nest, and indeed nowhere a kestrel nestbox could even be located. This is a windswept vastness where gusts sweep over the sea-level plain.

But there are a couple of bizarre vertical objects that predate the park. Along the shore two tall lamppost-like metal poles rise from the rocks, posts whose original purpose has long been forgotten. They’d make ideal locations for a nestbox all right, but how could it be fixed on? Most nestboxes only need a few nails to attach them to a tree or a wall, but this was a whole new conundrum that needed the sort of engineering imagination that built boats like the Titanic just across the way.

Step forward Andy Graham. He’s responsible for peppering the Cavehill with scores of small nestboxes. A joiner by trade, he knew there was no way to safely fix a giant kestrel nestbox onto the side of a pole like this, especially one right on the shore with its howling Irish Sea gales.

So he got to work, first to make the boxes themselves. Andy (above), a former joiner who for years worked on North Sea oil rigs, got the recommended measurements and made them to the exact millimetre. He asked some nearby companies for help and found that they were only too willing to do their bit for the natural world outside.

The wood was cut to measure, fastened with heavy screws and all joints treated with fibreglass sealant. Not only the roof was covered with felt, but the floor inside as well so the birds have a carpet. Then it was coated with Isopon resin and given a lick of outdoor paint. If the kestrels were to move in here, they’d feel like they had the penthouse at Donald Trump Tower.

But the biggest challenge was how to secure the box to the post. And it needed an engineering solution.

Andy borrowed long ladders and measured the circumference of the pole at the top. It was 195mm. His experience of oil rigs probably influenced his plan to attach an industrial pipe to the bottom of the box so the whole thing can be slid over the top of the pole.

Colin Alexander of MFP on Dargan Road was only too willing to donate the pipe – he can actually see the proposed nest site from his factory.

Andy went to work, screwing the pipe securely to the bottom of the box, gluing a rubber rim along the inside to ensure that it would fit snuggly.

Everything had to be exact down to the last millimetre, but, if it works, kestrels will be welcoming boats to Belfast harbour long after all of us are gone.

Next week is the moment of truth. Dúlra will be there when the new kestrel nestbox is dropped into position. And with a home fit for a king, the regal kestrels will surely come.

l If you’ve seen or photographed anything interesting, or have any nature questions, you can text Dúlra on 07801 414804.