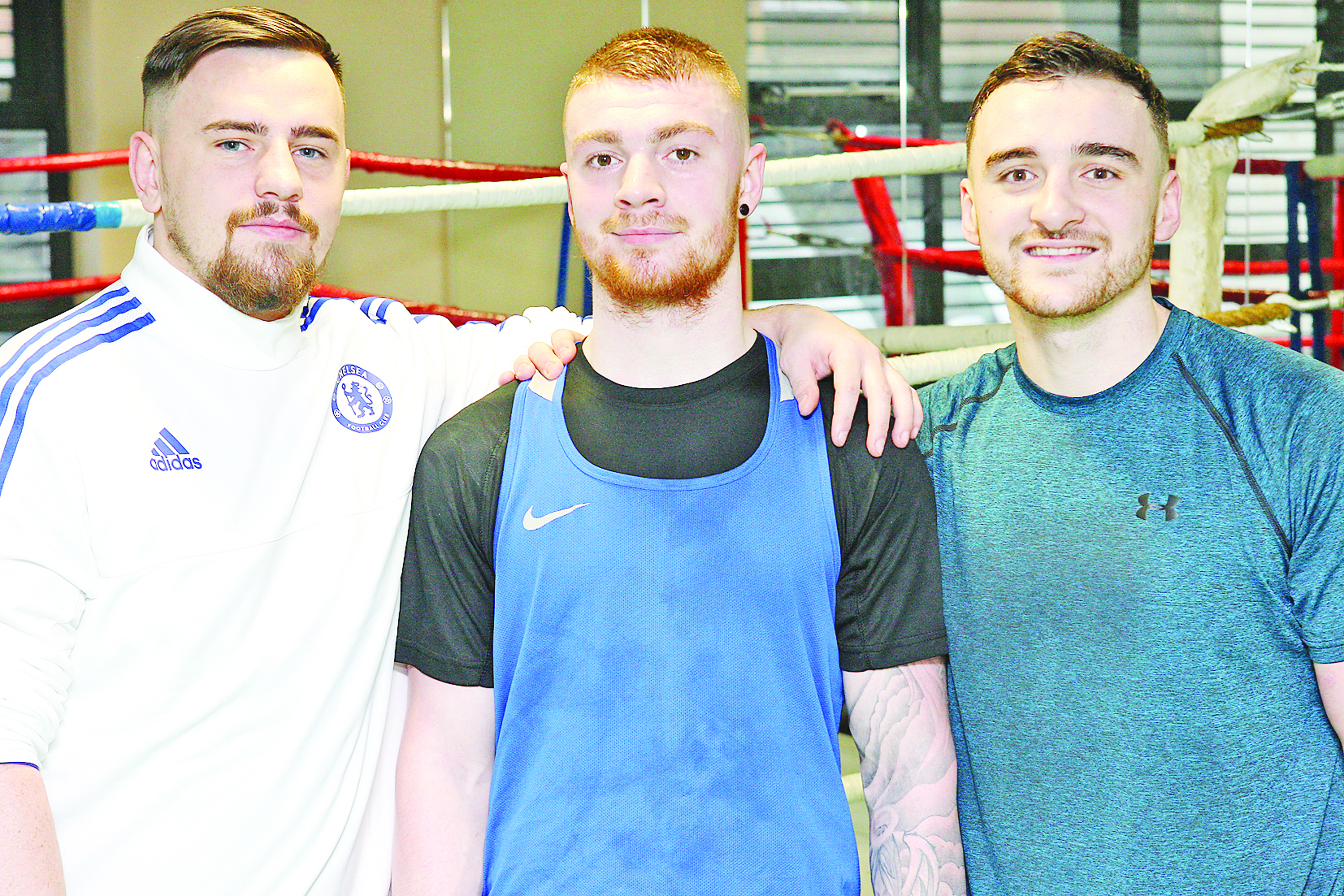 THE image of a boxing coach is rapidly changing with the new age of young coaches who have fresh ideas and new methods coming to the fore.

Throw in the experience of having boxed as a professional and you have a perfect mix and that is the case with two of West Belfast’s newest cornermen, Ray Ginley and Dee Walsh.

Between the pair of them, 23 year-old Ray and 26 year-old Dee have had 18 pro fights, winning them all but with the desire to lace up the gloves themselves gone, it was a natural progression for the pair who have a deep love for the sport to remain involved so coaching was an obvious destination.

Already, they have begun to build up a stable of boxers who are based at Emerald Boxing Club on the Suffolk Road with Gerard Healy, Matthew Fitzsimons, Lewis Crocker, Joe Hillerby and Stephen Webb all pounding the pads and bags and the hope is that this new stable can enjoy a bright first year together.

“Now I’m into coaching, it’s like a new lease of life as I love this more than I loved boxing,” said Ginley.

“I loved the boxing training and sparring, but I didn’t like the bit when you had to get in and fight. Some people thrive on that, but I hated fight night as I was a nervous wreck.

“Now I’m doing what I love and I get to work with boxers and do their strength and conditioning work with them.”

Ginley says the move into coaching wasn’t one he had necessarily planned, but when opportunity knocked it was impossible to turn down. While some may look at the 23 year-old and think he couldn’t possibly have the experience to thrive at this stage, he disagrees.

“Manny Steward never intended to be a boxing coach, but at 26 his younger brother asked him to coach him and he ended up guiding him to the National Golden Gloves,” he countered.

“After that, a few more boxers came on board and he did the same thing. He is now known as one of the greatest coaches of all time and he started at the same age as me and Dee.

“If I had the chance to serve an apprenticeship then yes, absolutely, but those opportunities don’t exist here so we are just trying to study the game as best we can and trying to get our boxers to perform to the best of their ability.”

Performing to the best of his ability was something Dee Walsh did on a regular basis. For those who watched ‘Waldo’ in action during his career in the ring, there was a sense big things lay ahead, but the St James’ man had his fill of many aspects of the pro game and decided to call it quits.

However, like Ginley, the interest in the noble art didn’t fade and a chance meeting paved the way for his return to the gym, albeit outside the ropes.

“In a way I did miss boxing and I would still watch it on TV, but the motivation and hunger was gone,” he explained.

“There were 20 reasons why I packed in boxing. People think you are mad, but when you go through all the reasons then they understand.

“These fellas will have to do similar but I have been there and done it the hard way so I can help these lads through.

“I saw Kieran Farrell (former boxer now promoter and manager who signed seven local fighters last week and will run a show at The Devenish in April) putting on Twitter for any English or Irish boxers who wanted to sign as a pro to give him a shout.

“I had been training Matt (Fitzsimons) and I saw how talented he was and I wanted to see him doing well.

“It had been a year and a half since he last fought so I tagged Matt in and they got chatting. Kieran then contacted me saying how things were going to be in the future and I thought it would suit Matt down to the ground. Matt then asked would I train him.

“I would be with Ray nearly every day anyway and we had no plans of this happening, but when I went to see Kieran, Ray was there with Gerard (Healy) and Joe (Hillerby) and he mentioned he has this place (Emerald) free in the mornings and would I want to come here and we would all do it together so it all fell into place.

“Ray is the main trainer but I’m helping him and we all help each other.”

Walsh was known as a slick boxer with an incredible skill-set so knows exactly how a boxer with a similar style should perform in the ring and believes that poor advice can be a boxer’s downfall.

“There are a lot of myths about boxing and people would put stuff in your head that was nonsense, so I’ll not be teaching anyone that kind of stuff,” he stressed.

Walsh will mainly be training Fitzsimons, but says he and Ginley will be helping each other out with all of the boxers in their stable including Crocker who is seen as a huge prospect.

“Ray is his trainer, but I’ll be helping him and we are hoping to have him out on the Jamie Conlan bill at the Waterfront (February 18) because he’s with MGM,” explained Walsh.

“I think I saw Lewis box years ago against Germany and when he landed a shot you could hear the ‘ooohhs’ from people. Even then he could punch, but seeing him in the gym and on the track, he’s a complete athlete and is going the right way.”

Certainly, the opportunity to work with such an exciting talent is one that will draw attention to the new coaches who are both predicting big things for the former Holy Trinity amateur.

Crocker had initially begun working the John Breen when making the pro switch, but he had been doing his strength and conditioning with Ginley and a session on the pads prior to his proposed debut on November 5 that fell through due to the need for nose surgery proved to be a turning point.

“The chemistry was brilliant between us and two weeks out I took him on the pads and he loved it,” explained Ginley.

“He then asked would I train him so with someone as talented as Lewis, I jumped at the opportunity and we have been doing that for the last few months.

“Things are progressing well. People know Lewis now, but he was never 100 per cent committed to camp, training consistently and doing a proper strength and conditioning programme, so nobody has ever seen his full potential. He’s got it all.

“Frampton isn’t Tweeting things about him for no reason and McGuigan isn’t flying him over to camps in England for no reason. They know boxing and see what I see in him.

“I have had the body guard on for heavyweight and cruiserweights, but none of them hit with the power and explosiveness he does. I can’t see any welterweight holding up to his power.”

For Crocker, the chance to work full time with Ginley became a natural progression given the bond that had built between the pair and he says things are looking good for the year ahead.

“The nose operation was a bit of a blessing in disguise as I wouldn’t be with Ray or MGM if that didn’t happen, so it was a good thing in the end,” he said.

“He started taking me for strength and conditioning and I really enjoyed working with him on the pads.

“Even just talking to him, I could see he understood the game and we could talk about stuff, so it was great to have him there.

“Things just progressed and the chemistry built up and here we are.”

The chemistry between a coach and boxer is vital with a perfect example the bond between another young coach, Shane McGuigan and Carl Frampton. Ginley and Walsh understand boxing inside out. They know what works for a fighter having been there in recent years and the intention is to create that bond between their stable to help each boxer go as far as they can.

“Shane McGuigan is another young lad in his 20s and he is doing great work with the lads he has,” notes Ginley.

“Some people just understand the game. Anyone can look like Roger Mayweather on the pads, but there is so much to it.

“It’s about getting to know your boxer, what makes him tick, what works for him and what will get him going. That’s what we want to create in the gym, a family atmosphere and that when they go out on fight night there is a team behind them that is 100 per cent behind them.”