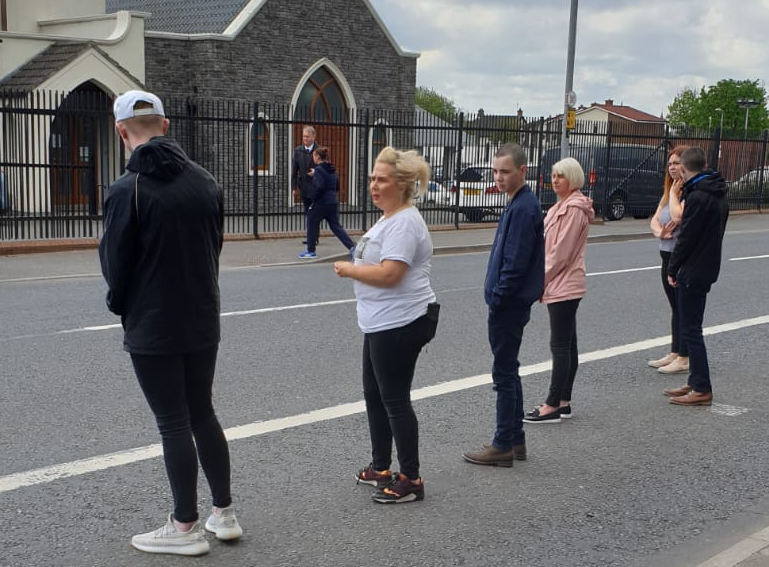 THE niece of a West Belfast woman who died from Covid-19 has told how she is “lost” without her 91-year-old aunt.

Isabell Moreland – who was originally from the Falls but had lived much of her life at Kenard Avenue in Andersonstown – died at Brooklands Care Home on Sunday. Earlier this month, her family were told that she had developed Coronavirus-like symptoms, but had tested negative.

However, they had been unable to visit her due to the Covid-19 lockdown.

On Friday a second test was carried out due to Ms Moreland’s deteriorating condition, which returned a positive result.

Speaking to the Andersonstown News, Alice Adams described her heartache following the loss of her aunt, who she described as her “second mummy”.

“She was a wee angel,” said Alice.

“She never drank or smoked. She worked in the Mill. Loved her wee cups of tea. She was just a lovely person.

“I don’t think there are any words to describe her – I’m just lost without her.

“I couldn’t get to see her for six weeks because the nursing home was in lockdown. I always thought I would get to spend time with her. They did offer for me to go down on Saturday, but they had to tell me that if I went down, and she was positive, then I would be going out positive and would have to isolate. If anything had happened I wouldn’t even have been able to do what we done for the funeral yesterday (Tuesday).”

Alice said her aunt had been in “brilliant health” other than up until she had a fall two years ago.

“She was in good health,” she said.

“When she had the fall she went from the hospital to Meadowlands, and then on to Brooklands.”

Young people from CYDC have long been engaged in outreach programmes at Brooklands, which has seen them form close friendships with residents, including Ms Moreland.

“I can’t thank the staff at Brooklands enough – they are brilliant, you couldn’t repay them,” Alice said.

“Those kids are fantastic too. Poleglass always gets a bad name, but look at those kids. There’s always good there.”

While unable to hold a traditional funeral, Alice said she was “glad” her aunt got a “beautiful” farewell.

“I just couldn’t do it if it was going from the funeral directors straight to cemetery,” she said.

“I had spoken to my brothers about doing what we did, and then we had a family friend playing the pipes.

“It was absolutely beautiful. The turnout that she got was amazing. We couldn’t thank people enough.”

She added: “It just seems surreal that we didn’t get to see her in the coffin.”