Extraordinary kindness across all communities 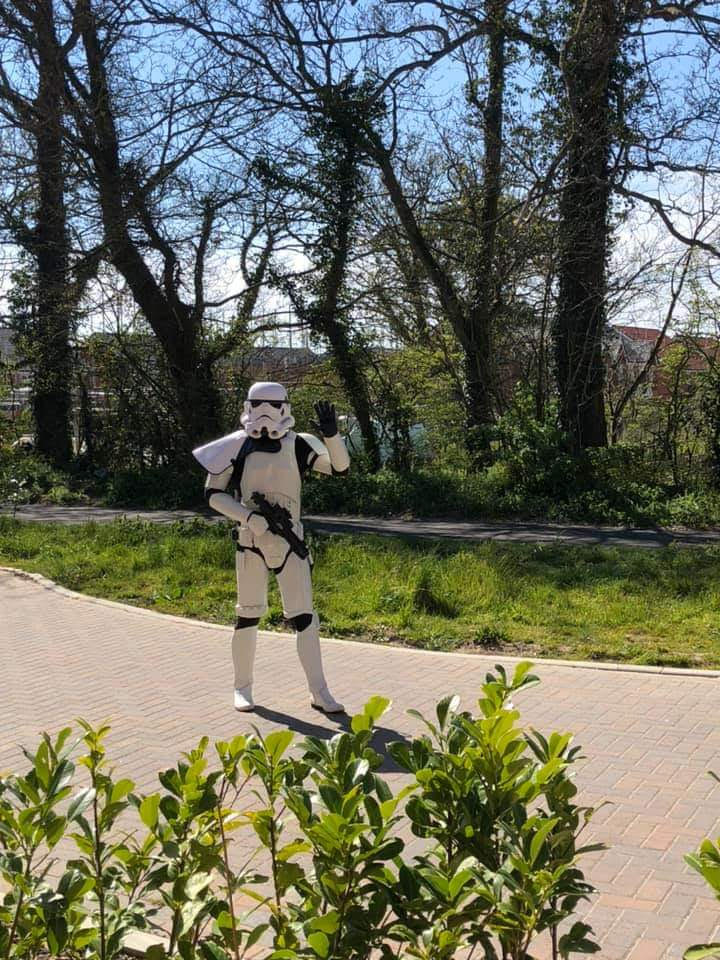 As we all know, we must only leave our homes if we are key workers or cannot work from home, to do essential shopping and for one period of daily exercise.

By doing this we will all help protect the NHS and save lives.

Despite the absolutely necessary restrictions on our normal lives, people are being encouraged to help neighbours in need where possible. This has led to some amazing acts of kindness on every street, in every village and town across the UK. Communities have never felt stronger. Today, we shine a light on just some of the people from communities across the UK to showcase examples of ordinary people doing extraordinarily kind and helpful things.

A CHARITY that supports families has noticed a sharp rise in requests for help due to widespread redundancies.

Gail Redmond of 'Via Wings’ in the County Down town of Dromore, in Northern Ireland, says the charity normally gives out 85 food bags a month to people in need.

“But last week we gave out 105 already, many of which are going to people who are self-isolating,” she said.

“One guy who contacted me on Friday, said: I have never asked anyone for help like this before. But I have lost my job and can’t afford to feed my kids right now.’ You could tell that he was absolutely mortified and so humble. So many people have lost their jobs.

“We have told pensioners not to answer their door when we deliver, but one old lady insisted. We told her she shouldn’t be doing that, but she replied: I just want to say thank you’.

“The older generation are so apologetic when asking for help, they all say: I’m sorry to bother you’.”

Christian charity Via Wings is offering food deliveries and befriending to anyone who is self-isolating, elderly, vulnerable, an NHS employee, key workers, or those financially impacted by Covid-19.

Volunteers observe social distancing guidelines and food is carefully wiped down before being packed. Food and toiletry donations can be made at Eurospar, Supervalu and Vivo in Dromore and Tescos (Boulevard) and Lidl in Banbridge.

Via Wings works with local schools and churches, social workers, care workers and other agencies.

“Working in unity is what our grandparents used to do, and that is what we need to get back to doing, caring for each other,” Gail added.

“There is no ownership, we are just working together.”

AN ULTRA-MARATHON runner is putting his best foot forward after several running events planned for this year had to be cancelled or postponed.

Last year Neil Musgrove ran seven ultra-marathons and with none looking likely for this year he is running one in his back garden.

He is doing a mile a day in his back garden according to his running watch and is hoping to reach his goal of the 30 mile starting distance for an ultra marathon by the end of April.

He said: “With no ultra-marathons to run I thought I’ll run one of my own. Any experience I’ve had with Leeds Hospitals in the past has been positive, I want to support all of our amazing NHS staff who are currently under huge pressure and working in extremely tough circumstances.

“It is quite a few laps. All being well this takes me to a 30 mile ultra marathon distance. Yes it might get a little tedious but I am thinking of it as an ultra with a checkpoint, food and drink at every mile.

“My young niece and nephew have already got involved and I’m hoping to get my own kids involved too. I’m sharing the challenge with my colleagues and running club team-mates so hopefully lots of us will get involved. Make it as interesting as you like. I am thinking about obstacles, singing, dancing, whatever. I would love it if people joined in. The only rules are it has to be a minimum of one mile. It has to be fully within your own property boundary. If you don’t have a garden, special dispensation is given to use your street but remember the two metre rule.”

This includes, paying for care packages, assistance with travel and accommodation where needed, as well as helping to fund other health and wellbeing initiatives to boost morale across the wards. He set a target of £750 on his JustGiving page and has raised more than £550 already.

Leeds Cares is the official charity partner of Leeds Teaching Hospitals. The organisation supports NHS staff to deliver the best care for patients and their families, by raising funds for equipment, services, education and research.

A FOOTBALL club initiative is supporting hundreds of families by delivering school meals to pupils during the coronavirus lockdown.

With the season shut down indefinitely, Stenhousemuir FC set up its community help hotline in mid-March to assist the most vulnerable members of society as the effects of the global pandemic began to take hold.

A 30-strong squad of volunteers was assembled in the first week to carry out everyday tasks like shopping or dog walking for those in isolation or for whom such activities would prove difficult. Since then, the number of volunteers has hit 80 although extra help remains welcome.

Government guidelines mean the volunteers can leave their homes to help a vulnerable person and, with almost every volunteer already assigned to an individual, more support is likely to be needed in the weeks ahead.

The idea has been well received by those who live in the Stenhousemuir and Larbert areas and beyond, so much so organisers opted to branch out and ease the strain on mums and dads by collecting and distributing school lunches purchased by Larbert High School to youngsters stuck at home.

Pupils from Larbert High and its cluster primaries are benefitting from the move.

On just one day last month, volunteers delivered more than 130 meals to schoolchildren.

Stenny chairman Iain McMenemy, who helped to organise the initiative, said: “We put out a few requests for further volunteers and the response to each has been really encouraging.

“We’re doing one-to-one tasks for people like dog walking and shopping and we’re putting in calls to make sure they’re okay.

“We have even had members of family from farther afield saying they have a relative in the area and they want to give you a call.

“We’re still looking for volunteers as we’re only in week three and the smart money is probably on this being extended for three months. We’ve also expanded out to do school meal deliveries for a number of the schools. Carron Bathrooms got in touch and offered two vans so we now have three. On top of that, we’re doing deliveries for Falkirk Foodbank.”

Though Stenny officials admitted concerns over the impact COVID-19 would have on the club itself, their focus has always been on the “health and well-being” of the community.

When the community help initiative was first announced, Mr McMenemy wrote in a statement: “With the continuing spread of the coronavirus, Scottish football faces an uncertain future.

“It is quite clear that there will be a significant impact on football operations and finances and Stenhousemuir Football Club will no doubt be affected by this.

“However, there are other, more important matters to think about. The coronavirus is a very serious disease that will affect thousands within our communities.

“The health and well-being of friends, neighbours and members of our community should be our top priority.”

A BOY with spina bifida and his father are both doing their bit for the community - but in completely different ways.

Harry Ragless usually spends 80 per cent of his time in a wheelchair due to his condition, which means his spine did not form properly in the womb and he has neurological damage to his legs and back and cannot feel his feet.

But inspired by the efforts of 100-year-old war veteran Captain Tom Moore, which have seen him raise around £30million for the NHS, Harry decided to raise money by walking with his frame and leg supports.

The determined six-year-old from Oaksheath Gardens in Durrington, near Worthing, has raised £2,400 and rising within days of his parents launching a fundraising page for his efforts - smashing his £100 target.

He said: “I feel really good. I was shocked.”

His proud mother Selina Ragless said: “He has shocked us all. Because of his condition he tires easily but the other day he walked from our house to Vancouver Road, which is really far for him. We couldn’t believe it.”

As word of his exploits spread, Selina said people were coming out of their homes to applaud Harry, who attends West Park School in Marlborough Road, Goring, when he went out for a walk.

She said: “I feel overwhelmed to be honest. We owe the NHS so much; they have been there for him since he was born and will be there for him for the rest of his life. If we can give something back, that is all we want.”

In fact, Harry’s exploits grabbed the attention of Captain Tom himself - and his picture was featured on the Second World War veteran’s Instagram page.

Harry is not the only person in his family who is raising a smile in the community.

By day, his dad Steve is a warehouse manager - but during his daily walk, he dons his Stars Wars outfit to bring a bit of fun to the neighbourhood. The 45-year-old said: “I love it. From my own experience, I remember the first Comic-Con I went to in Birmingham and I saw all these stormtroopers standing outside, and I went into full fanboy mode.”

The opportunity for him to get his own suit arose when a friend was selling theirs.

He said: “When I finally put it on, I just felt amazing in it. I love seeing the looks and smiles, and people tooting their car horns and waving. It brings a few smiles in these very strange times.”

Selina came up with the idea for him to wear it after they were put in lockdown, and during their walks around the estate Steve has posed for ‘socially-distant’ photos with some of the children who have come out to see him.

In his spare time, Steve has donned the costume to a variety of events, including birthday parties, weddings and charity events.

When the Connaught Cinema has done showings of Star Wars films, Steve has turned up in his gear to raise money for Sussex Association for Spina Bifida and Hydrocephalus, a charity which has helped Harry.

When asked if there was anything he wanted to say to the people who have donated so far to his campaign, Harry said: “Thank you.”

Do YOU know a volunteer who deserves to be recognised for making a change in their community?

The Prime Minister recognises one person a day with a Point of Light award.