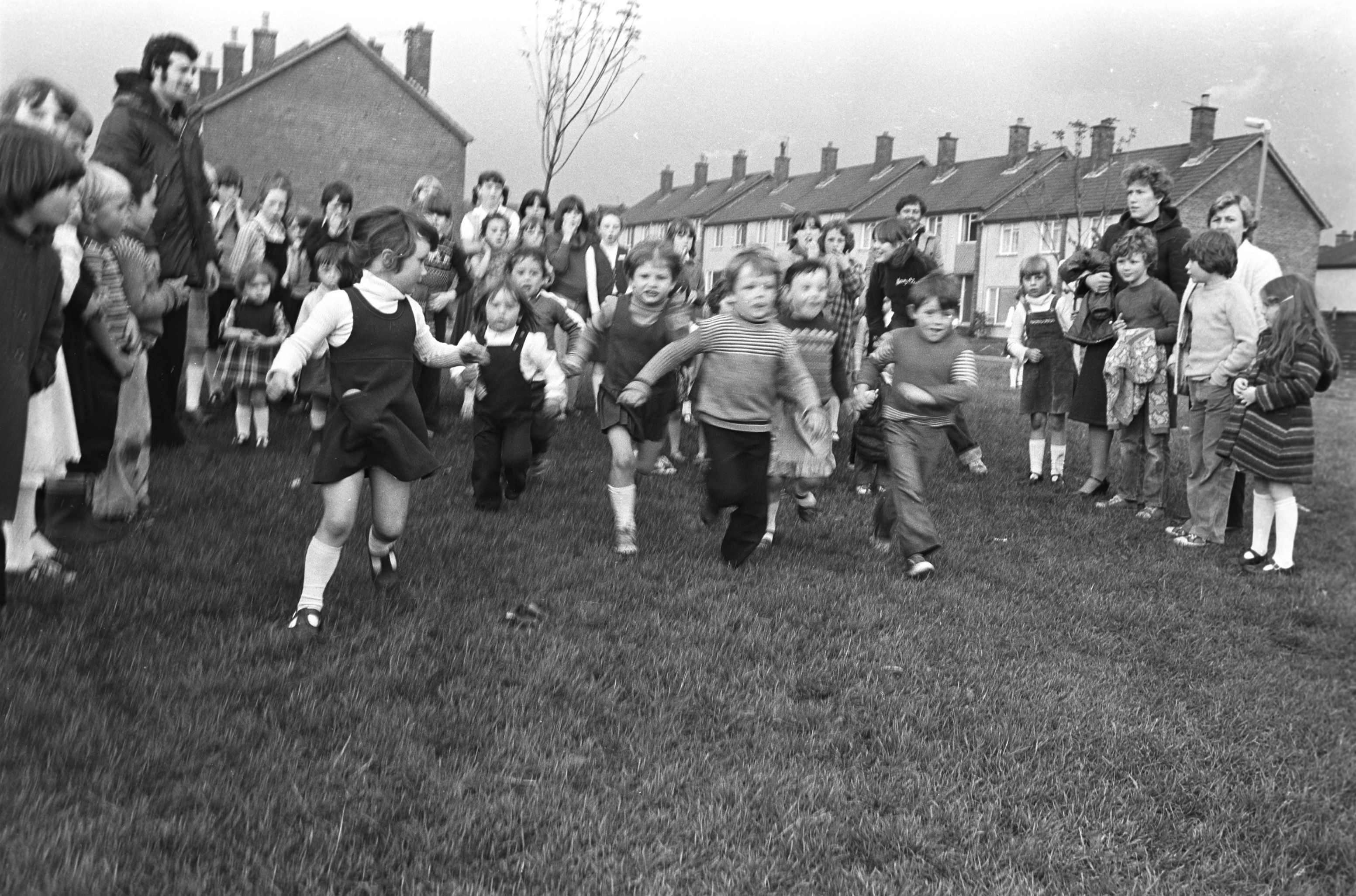 Infant races at the Lenadoon Festival back in June 1980

Miriam Daly Champion of the underprivileged

Miriam Daly was a senior lecturer in Queen’s University – an academic. In all our experience academics aren’t like Miriam Daly. They tend to ignore what goes on and to remain aloof from ‘ordinary’ people. They view the situation on another, a ‘higher’ plane. Things may be discussed, analysed, categorised – but they don’t really concern us.

Miriam Daly wasn’t like that. She cared. By her activities for civil rights, prisoners’ rights and human rights in general, she attracted attention. And her dedication to her professional duties left her with no protection at all. Only her great personal courage could have allowed her to pursue her objectives in every direction.

Death at the hands of British assassin was the price she paid for her honesty and conviction.

Maybe this isn’t the time or the place to issue a warning about the dangers to people involved in the business of fighting for justice, on all fronts. But it’s obvious that British agents, of all shades, have drawn up an assassination list. Anyone engaged in any way in anti-British activities is in danger. There is no doubt about that!

Any home raid, street search and screening, or seemingly innocent canvass by RUC or British Army, must be seen as what it is – a collection of information which can easily be placed in the assassin’s hands.

RUC, British Army raids searches and checks must be recorded meticulously and the records given to a solicitor – and the information that this is to be done, intimated to the RUC, British Army etc personnel involved.

Remember: All British ‘security’ personnel operate in each other’s company. The man or woman you see on the street supplies the information for the assassination squads.

Attention to detail on our side can help to curtail the activities of the British assassination squads, who are ever-active in our areas.

MARTIN Meehan is now in this 46th day of hunger strike. In his protest for justice he has the support of his family who are only too aware of the fact that Martin Meehan was framed.

In their attempt to highlight and support their father, his wife and five children protested outside the Appeal Court, Chichester Street, on Monday 30 June 1980 – the last day of the Appeal Court hearings until September – in order to ‘remind’ the so-called ‘Justice System’ in ‘Northern’ Ireland, that while they are all away vacationing, they murder Martin Meehan.

Kevin (14), Martin (12), Mary (11), Jacqueline (10) and Bronagh Martine (1), all paraded for one hour outside the court, even the baby had a protest notice. It brings to mind, and it is a very sad fact in Northern Ireland, that in order to cry for justice and truth, this man feels it necessary to hunger strike for justice and his family to parade the courts in order to highlight it.

We would like to remind Martin’s supporters that there will be further protests in order to support his fight, and we ask that you show your support and solidarity. By supporting us you support Martin’s fight for truth.

Martin has now lost 43/44 lbs in weight, is suffering severe pain all over his body – loss of concentration, hearing and eyesight defective, very, very weak. He still forces himself to see his wife daily on the appeal visits, and if on these occasions she speaks outside the appeal or trial, they throw her out. He asks for support from his friends, he asks that you show solidarity to his fight for justice.

Break-ins on the Whiterock

Shopkeepers in the Whiterock Road/Rock Street area off the Falls say that they are being persecuted by a gang of thieves operating at night.

They say that the raiders are mostly adults, using young children, who enter premises through narrow spaces and then let the ‘heavies’ in. One man to whom our reporter spoke, said that they could get no help from the RUC, some of whom actually laughed at them.

He said that some business people were considering taking effective defensive measures to protect their property.

On Monday night of this week, Maureen Hoey’s fashion shop was broken into between 1.30 and 2.00 am. The raiders took all the new stock which had just been displayed that day. This is simply the latest in a series of burglaries.

“About every six weeks they come,” said Mrs Hoey. “We already had to close our Whiterock Road shop because of them, especially when we were cleared out at Christmas.

She is convinced that the robberies are the work of local men and boys.

In April two windows of the shop were smashed at about 2.00am on Sunday 18th. Maureen lives near the shop and on hearing the noise she and her husband drove straight there. But she had to return within five minutes to obtain a key, and discovered her house being burgled.

She saw one man disappearing up the stairs, and one of the raiders shouted, “the bastards are back” as he threw a heavy money box (empty) at Mr Hoey. One of the raiders had a gun on this occasion.

According to one man, some of the younger thieves have been apprehended and charged by the RUC but left off with suspended sentences by judges who recognise no crimes except ‘terrorist’ crimes. These young people return almost immediately to burglary and thieving.

“We’re not taking any more,” he said. “We know some of these people, and something will be done to sort them out once and for all.” 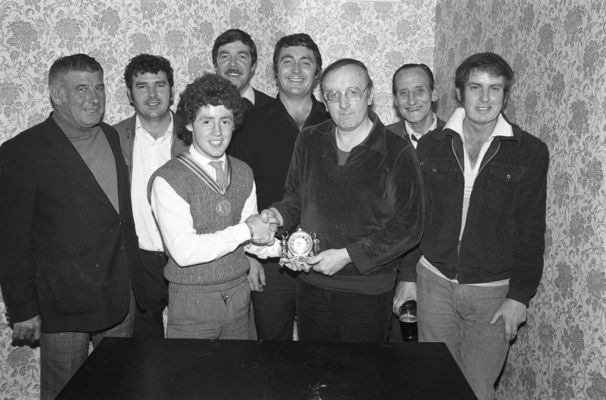 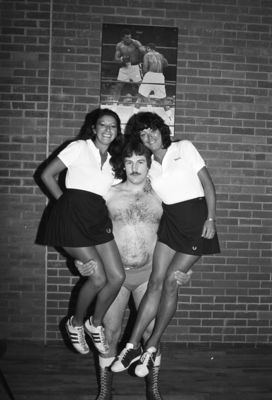 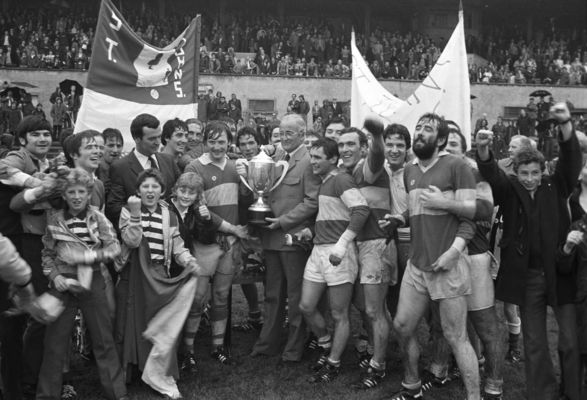