EYE ON THE PAST: – October '81: Sectarian murder campaign against Ardoyne residents 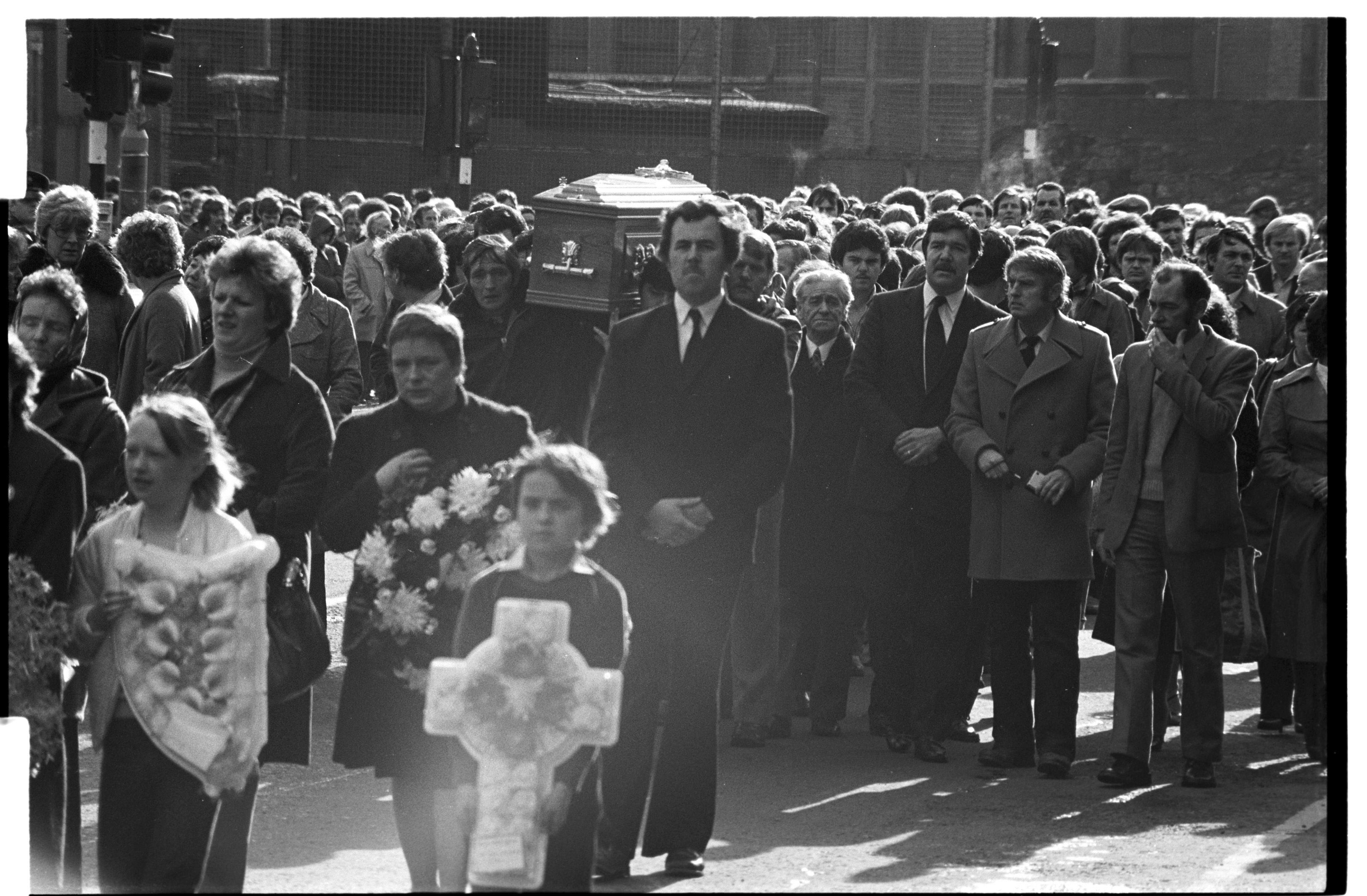 FINAL JOURNEY: The funeral of Councillor Larry Kennedy, who was murdered leaving the Shamrock Club in Ardoyne

THE sectarian murder campaign against Ardoyne Catholics which has gone on unabated for more than a year, has claimed its latest victims with the killing of Mr Robert Ewing of Deerpark Road.

34-year-old father-of-three Mr Ewing, was shot dead in his home on Monday evening while watching television, and following closely the killing of Councillor Larry Kennedy in the Shamrock Club the previous Thursday.

These are only the latest killings in a concerted sectarian murder campaign aimed at ordinary Catholics in Ardoyne, which has left six people dead, and more than a dozen injured. Random indescriminate attacks have taken place all around the perimeter of the Catholic enclave, on Deerpark Road, Alliance Avenue, Flax Street, Crumlin Road, Wheatfield and Mountainview.

People in Ardoyne point out that none of those killed or injured had any connection with republican military or political groups, and proves the indiscriminate anti-Catholic nature of the UFF assassins who have claimed most of the attacks.

People in Ardoyne told our reporter of their frustration and anger at the continued use of the tit-for-tit cliché by unionist politicians, Protestant clergymen and the mass media to describe these killings.

“I believe,” said one angry victim, “that this is an attempt to give these killings legitimacy and equate them with the killing of members of the ‘security forces’. If these Protestant assassins were killing IRA men or other republican militants one could understand the tit-for-tat claim, but this is not the case and they should be known for what they are – part and parcel of a deliberate anti-Catholic pogrom in this area."

A woman who had lost her husband in a sectarian attack told our reporter that the North Belfast area had borne the brunt of the loyalist assassination campaign from 1969 onwards, and hundreds of innocent Catholics had been murdered, some of them in the most horrific manner.

“What always amazes me,” she said, “is the attitude adopted by our own politicians and clergy to these killings. You would think that our lot in life was to be fatted for the kill, and that we should accept our lot and not say a word about it. There is a vicious anti-Catholic murder campaign underway in the Ardoyne area, and it is about time our clergy came out and said so, no matter who it offends.”

BELFAST Councillor Larry Kennedy was murdered by the UFF last Thursday night, as he was leaving a fundraising function in the Shamrock Club in Ardoyne.

It is hardly likely that he was killed because he was a councillor or because he assisted in the H-Block campaign. The UFF are not noted for their discriminate picking of victims. To be a Catholic is enough, and it is both tragic and ironic that a person who would have attested to his belief in a non sectarian society should be gunned down in a sectarian attack.

Larry Kennedy used this newspaper often over these past couple of years. First of all in his charity work for Cancer Research and handicapped children, and since his election as a community councillor, in his efforts to raise the standard of life for the people of Ardoyne.

We were glad to assist him, because we recognised in him a person who was genuinely interested in the problems of his neighbours and the social and institutional pressures placed upon them.

He worked unobtrusively to eleviate the environmental problems of the area, caused by years of authority neglect.

He brought out people and youngsters to Andersonstown Leisure Centre by bus, to highlight the lack of facilities in his own area. Had he lived, we have no doubt that he would have achieved much in Ardoyne while working as a true community councillor, relieved of the restraints and deflections of political party manoeuvres.

In this appreciation, we have tried to show what Councillor Larry Kennedy meant to the people of Ardoyne, but to his murderers he was just another ‘Mick’ to be eliminated as soon as possible.

IN recent months there has been a large increase of television aerials sprouting up all over Belfast. There is also a growth industry in erecting these aerials for RTÉ 1 and RTÉ 2.

RTÉ have recently installed a UHF TV main transmitter at Clermont Carn which overlooks Carlingford Lough, about six miles from Dundalk. This new high power transmitter will provide the two channel colour service to an estimated 180,000 viewers in counties Louth, Meath, Monaghan, and Dublin. It will also service the counties of Armagh, Down and parts of Antrim, but to the latter counties it will be restricted by a screen. The power out at the moment is 10KW.

Due to EEC regulations the maximum transmitting power allowed is 20 KW across political borders. So, the 26 County government has followed the regulations according to the book. They have only been transmitting at 10KWs and are expected to raise this to 14 KWs soon. The shield which prevents full power from going North has been in place since the transmitter was erected.

Some areas in West Belfast have better reception than others, and one aerial erector assures us that areas like Lenadoon, Stewartstown, Hillhead, Dermott Hill, Ballymurphy, New Barnsley and high ground in Ardoyne are suitable areas.

If you want an aerial consult the columns of the Andersonstown News and the erector will advise you if reception will be good enough in your area.