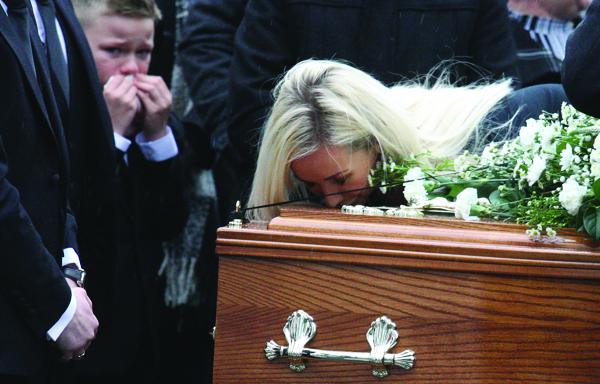 THE family of Jim ‘JD’ Donegan have called for “no retaliation, only justice” as the Requiem Mass of the murdered 43-year-old took place in St John’s Church on the Falls Road this morning.
Mr Donegan was shot and killed as he waited to pick up his son from St Mary’s Grammar School on the Glen Road on Tuesday December 4.
Police are continuing to hunt the lone gunman, believed to be in his 40s, who was wearing a hi-vis jacket with the word ‘security’ on the back. He is believed to have made off on the foot towards Clonelly Avenue.
Personal items belonging to Mr Donegan, a former pupil of Corpus Christi College, including car keys and sunglasses were brought to the altar by his family as well as a framed wedding photograph.
During his Homily Parish Priest Fr Martin Magill spoke of how Mr Donegan’s family were “plunged into the depths of grief by his murder”.
“They have known and know the anguish wrought upon them by the individual who killed Jim. Yet in the depths of their pain they are very clear – they want no-one else to suffer as they have suffered and are suffering and will continue to suffer.”
Fr Magill continued: “In focussing on your pain which is first and foremost the brutal and callous way in which Jim was murdered, that pain was also added to in other ways – the fact that within a very short time of his murder photos of JD’s car were already circulating in social media. Some members of his family became aware of Jim's death through social media instead of hearing it directly from other members of the family or close friends.
“In addition to this there was also the speculation and allegations made in some papers which also added to the family pain – I know that Jim’s wife Laura has spoken out clearly to deny what was written.”
Fr Magill addressed the mourners stating how “no-one is entitled or authorised to take away the most basic right of all from a human being – the right to life”.
“That right was violated by an individual last Tuesday afternoon.”
“Jim Donegan went to collect his son from school, an ordinary and everyday event in the lives of so many parents. His murder in any circumstances was wrong but even more so in the presence of children who were nearby and witnessed the traumatic scene, one that will stay with them for the rest of their lives.”
Fr Magill said that from speaking with Jim’s family that they had found great comfort “and deeply appreciated the compassion and sensitivity from those on the scene – the members of the public who stopped to help, teachers from St Mary’s and CBS as well as the paramedics”.
“Then there were the young people, the pupils of St Mary’s, the friends of Jim’s son who kept him away from the scene of his father’s murder. I commend their quick thinking and sensitivity.
“These acts of human goodness give us hope and my prayer is that God will touch other hearts to reach out to you as a family at this time.”

Mr Donegan’s Requeim Mass was followed by a service at Roselawn Crematorium.