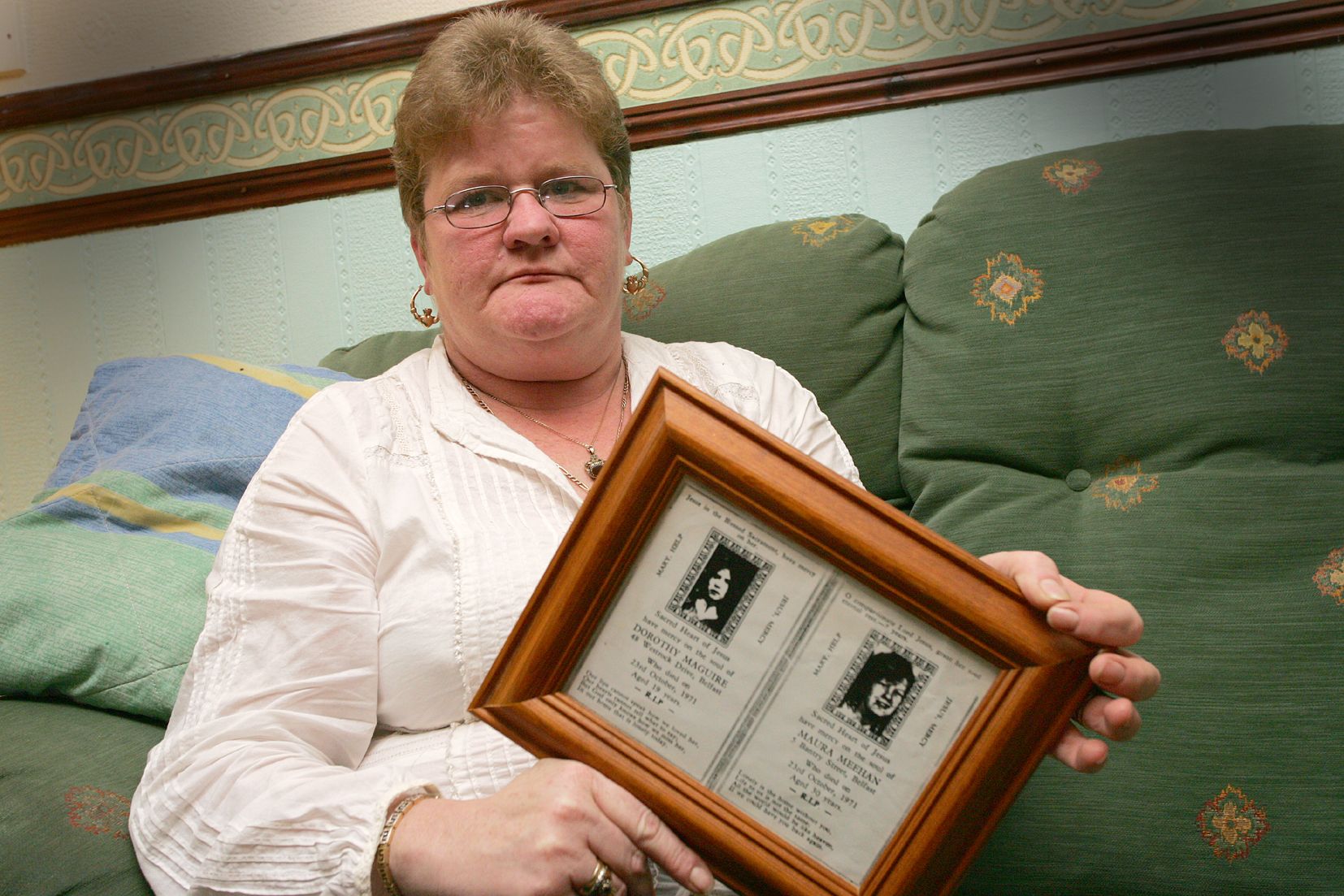 JUSTICE: Margaret Kennedy whose Mother Maura Meehan and Aunt Dorothy Maguire were shot dead by the British Army in Cape St in the Lower Falls on 23 October 1971. Picture by Sean O'Reilly

THE family of two Cumman na mBan members shot dead by the British Army in 1971 are to launch legal action against the Attorney General after a new inquest into the killings was refused.

Mother-of-four Maura Meehan died with her sister Dorothy Maguire when soldiers opened fire on a car in which they were passengers in Cape Street in the Lower Falls area on  October 23rd  1971.

The British Army claimed a gun had been pointed from the back of the car – a claim that has been disputed by eyewitnesses and the women’s family.

Forensic reports from the time claimed Ms Meehan had lead on both hands “consistent with discharge residues due to firing a weapon”. However, a report compiled by Relatives for Justice casts serious doubt on these claims.

On hearing the shooting residents gathered at the junction of Cape Street and Ross Street junction only to be also fired on by soldiers using rubber bullets. A rubber bullet was also retrieved from the car, having been fired into it afterwards. It is believed that charge to fire the rubber bullet would have contributed towards lead residue within the car.

The forensic tests were carried out BY a member of the RUC on October 23rd and not presented until the 25th.

Earlier this year former Attorney General John Larkin refused the family’s request to order a new inquest into the killings.

On the 23,October ,1971
Just before dawn, Maura Meehan, 30, and her sister dorothy maguire,19,had tried to warn neighbours of the incursursion and military raid by British army regiments,namely,the royal greenjackets were murdered pic.twitter.com/Tna1eGBrsq

In a statement, released through Relatives for Justice, Ms Kennedy said: “My mother was brutally shot dead alongside her young sister, my aunt. They both were backseat passengers in a car that was ambushed by British soldiers. Two others, front seat passenger and driver, were also shot but thankfully survived. For us this was a clear case of summary execution in which there was never effective investigation. Lies from soldiers were casually accepted without scrutiny despite the overwhelming forensic and ballistic evidence and eyewitness accounts contradicting the accepted version; namely that my mother and aunt were armed and had fired shots at soldiers. I was nine years old at the time and in many regards I’m still in that place and time of October 23 1971 largely in part because of the injustice following the appalling killing of two young Republican women. Our struggle for accountability will never cease for both the killings and of how we’ve been denied justice. Had the authorities delivered justice instead of engaging in a coverup then things may have been different in that the conflict might not have escalated. In reality the killings and subsequent inaction fuelled and sustained the conflict. In this regard the legal challenge I’ve embarked upon will continue until we get justice. I want to thank Relatives for Justice and KRW Law for all the support they’ve provided to our family."

Annmarie Maguire, the niece of both victims, said: “Obviously a fresh inquest would provide the best way forward in addressing the killings and the State misinformation that persists to this day.

“A new inquest could examine thoroughly all the evidence including compelling all those responsible to attend court and be cross-examined.

“Setting the record straight, having historical clarification, justice and accountability is our main priority.”