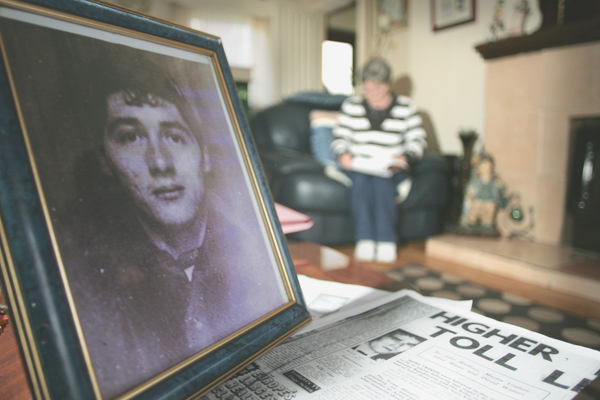 CAMPAIGN VICTORY: Theresa in her Ardoyne home where a picture of Joseph takes pride of place

THE sister of an Ardoyne man shot dead by the British army in 1971 says there’s “relief” in the family after a coroner ruled the shooting was “not justified”.
Joseph Parker (25) was attending a Christmas dance at Toby’s Hall in Ardoyne when he was fatally shot. He suffered injuries to both thighs and died in hospital two days later.
Coroner Joseph McCrisken ruled that the soldier who fired the fatal shot had not aimed at any individuals deliberately but had acted recklessly by firing into a crowd at close range.
“I am satisifed that this shot was fired deliberately but that Mr Parker was not deliberately targeted; in other words, this soldier was acting recklessly when he fired shots at such a low level in a hall full of civilians,” said Mr McCrisken.
“I have not been presented with any evidence which suggests that Mr Parker posed any threat, either direct or indirect, to the military patrol.
“I am satisfied, therefore, that the force used against Joseph Parker was not justified since he posed no threat to members of the patrol.”
Speaking from her Ardoyne home this week, Joseph’s sister, Theresa Watt, said the family is relieved the case is now over.
It’s the second ‘closure’ for Theresa within the space of months. In May, a coroner also delivered an “unjustified killing” verdict in relation to a separate incident in which Theresa’s husband, Barney Watt, was fatally shot by British soldiers in February 1971. He was subsequently and wrongly accused of carrying an explosive device.
“I’m glad it is all sorted out, I can end my grieving now for my brother,” she told the North Belfast News.
“I want to thank everyone who came forward to give evidence earlier this year. There were a lot of people there that night.
“The closure of the case will help his two daughters, Joanne and Charlene, move on. I’m glad the right story finally came out.
“I’ve got the two incidents sorted out now. There is nothing more I can do.”
An 1972 inquest into Joseph Parker’s death recorded an open verdict. A fresh inquest was ordered into the killing in 2009 after an investigation by the Historical Enquiries Team.
A number of witnesses to the shooting are understood to have brought themselves forward to a ‘witness surgery’ in September of this year.
Sinn Féin MLA Gerry Kelly welcomed the verdict.
“The coroner ruled that Joseph Parker – a young father with an expectant wife – was a totally innocent man killed by the deliberate and reckless actions of the British army,” said Mr Kelly.
“The ruling is a complete vindication for his family who have campaigned for so long to see this day.
“They should not have had to wait almost 50 years for the truth to come out. They, and many other families in a similar position, are being re-traumatised by a British government which is still blocking the implementation of agreed legacy mechanisms and withholding funds for legacy inquests.”
Lawyer Pádraig Ó Muirigh said the Parker family are now considering whether to bring a civil case against the Ministry of Defence in light of the inquest findings.