FEATURE: A Road Runs Through It - The Bog Meadow Lakes explored in new book 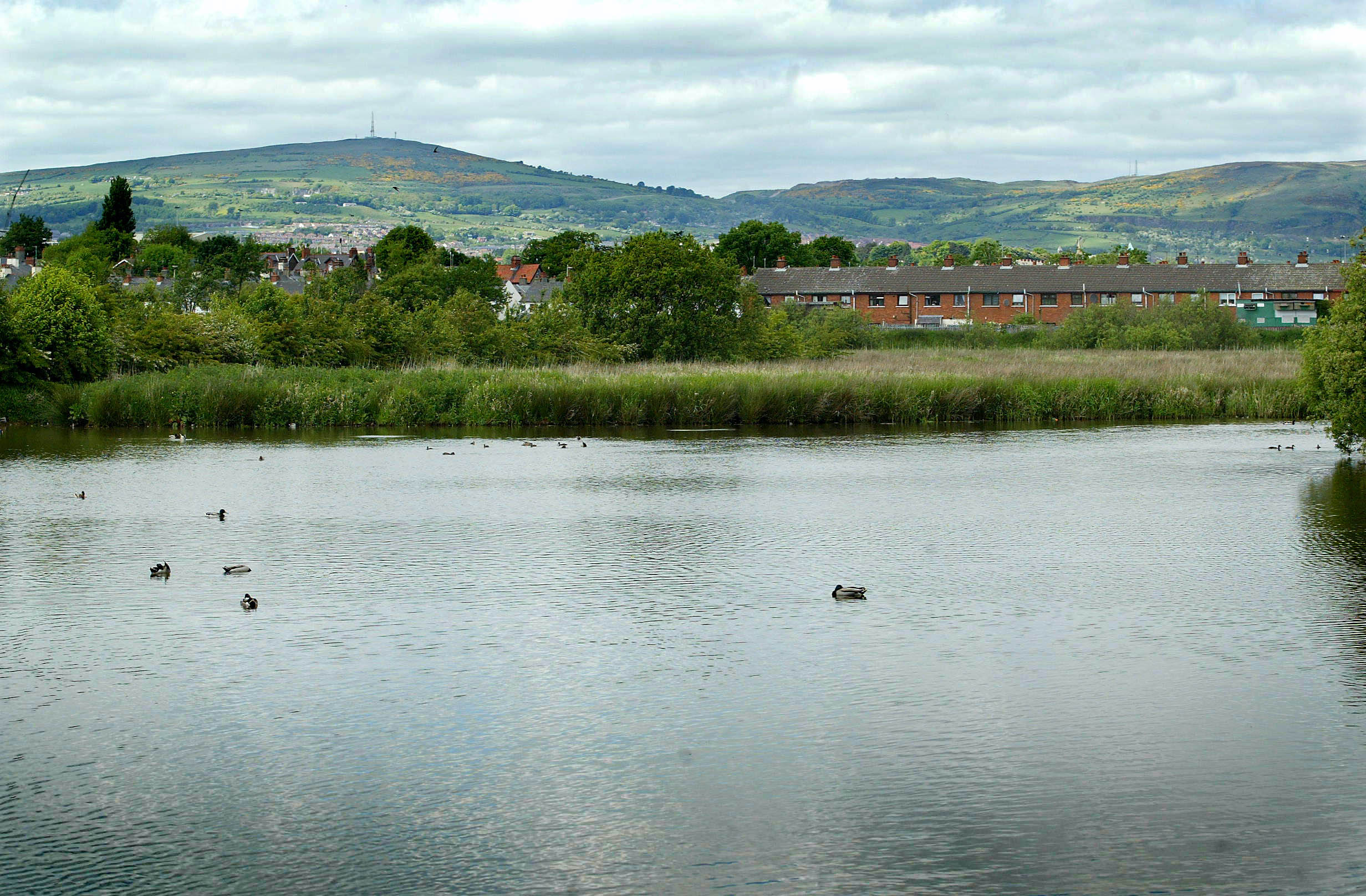 We publish here an excerpt from ‘A Road Runs Through It: The Bog Meadows of Belfast’, a proposed new book by David Branagh of Co Wicklow. David is keen to find a publisher for his work and can be contacted via our offices.

There were four main lakes and three ponds or pools in this bed of the River Blackstaff which when in very heavy spate would combine as one. I name the four lakes for the purpose of note taking the survey as Andersonstown, Milltown, Windsor and Adelaide. All the lakes were completely surrounded by deep water vegetation such as branched bur-reed, reedmace, marsh marigold etc and where this occurred it was considered part of the lake area. As the vegetation surrounding the lakes retreated and “died back” in the winter months and with additional rainfall there was more expanse of “open water”. So in affect there were two forces in play that controlled the extent of open water and marsh area. Winter die back of reed and rush vegetation combined with more precipitation enlarged the lakes and open water while at the same time decreasing the marsh area and the complete reverse of conditions in summer increased the marshes while, seemingly decreasing the lakes and open water areas. As the lakes greatly depended on precipitation on average the water area more than doubled summer to winter. The marsh areas commenced when rush and sedges began to dominate and became more prevalent. A small pond also existed at Stockman’s Lane as part of Balmoral Marsh which I named Stockman’s Pond, not far away in the same location where was what appeared to be filter beds with some sort of piping system. I was never able to ascertain what function these had and why. Two more small ponds or open stretches of water existed near to St Katherine’s Road which I name Clonard Pools. During the survey years (1958-1962) water levels were more or less consistent, summer virus, winter with the exclusion of the year 1959 which proved to be an exceptionally dry summer. That year the lakes receded greatly so much so that Adelaide Lake was an entire mudflat at what was a large part of Andersonstown lake, (particularly around the shallow edges). These drought conditions made is easier for me to traverse the marshes as they held little water making my search for nests that much easier. It is also important to note that all of the lakes were not firm underfoot but some were quite treacherous with a very soft underlay of silt and sludge. So accordingly it was the state of spate in the Bog Meadows that controlled its topography and the figures quoted are an approximation, and based on summer versus winter averages excluding major floods.

By far the largest of the four lakes was formerly name Whooper Lake, so-called because of that species preference when visiting. This lake was adjacent to Andersonstown Meadow and was the central lake situation to the west to the Blackstaff river. As with all the lakes this lake varied considerably in area summer to winter though this lake had more scope and could more than double in size during winter months. The lake edges when in contraction during the summer months (particularly at the southern and south west margins) consisted of a partial fresh water mudflat interspersed with some rush which offered good feeding for wading birds species and water rails. Andersonstown Lake was also the deepest of the lakes but only towards the middle, when and during some summer months it could be up to three feet in depth, considerably more in winter. However the margins to the east though shallow were thick with reed mace and branched bur-reed and many other species of aquatic plants and therefore ideal for nesting and feeding wildfowl. So it could be explained as a saucer-like lake. To the north of the lake, a slight ridge of higher ground, thickly covered with rush separated it from the southern part of Milltown lake. The eastern shore of the lake was surrounded by branched bur-reed with mostly rush to the south and west. The lake contained three islands, the largest I name Gull Island, and was the equivalent in area of the other two combined. The total area of the islands combined were approx 0.8 of an acre. This lake was favoured by all three swan species and a wide variety of wildfowl including diving ducks.


Formerly named Shoveler Lake. This lake was the second largest and the most northerly of the lakes and as the name suggests with situation near Milltown and west of the Blackstaff River. The lake had an overall extended shallow base (about two feet) with a deeper western edge. It could be perhaps explained as more like a side dish with a gravy well, to the left (western part). It was surrounded by mostly reedmace (bulrush as it was known by locals) and some branched bur-reed and with a splattering of marsh marigold to the northern, eastern and southern sections. The northern section of the lake was along with the area surrounding Windsor Lake and Windsor Drain to the east. This was the most favoured lake for Shoveler and Little Grebe.

An oasis in the heart of the city.
The Bog Meadows
West Belfast. pic.twitter.com/EE6oaYLKhr


The most southerly of the four lakes and the most variable in area winter to summer and the shallowest lake. Formerly known as Wader Lake because of its attraction to wading birds this lake was dramatically different from all the other lakes in that it would almost dry out during hot dry summers and this particular topography could and would linger into autumn. Its middle basin at that time was usually made up of wet mud in dry summers interspersed with rush and until the 1961 flood was gradually becoming an extended marsh. After autumnal rains shallow pools would appear at the edges, an ideal habitat for wading birds particularly when this coincided with autumn migration. Consequently this was the lake that turned up the majority of unusual species as it acted like a magnet for migratory waders when conditions were right. After the 1961 floods further deposits of mud and silt was piled up in this lake extending its life for a few seasons and prior to further building in the years to come. During winter months the lakes tended to expand but was always in a state of flux and had not development taken place would have mostly certainly become an extended marsh.


The only lake lying east of the Blackstaff River and south of Windsor Drain. This lake had no shallow edges but virtually within a few feet of walking it steeply dropped to three or four feet; in essence it resembled a bowl. It was completely surrounded with reedmace and branched bur-reed with thick rush and was the favoured haunt of diving duck and during the early 1950’s a gull roost in winter probably because of the close proximity to the then in use Adelaide refuse/landfill site. This was still operational to about the mid-1950’s but closed probably due to the impending build of the M1 motorway. This lake area was the most difficult to census due to it being extremely treacherous under foot, with yielding floating vegetation extending from the marsh. Furthermore with soft deep mud and silt underfoot on its approach these conditions could be likened to quicksand due to is power of suction. Consequentially it was well protected with the deep Windsor Drain to the north, Blackstaff River to the west and allotment lands, the Great Northern Railway marshalling and repair yard to the east and most of the south end. This left a thin neck of hazardous marsh to the south from which to approach the lake.