Féile Fight Night: Conlan can settle the argument against Doheny 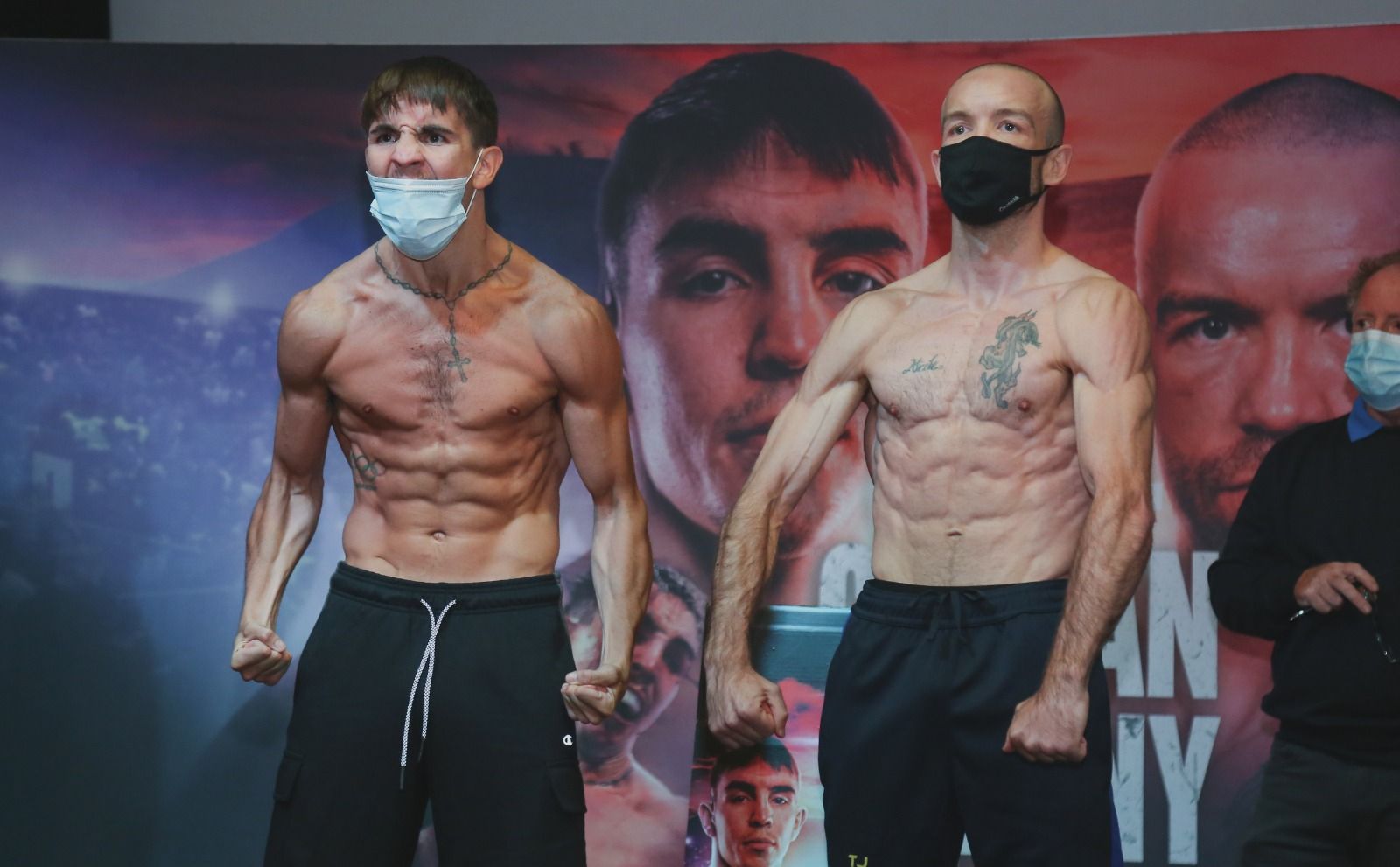 THERE have been disputes all week centring on the weight limit for tonight's Falls Park showdown between Michael Conlan and TJ Doheny, but at around 10.30pm (live on Fite TV), the pair will settle their differences in a fight that has captured the imagination of Irish fight fans.

The chain of events seemed to begin on Monday with the WBA announcing their interim featherweight (126lb) title would be on the line and this confirmed the fight would not take place at the expected super-bantamweight limit of 122lbs.

Doheny was furious at Tuesday's press conference, not only at the catchweight limit of 124lbs, but that the fight is to be contested over 12 rounds and not 10 as he had believed.

The fiery exchanges have done the build-up absolutely no harm, but the Portlaoise man's mood was not improved yesterday as Conlan weighed in at 124.2lbs to his 123.8, yet with the issues resolved backstage, the fight is on and both men will walk out in front of a packed house confident of victory.

The extra weight may seem trivial to some, but it could make all the difference on the night as Doheny will be fighting outside of his usual division and this hands an advantage to Conlan who seemed equally fired up at yesterday's weigh-in at The Devenish.

💥 UPDATED Running Order for this evening

▪️Live on FITE TV and ESPN +

🥊See you all tonight for the biggest fight in Irish History#ConlanDoheny pic.twitter.com/YKLkhiunUd

It's not just the title at stake that will see the victor likely step into a bonafide world title shot next, but also Irish bragging rights in a fight between two men who have reached the top as either as professional (Doheny) or an amateur (Conlan).

Conlan will walk to the ring with a perfect record of 15 wins from as many contests and will favoured to take the win, with the weight advantage against a natural super-bantamweight a potential factor.

However, he can't solely rely on his size advantage as he comes up against man who is a former world champion who can punch, box and has shown the fortitude to tough it out on hostile ground in the past.

Doheny has a record of 22-2 with 16 wins inside the distance, so his punching power is certainly above average, but Conlan doesn't believe this will be an issue come the opening bell.

"He's not coming for a paycheque - he's coming to win but that's not happening," the 29-year-old former world amateur champion insists.

"If you look at his record and the guys he has beaten, they have all been stopped after. He might be called 'The Power', but who has he knocked out at the highest level?

"It will be his brains and boxing ability that wins him this fight, not his power."

It will be interesting what does happen when Doheny lands, but as Conlan says, he is more than just an aggressive brawler.

The Portlaoise man has excellent fundamentals out of the southpaw stance and a good engine, so this could well transpire to be a technical battle at times with Conlan a natural switch-hitter whose game-plan may well be to frustrate and punish.

Doheny's two defeats came against Ionut Baluta and admits he was underprepared, with the other a world unification defeat to Daniel Roman on a majority decision.

'The Power' was oh-so-close to stopping the Mexican-American in the seventh, but had to pick himself off the floor twice with the second knockdown coming from a body shot that could be one of Conlan's keys to victory in this one.

Fight day is here, it’s time for war! See you all after 💥🥊🇮🇪 #TheConlanRevolution pic.twitter.com/mwYpCuctYh

The dispute over weight has added a little bite to this showdown and Doheny has made his feelings known throughout the week, but he doesn't believe his emotions will get the better of him and that must be the case of he is to pull out the win.

With fans returning for the first tie in 18 months, it's sure to be a frenzied atmosphere but one that will not faze the Laois man.

"He's high-level opposition, so I've got to remain focussed on the job at hand," he agreed.

"I know the majority of the crowd will be against me. I'm 34 years of age, have been around the block in some of the biggest cauldrons in the world.

"It doesn't matter who they are screaming for - you just feed off the energy of the crowd and that's what gees you up."

There will be plenty of energy tonight despite the damp forecast as the actin inside the ring is sure to be red hot.

This is a fight in which both men have a realistic claim to victory, but Conlan just seems to have more ways to win and if he boxes smart and doesn't get drawn into a gruelling battle on the inside his slick footwork, defensive skills and counter-punching can help him to a points victory.