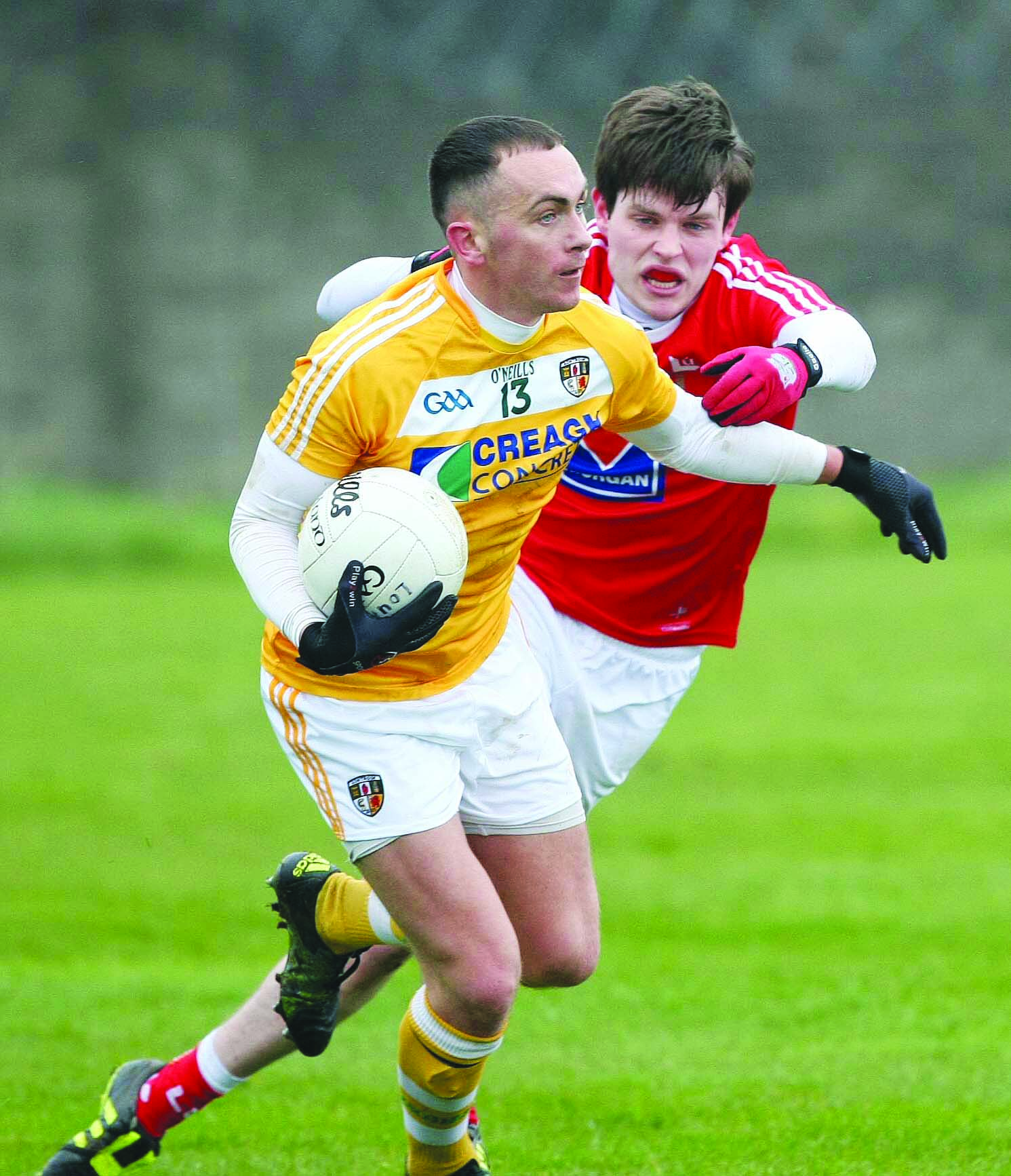 Brian Neeson breaks a tackle during Antrim's draw with Louth on Sunday. The sides meet again at Croke Park on April 23

KEVIN O’BOYLE says Antrim’s focus can now shift to the Championship following the completion of their National Football League Division Four campaign that yielded promotion and a place in the final against Louth on April 23.
The sides drew on Sunday in what was a was a dead rubber given both were already assured of promotion and a trip to Croke Park.
That extra game will certainly help in their preparations for the Ulster SFC preliminary round tie away to Fermanagh on May 15 and O’Boyle is expecting a much different encounter at Croke Park than what transpired during Sunday’s Corrigan Park clash.
“We have not looked at Fermanagh prior to now,” said the Cargin man.
“All we have been worried about is getting promotion and now we have done that we know they are out next target after the National League final.
“This (final) is competitive football and it’s allowing us to set new targets.
“You saw what Louth were like there today. I know they made a lot of changes but they have a strong squad and it will be a competitive game in a couple of weeks’ time.”
While Antrim teams are not frequent visitors to Jones’ Road, the Cargin defender has lined out twice at ‘HQ’ when Antrim last won there back in 2008 with victory over Wicklow in the Tommy Murphy Cup final, but tasted defeat against Sligo in the Division Three final of 2010.
The 28 year-old schoolteacher is naturally looking forward to a return to the Dublin 3 venue and believes the extra competitive game will also assist their preparations for their Ulster Championship meeting with Fermanagh on May 15.
“Any time you grace Croke Park you are grateful to be on it,” said O’Boyle.
“I’ve been on it a couple of times now with the Division Three final and the Tommy Murphy Cup.
“They aren’t matches that other people would look at, but I’m grateful and I know the other boys are to be there. That is where you aspire to play so you can say in the years to come that you graced that field.
“The other side of it is that it’s another competitive game for us going into the Championship and that is something that will be very valuable.”
While a trophy would round off Antrim’s League campaign perfectly, promotion to Division Three is the real prize.
This was achieved with the Saffrons winning their first six games and while they would have liked to have finished on maximum points, Sunday’s draw still leaves them unbeaten.
Certainly, that momentum can only be a good thing as they turn their attention to the Ulster Championship.
“When you go back to the start of the year and our targets, we weren’t looking at anything but getting promotion,” O’Boyle insisted.
“We started off very well with a good pre-season and built momentum the whole way up.
“We would have liked to win today to end the season with seven wins to continue the momentum, but we did finish up unbeaten. That is great preparation going to Croke Park which again leads to good preparation for the Championship, so everything’s a plus at the minute.”
O’Boyle was not part of the Antrim panel last year having taken a year out, but like several others including Kevin Niblock, Brian Neeson and brothers, Michael and Tomás McCann, he returned to the fold for 2016.
The management team of Frank Fitzsimons and Gearoid Adams have created an excellent environment to work in according to the Cargin man and having built early momentum that grew throughout the League, O’Boyle is hopeful this can continue through to April 23 and beyond.
“Gearoid and Frank have a good set-up that everyone has bought into. Everyone is back in so things roll from one to another,” he agreed.
“Thankfully we got that opening win (in Carlow) and it went from there.
“Everyone is listening to them (management) so hopefully it continues as winning breeds success. We just want to keep that going now through to the League final and Championship.”