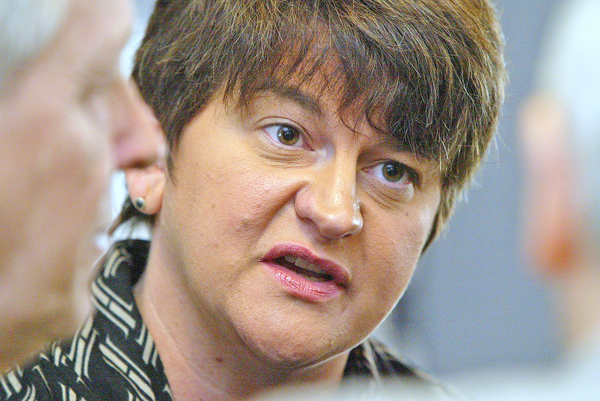 Arlene Foster remains in office amidst the gathering storm

A VOTE calling for Arlene Foster to be excluded from holding ministerial office for six months failed yesterday in the Stormont Assembly.

Over half of the 75 MLAs who voted backed the motion. However, cross party support was not given, with Sinn Féin abstaining from the vote, and the motion fell.

“We will now bring forward that amendment as a motion to the Assembly at the first opportunity in January,” she said.

"The SDLP's motion was always going to fail and let the DUP off the hook. It did not deal with the key issues around the RHI scandal.”

She added: "The SDLP voted to keep the RHI scheme open even after it became clear that it was flawed, that it was costing the public purse hundreds of millions of pounds and was potentially corrupt.

"The real test for the SDLP is whether they will support our motion which calls on Arlene Foster to stand aside and the establishment of an independent investigation which is robust and time-limited and led by a judicial figure."

“I think it’s outrageous that after everything we have discovered about this scandal Sinn Féin are still willing to be a crutch for the DUP to lean on. They claim to want to restore confidence in the Executive office—an office which is up to its neck in NAMA, SIF and now RHI. Not only does the public have no confidence in the Executive office, they are absolutely disgusted by the goings on up on the hill.”

Leader of the Alliance Party Naomi Long said that the Arlene Foster has compromised the institutions by refusing to voluntarily step aside to allow an independent, judge-led inquiry into the Renewable Heating Incentive scheme

She said: “If she wished to, the First Minister could have demonstrated leadership by voluntarily stepping aside and initiating a short, time-bound, independent and judge-led inquiry into this matter. But rather by her approach, she has compromised the Speaker, the Executive Office and the wider power-sharing institutions by firstly breaking the joint nature of her Department and then not taking the opportunity to stand aside while an investigation takes place.

“The actions of the First Minister have unquestionably further damaged the standing of the political institutions in the eyes of the public today and I would ask her to reflect on what is more important – her political career or confidence of the public in the political structures.”

Meanwhile Assembly speaker Robin Newton has written to MLAs explaining his actions yesterday when he permitted Arlene Foster to speak regarding the scandal in a statement which was not approved by Deputy First Minister Martin McGuinness.