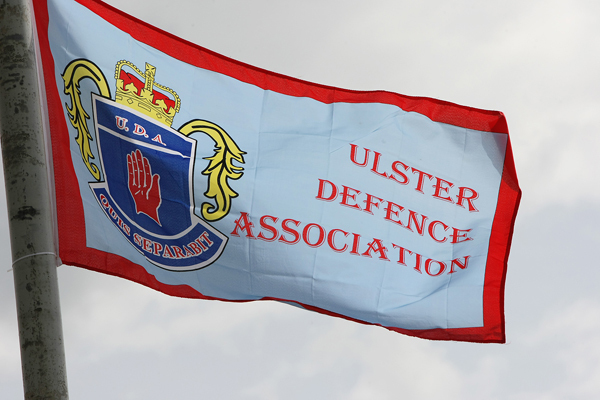 FOUR men have been arrested in North Belfast after a PSNI operation targeting the UDA in West Belfast.

The two-day search and arrest operation was carried out by detectives from the PSNI’s Paramilitary Crime Taskforce.

“During the course of these we have seized numerous paramilitary uniforms and associated paraphernalia including badges, flags and UDA ties. We have also found drugs – steroids and cannabis – as well as mobile phones, tablets, and a gun holster and ammunition.
“Four men aged 24, 32, 34 and 36 were arrested under Terrorism legislation in North Belfast on suspicion of being members of a proscribed organisation, namely the UDA. They were taken to Musgrave Serious Crime Suite for questioning.

“Two of the men, aged 34 and 36, have been released pending a report to the PPS for the offence of membership of a proscribed organisation. The 36 year old man will also be reported to the PPS for the offence of being concerned in the supply of Class C controlled drugs. The 24 year old man and 32 year old man remain in police custody at this time.
“While these searches and arrests focused specifically on the West Belfast UDA, we will continue to target all paramilitary groups and disrupt their illegal activities which only serve to blight the communities they operate in. These people prey on the most vulnerable members of their communities and try to control them by using fear and violence.
“The PSNI is committed to disrupting their activity and we are working hard to rid our communities of the paramilitary groupings but we need your help.
“I understand that people feel afraid to speak out against these paramilitaries, but police need information from local people – as we will act on information we receive. It may not always be visible and immediate but please be assured that every piece of information is assessed and acted on.”
Anyone with information should contact the PSNI on 101 or if you wish to remain anonymous please phone the Crimestoppers charity on 0800 555 111.