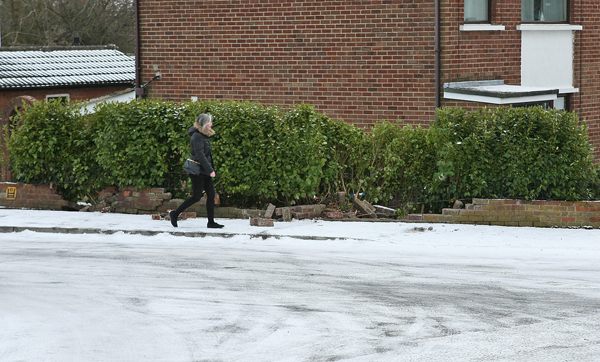 NIGHTMARE driving conditions have caused havoc across the city – but nowhere more than at one Belfast home where four cars crashed into a family’s garden wall – four times in an hour.
Long-term Willowvale Avenue residents Charlie Kelly and Gerry Hart told Daily Belfast it’s far from the first time that their neighbour’s wall has been destroyed in wintry conditions. The wall is on the crest of a sharp bend that lies at the bottom of a steep hill in the estate off the Stewartstown Road
“At least four cars have crashed into that wall in the past hour and only one of the drivers had the decency to go and tell the homeowner, the rest just drove off without saying a word,” said Charlie. “Unfortunately for my neighbour this is an annual occurrence that comes with the bad weather. A lot of cars cut through these streets and take the corner too fast, not realising just how icy it can get – it’s like glass at the minute. This year the snow is very compact, it’s very slippy and it will only get worse as it freezes overnight. Even cars taking it slow don’t stand a chance on that corner.”
The two local men are at a loss to know why the Department for Infrastructure (DfI) stopped supplying grit at the accident black spot several years ago.
“Every year me and Gerry go out and grit the roads but we’re getting old and no one’s willing to help – we haven’t even got the grit to do it if we could,” added Charlie. “The last time we had snow my daughter phoned the council but they said it was the Department for Infrastructure’s area, but they just give you an automated message and a reference number. It feels like we’re on our own with this year after year.”
Gerry said motorists and pedestrians in the area had been “incredibly lucky” to escape injury. “I witnessed the first car and after raising the alarm to Charlie before heading down only to see another two cars hit the wall within 10 to 20 minutes,” added Gerry. “The other cars behind them just skidded, missing them completely. This all happened between 2.30 and 3.30pm, a time when young children are getting out of school and if this continues somebody is going to loose a life out there this is a threat to life now.
“We have moved cars and put grit down each and every year for the last 30 years,” revealed Gerry. “Today after the accidents I went to do it again only there’s no grit in the area, not one box. Something needs to be done to ensure this doesn’t happen again. We put our faith in other people but nothing’s being done.”
Although it’s the responsibility of the DfI, Belfast City Council agreed to help out last night after the intervention of Iocal Sinn Féin Councillor Matt Garrett.
“These are dangerous conditions and it’s desperate for the residents,” he said. “I asked Council officers to grit the area tonight to try and prevent any further incidents and they have just finished. We'll be picking up the incident also with Roads Service who have ultimate responsibility for grit bin provision and salt distribution.”