Fr Paddy always wanted to be a priest 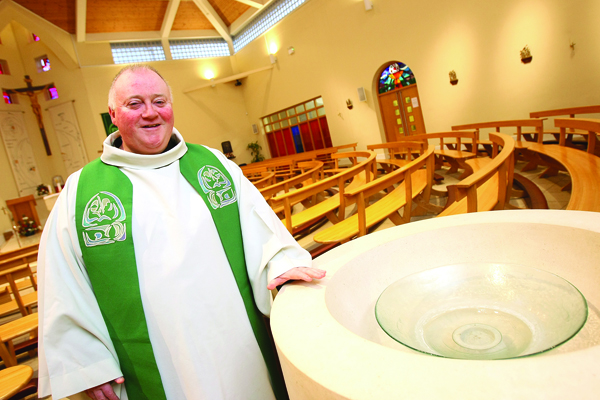 FATHER Paddy McCafferty has been the parish priest of Corpus Christi Church in Springhill since October 2016. The Rathcoole man who was ordained in 1989 says he never wanted to be anything other than a priest and added that it’s his pleasure to be a servant of the people.
“I was in Crossgar for two years before this but I have been a parish priest in Poleglass and Turf Lodge,” he said.
“I’ve lived on the Glen Road and I’ve also worked in North Belfast in the Bone and Ardoyne, so I know this part of the world very well.”
Father Paddy has been a priest for almost 29 years now and says as a young boy he never dreamed of being anything else.
“My story was quite typical, since I was a young child I was drawn to God, to spiritual reality and in my case I was especially drawn to Mass.
“I loved Mass, I would have gone to every single Mass, I was fascinated by it. If there were twenty masses on in a day I would have been at every single one.
“All I ever wanted to do from a young age was be a priest and I’ve no regrets whatsoever about it. I would highly recommend it as a life.”
Asked to describe a typical day in the life of a parish priest he said: “The most important part of my day is the Mass, that happens each day at 10am, then you could have a few funerals.
“Your typical day is basically talking to people. People come to me with their problems and worries, I visit the sick and am involved with the local school. I do this as well as the general maintenance of the parish. It’s very important to get your prayers in as well! Mass is the central point of my day.”
When it comes to funerals it’s not just the Mass itself that the priest is involved in.
“We deal with the family and work closely with them in the organising of the funeral, we visit the home of the deceased and minister to people in their grief.
“Administration is also part of my ministry but the most important part is the pastoral side of things. Engaging with the people in their daily issues, trying to help and comfort them, trying to encourage them and give them hope, reassure them and be there for them. As a priest you are the servant of the people and you must put the people first, which is my pleasure.”
As a priest working in a busy parish Father Paddy says he can’t close his door at 5pm.
“You can never be sure that you’re closing the door for the day or the night. Sometimes calls come through in the early hours.
“You plan your entire life around your parish and its activities and that also includes your time off. I take a look at the calendar and if there is a week or two that is relatively free of weddings I can arrange for some time off then.
“Being a priest means your life is not about yourself, it’s about the needs of your parish, although it is essential to have some ‘me time’ otherwise you’ll burn out. As a priest you’re entitled to four weeks a year and three weekends off, but I wouldn’t change being a priest for the world.”
Last week the Bishop of Down and Connor suspended the sign of peace during Mass due to issues around the current flu epidemic.
Father Paddy said: “The sign of peace is an optional part of Mass. It’s not integral. I know some people can find it a bit problematic and they should not feel uncomfortable during Mass.
“But because of the worry and risk around this very severe flu the Bishop has decided on medical advice to suspend it for a while.
“Eucharistic ministers sanitize their hands before giving out communion as does the priest. The chalice, which would have been shared, has also been suspended until this risk lessens.
“However, I would encourage people to stay at home if they have the flu as our older people are most at risk.”
And speaking of flu, what does the local parish priest do if he is sick?
“You just have to get on with it. If I’m sick I don’t give out communion, I say the Mass and get off site and tucked up as quickly as possible.”