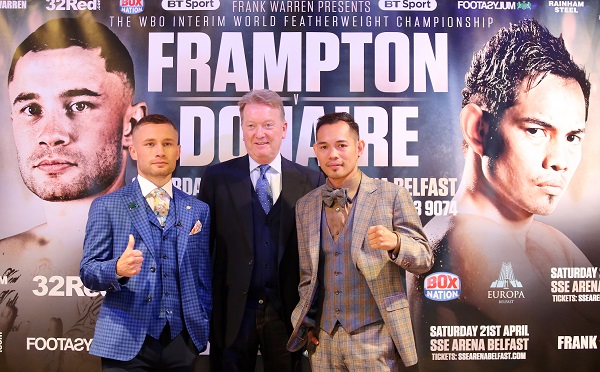 THE respect is there between Carl Frampton and Nonito Donaire – and not just in terms of boxing ability ahead of their interim WBO featherweight title clash at the SSE Arena.

While both men occupy the upper echelons of world boxing, both also fancy themselves as decent singers. Donaire said he was ready to throw down at yesterday's Europa Hotel press conference, while Frampton, who feels he is more of a solo artist to Donaire's 'boyband style', rejected the offer saying he wasn't prepared.

However, 'The Jackal' says he is more than ready for the serious business on Saturday night and is aware he must hit the right note or his hopes of a Windsor Park world title opportunity next time out will drift off into the Belfast skyline this weekend.

"I'm really excited for this fight and I have been since it was talked about," said the North Belfast man.

"To have a guy like Nonito Donaire come to Belfast to fight me feels like a bit of an honour. I'm lucky that it's happening here.

"It's a quality fight and I genuinely believe this has been my best camp. It's been my smartest camp because I've had a completely new approach to training – all the boxes have been ticked.

"I feel like everything is coming together and I'm ready to put on a big performance in front of my home crowd."

It will take a big performance for Frampton to get the victory this weekend.

Donaire, while 35 years old, still is a massive threat and is being treated as such.

The Filipino is a multiple-weight world champion and ex-World Fighter of the Year, so underestimate him at your peril.

The Tiger’s Bay man is certainly not thinking this is merely a formality and was quick to scotch the notion that Donaire's only attribute is his considerable punching power.

"He's a quality fighter and in terms of accolades, he's accomplished more than anyone I've ever fought – a future Hall of Famer," stressed Frampton.

"Hopefully I can put myself in that bracket one day. Nonito Donaire is the best fighter I have ever faced so it's going to be a big thing for me to get the result here.

"I think it's a bit disrespectful to just talk about his left hook. I don't think it just takes a left hook to bring someone to be Ring Fighter Of The Year or a five-time world champion. He's much more than just a left hook.

"He has a brilliant slip right hand and throws the left after it. He's a quality fighter and can do a bit of everything, so I will need to be ready for different situations and I feel we have covered all the bases in camp."

The visitor has been all smiles in the build-up, displaying the look of a man who is at ease with these huge occasions.

He has enjoyed the welcome afforded to him since his arrival, but knows the heat is set to be cranked up as fight week rolls along, reaching a crescendo on Saturday night.

Like Frampton, he knows the hard work has been done. Now, it's time to perform.

"I think I'm gifted with great genes," he says of his reaction to training camp.

"My body has reacted great, but that is because of my mentality. A body can only be as good as the mind inside the ring.

"I think I'm smarter now. I think I've learnt with the ups-and-downs from my career over the past couple of years to know where I am exactly, what I'm capable of and where my mind is. We're very confident going into this fight."

That confidence stems from a career in which he has seen it and done it all.

The exchanges at the top table were laden with compliments rather than insults, reflecting a deep respect between the pair. And as a man who’s been in the 'To Be Avoided' category for so long, Donaire is grateful for the opportunity to get back to the top table this weekend.
"My wife and I feel we are married to Carl," he continued.

"We wake up and see Carl, we sleep and we see Carl. Everything, we see Carl and that's what it's all about. I've got to say that Carl is an amazing fighter and I've got to give it to the guy. For a long time, I was the bogeyman of boxing and he has chosen this fight because it inspires him. I came to Belfast because he inspires me."

The fans, as ever, were out in force and that will be the case against when they meet at today's open workout at Victoria Square (1pm) and tomorrow's weigh-in at the Europa (2pm) ahead of a fight night that has a vice-like grip on the city's attention.

In match-ups at the top of the sport, world titles aren't necessarily needed given the protagonists, but Frampton wants another title belt around his waist before the year is out and victory on Saturday will put him next in line to face the presently injured Oscar Valdez. So the Jackal knows there is no margin for error this weekend.

"This is a fight that puts the winner in a position to fight Oscar Valdez and be a world champion again," he added.

"When I'm in the position to fight for a world title, these are the fights that will help me win it, not by fighting knockover jobs who I will win against easily. I'm experienced enough to know I need to be in fights that get me excited and nervous. That's when you're going to see the best performances from me."