Frampton hoping to box in Belfast before Christmas 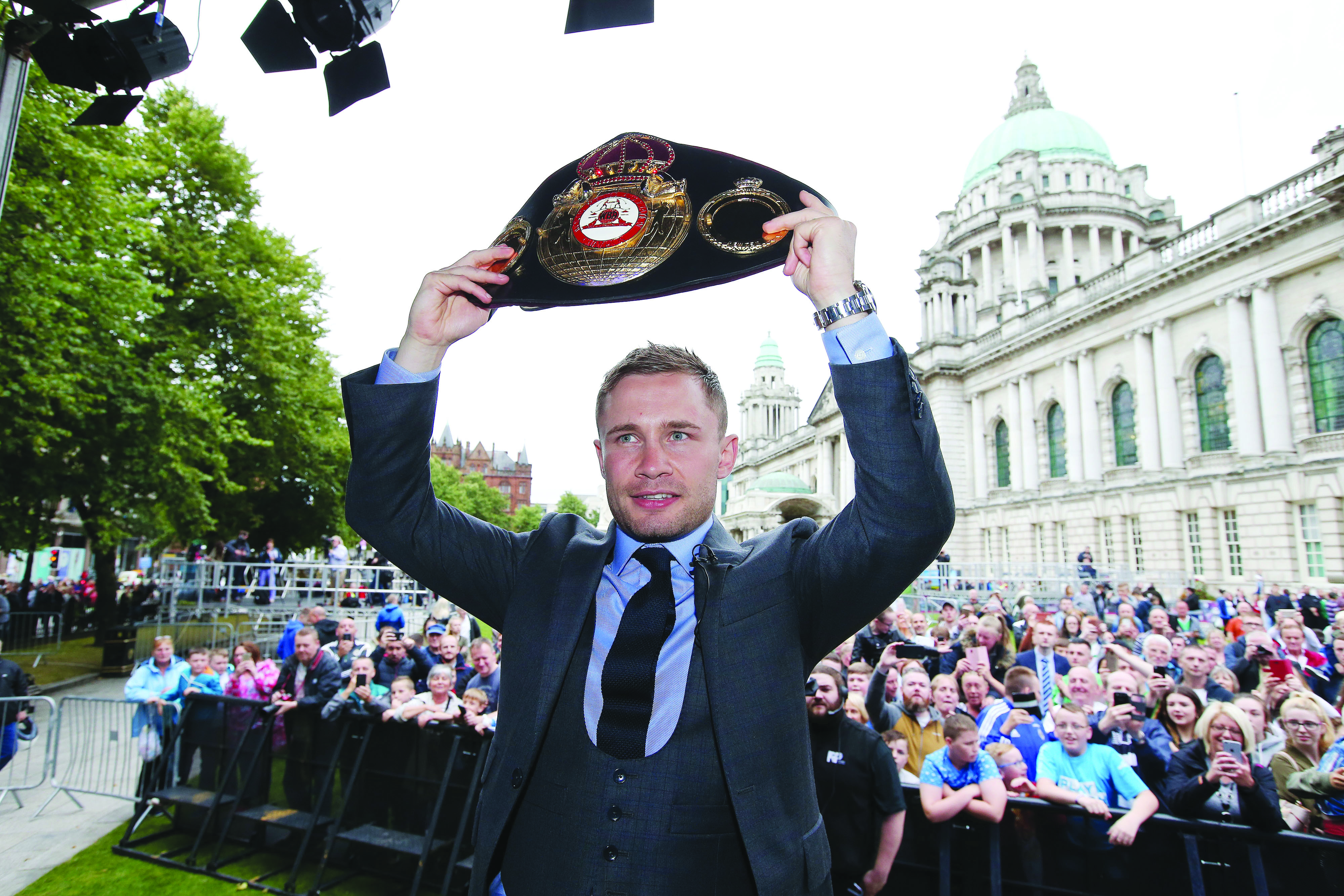 ‘The Jackal’ was greeted by thousands of fans following his unforgettable victory over Leo Santa Cruz to claim the WBA title at the Barclays Centre, Brooklyn on July 30 which saw him become just the second ever Irish boxer after Steve Collins and first from the North to become a two-weight champion.

Belfast Lord Mayor, Alderman Brian Kingston, First Minister, Arlene Foster, deputy First Minister, Martin McGuinness and Sports Minister Paul Givan were there to greet the 29 year-old who was there with his family including children, Carla and Rossa.

Also present on stage was Frampton’s trainer, Shane McGuigan and manager, Barry McGuigan who won the same WBA featherweight title 31 years ago and they thanked the fans who made the trip to New York three weeks ago for what turned out to be an historic night for boxing in the city.

However, the star of the show was Frampton and the North Belfast man – who also had a City Hall reception after beating Kiko Martinez for his first title back in September, 2014 – said it was an honour to have been recognised for a second time.

“There are more people here,” he noted as fans mobbed him for photos and autographs.

“I was very proud the first time, but that was good for six o’clock on a Friday night. It was great to see. I’m very grateful to everyone for coming out.”

Fantastic It has been a fantastic year for Frampton who is now in the running for ‘fighter of the year’ following his win against Santa Cruz and victory over long-time rival, Scott Quigg in Manchester back in February that saw him add the WBA super-bantamweight title to the IBF version he held after that win against Martinez to become the first unified champion in Irish boxing history.

A proud Belfast man, Frampton has not boxed in his home city since defeating Chris Avalos in February of last year and is hopeful he can tick that box before the year is over in order to spend Christmas with his family.

“It was special to go away from home and win it (title), but I want to fight at home now,” he said of the Santa Cruz victory.

“I’ve had two fights on the road, three actually (the first in El Paso against Alejandro Gonzalez Jnr last sumer) so I really want the next fight to be in Belfast.

“We will get something sorted. I’ve told the team I want at least one fight a year in Belfast, so we’ll see how we go.”

The Santa Cruz rematch looks highly likely, but the 9,000 capacity SSE (Odyssey) Arena would be considered too small for a fight of that magnitude, so may have to take place outdoors in Belfast next summer, but could be held in Las Vegas or even in New York once again if it is to be done in December.

There is also a unification clash with IBF featherweight champion, Lee Selby on the horizon but again, would probably require a bigger arena in either Manchester or London if held in winter.

Whatever is next, Frampton intends to return to training before long and said that a slight hand injury picked up in his win over Santa Cruz is not a problem.

“It’s ok. It was a wee bit sore, a bit of muscle damage but that’s all,” he revealed.

“There are no major issues from the fight. I’ll take it easy now for the next couple of weeks and then start training again.”