Frampton ready for War as he bids to silence the doubters 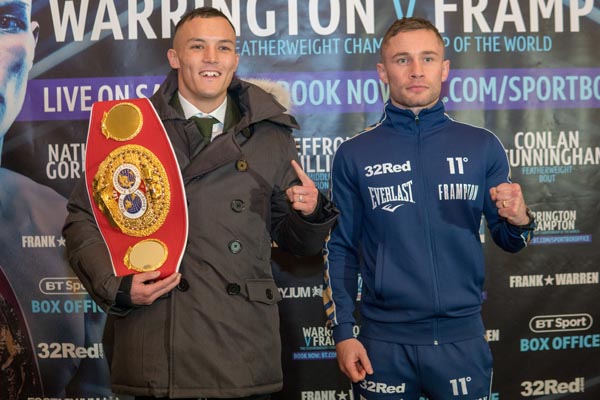 CARL Frampton says victory over Josh Warrington on Saturday night in Manchester will be one of his sweetest victories having been written off in some quarters.

‘The Jackal’ has lost just once in a 27-fight career, to Leo Santa Cruz in a rematch in January 2017 when he lost the WBA featherweight title he won from the Mexican the previous summer.

It’s taken nearly two years for the North Belfast man to get back into a world title fight, a lot longer than anyone could have imagined, but with Warrington’s IBF belt up for grabs, the 31 year-old says he has no intention to let his opportunity slip.

“I lost to Santa Cruz in a close fight having beaten him the first time and all of a sudden, I’m finished,” he said at yesterday’s final press conference.

“I’ve gone around the houses to get this world title shot when really, I should have walked back into one after the Santa Cruz loss. I’ve had three fights since then so I’m not letting anyone take this away from me. I’ve never wanted a title so badly.”

Frampton will enter the ring on Saturday as the favorite, but most are expecting a hard-fought and competitive battle.

Frampton said he has “total respect, but no fear” of Warrington and the Leeds man’s all-action style, adding that his scientific preparation under trainer, Jamie Moore has him now at the peak of his powers.

Naturally, Warrington is supremely confident following his title win over Lee Selby back in May when he was also the outsider, but says the momentum gained from that victory will propel him to even greater heights, but is taking nothing for granted against the former two-weight world champion.

“I respect Carl as a fighter and I’ve not looked at him as over the hill or finished,” he insisted.

“I’ve gone into this training camp preparing for a Carl Frampton in his prime and that excites me.

“That night in May (when I won the title) gives me confidence and momentum to go up another few levels and I can find that this weekend.”

Frampton agrees it will be a tough and exciting night, but given his past victories including his career-best against Leo Santa Cruz in July 2016, says he knows he is capable of great things and fully intends to rip the title from Warrington and set-up a huge 2019 when the goal will be to unify the division.

“I believe that he’s a very good fighter and this is going to be a very tough fight, but I believe that I beat any featherweight in the world on my day,” he stressed.

“Josh Warrington is a featherweight and I believe I can beat them all, but I’m fully focused on this one and I’ll give him the respect he deserves.

“I’m willing to put it all on the line to get the win and knowing Josh a little bit and seeing we have the same mindset, I think this is going to be an incredible fight.”