From Ardoyne to Palestine: Fra’s journey of solidarity 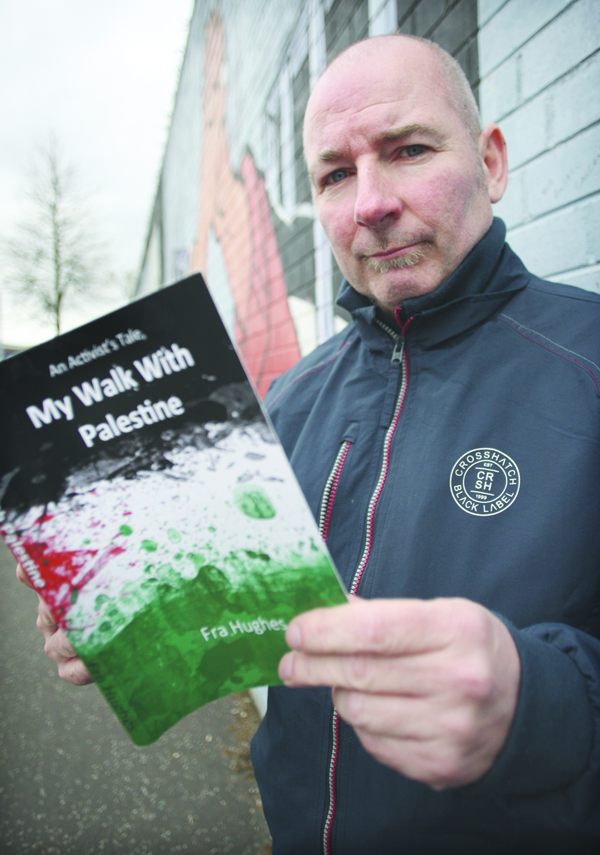 Fra Hughes with his new book ‘My Walk With Palestine’

THE story of Ardoyne man Fra Hughes’ journey to Palestine is as unforgettable as it is inspiring.
His new book ‘My Walk With Palestine’ fascinatingly catalogues the Palestinian solidarity work that he and others have been involved in for a number of years.
The tale begins in earnest as he tells about his trip to Gaza in 2010, just a few short years after the second intifada, the Palestinian uprising of 2005.
However, to understand why a man from Belfast would find himself in the besieged Gaza Strip, it is necessary to understand the circumstances in which he himself was politicised.
“I would have grown up at the height of the troubles,” Fra explained.
“A lot of people here became politicised because they were living under foreign military occupation. People had a choice as to whether they were going to get involved in activities where you could end up with 25 years in jail or with a bullet in the back of the head. I decided that wasn’t something that I was prepared to do, but I was politicised by what was going on around me.
“At that time I then started to see the parallels across the world. I saw the republican struggle here and I saw what was happening in places like Palestine. I remember watching the hunger strikes here and then seeing the PLO being forced out of Beirut by the IDF in 1982.”
While Fra was able to recognise the similarities between Ireland and Palestine at an early age, it was the emergence of alternative media sources that inspired him to take action.
“In 2009 I started getting involved in social media and I noticed that the narrative that you get from the mainstream media – an awful lot of it is propaganda and we saw that during the conflict here,” he said.
“I started to see alternative media online and I started to see what was really happening in some other countries like Palestine. Through social media I was able to become self-informed. I started to inform myself about what was happening in the world in a way that was different from the narrative that was being pushed by state.”
He continued: “In 2010 I saw stories about the boat from Turkey that tried to bring medical supplies to Gaza, the Mavi Marmara. The Israelis illegally hijacked that boat and they murdered people on it. It really shocked me. After that a local group of people came together to try to do some support work and out of that grew my participation.”
Through his fundraising work, Fra would eventually meet Dr Saeb Sha’ath, the former Palestinian representative to Ireland, who suggested he should visit Palestine as a show of solidarity.
“We were raising money to send to a hospital in Gaza at the time, and Dr Saeb Sha’ath said that we should go over,” said Fra.
“He told me that it was the best way to show solidarity to the people of Palestine. I was very hesitant initially because they were still bombing the place from time to time. He put that seed in my mind and it took maybe six months for it to germinate.
“He said that the best solidarity would be to go and stand shoulder to shoulder with people who are fighting injustice.”
Fra continued: “The trip was daunting. I was worried about what could happen on the road, what could happen to us when we got there, and I was also worried that we could be targeted by Israel, because they don’t people showing international solidarity with the Palestinian people. They want to keep them isolated. I was thinking about the people they had shot on the boat from Turkey. If the Israelis shot us then it wouldn’t matter. We would be branded as people supporting terrorists. We would have been demonised.”
The siege-busting convoy to Gaza in 2010 is only really the beginning of Fra’s story, and his work has seen him visit Egypt, Jordan and even Syria. The book will undoubtedly be fascinating for anyone with an interest in Middle-Eastern politics or humanitarian work, but the story is also captivating because it a personal one.
It gives the reader an insight into the friendships that Fra and others have created through their work, and vividly conveys the emotions felt on their incredible journey.
From a reader’s perspective, ‘My Walk With Palestine’ is inspirational, and Fra said that he hopes it will raise awareness of the situation in places like Gaza. All profits from the book will go towards supporting those suffering human rights abuses at the hand of the Israeli state.
Reflecting on his journey, Fra said: “It proves that if you put the time and effort in to do something then you can achieve it.”