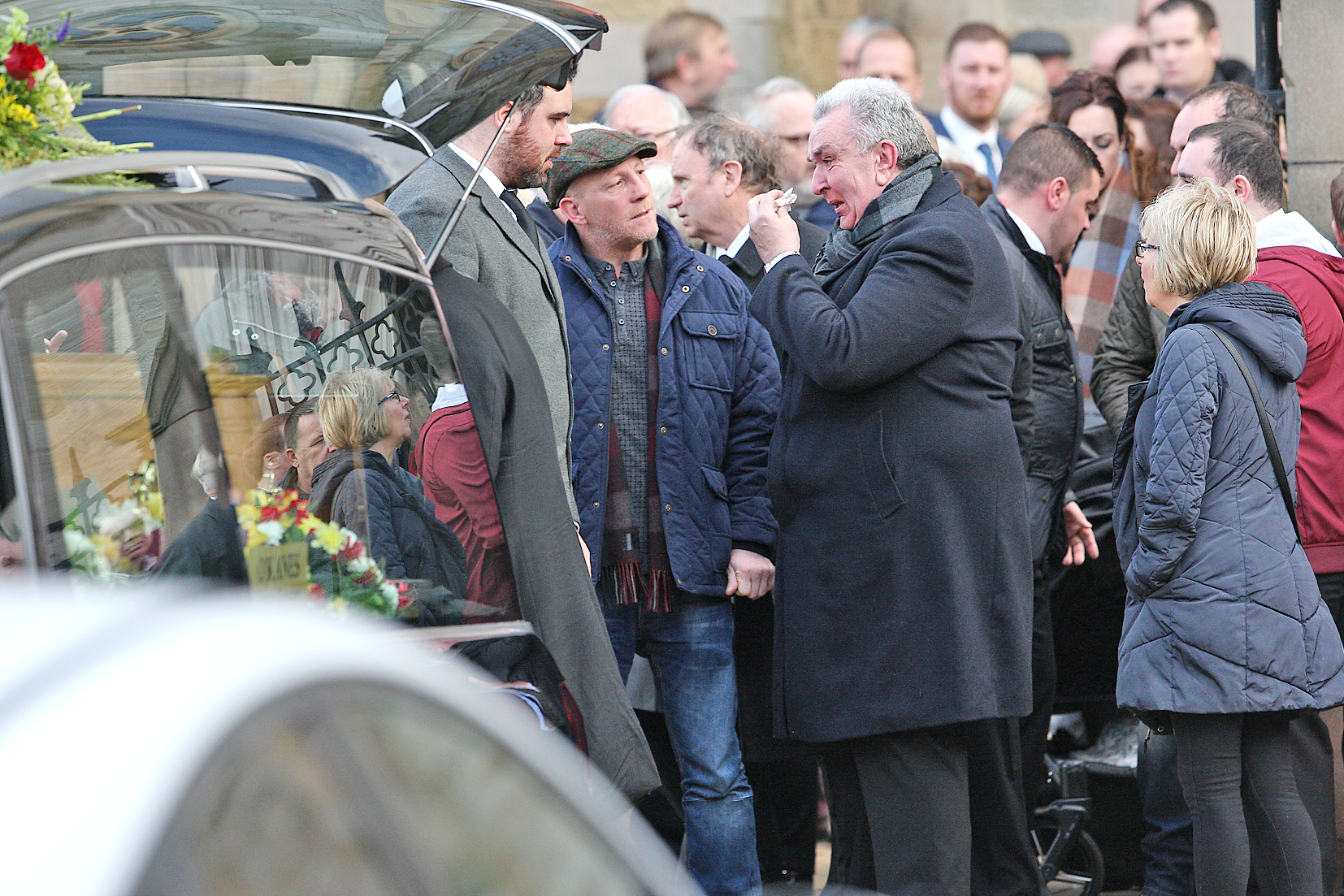 Mourners, including boxer Eamonn Magee, at the Requiem Mass for James Hughes

MOURNERS who gathered under grey winter skies at St Peter’s Cathedral for the Requiem Mass of 62-year-old murder victim Jim Hughes heard that “his death must not have been in vain”.

Mr Hughes was found dead in his 14th floor Divis Tower flat in West Belfast by the PSNI after the alarm was raised by a member of the public on November 6. 42-year-old James Devine, also with an address in Divis Tower, has been charged with Mr Hughes’ murder.

In his homily on Monday, Fr Martin Graham described Mr Hughes as “a larger-than-life character whose generosity of spirit knew no bounds”. And he told of the tragic death of James’ brother, Joseph, in an IRA car bomb explosion in 1974.

“65 years ago Joe and Margaret Hughes welcomed their first born son, Joseph on to this earth in Albert Place, just a stone’s throw from this cathedral,” he said. “22 years later, on March 26, 1974, Joseph was killed by a roadside bomb as he returned from tending cattle on the family smallholding at Hannahstown. We come together to mourn the loss of Joseph’s brother, James, in equally sudden and tragic circumstances.

“Many people in this congregation will have been recipients of James’ generosity. If I was to ask for a hands up from anyone who has a little trinket, a book, a card that James gave you I could imagine we would see a sea of hands in the air. They weren’t massive things but they were important because they were given with thought and meaning.”

Fr Graham spoke of how Jim trained as a psychiatric nurse in London.

“His last job was as the manager of a nursing home for older people. When he first took over the role, people sat around the residents’ lounge, waiting for their final day on Earth to come. Others would have seen people, broken by illness or the advance of years. James saw human beings with unused talents and skills and he set about discovering what those talents and skills were. The nursing home was transformed into a hive of activity as the residents grew their own fruit and vegetables and helped prepare their own meals.

“He gave them a purpose in life and they loved him for it. His determination to change things for the better was often at odds with a system that found it easier, as he perceived it, to keep people sedated and quiet and out of the way. The stress and strain of making these people be heard and seen cost James his own mental health.”

Fr Graham continued: “It was James’ natural reaction to help someone in need. Before he came back home James saved the life of a man who had fallen under a train. The man’s arm was partially severed and while everyone else ran, James, without a second thought, jumped on to the track, put a tourniquet on the wound to stem the flow of blood and accompanied the man to the hospital in the ambulance and didn’t leave him until his family arrived. No-one knew a thing about this until his flatmate answered a knock at the door one night. It was a man with a bravery certificate for James. Typically, James couldn’t understand why he should be getting an award just for helping someone in need. Like the Good Samaritan, James was passing by and immediately went to that man’s aid.

“Although James never returned to full time employment again, the vision he had, of a world where everyone is treated with respect and dignity, remained strong within him.

“James Hughes, Seamus McAodha as he preferred, must not have died in vain.”

Mr Hughes was later laid to rest in Milltown Cemetery.