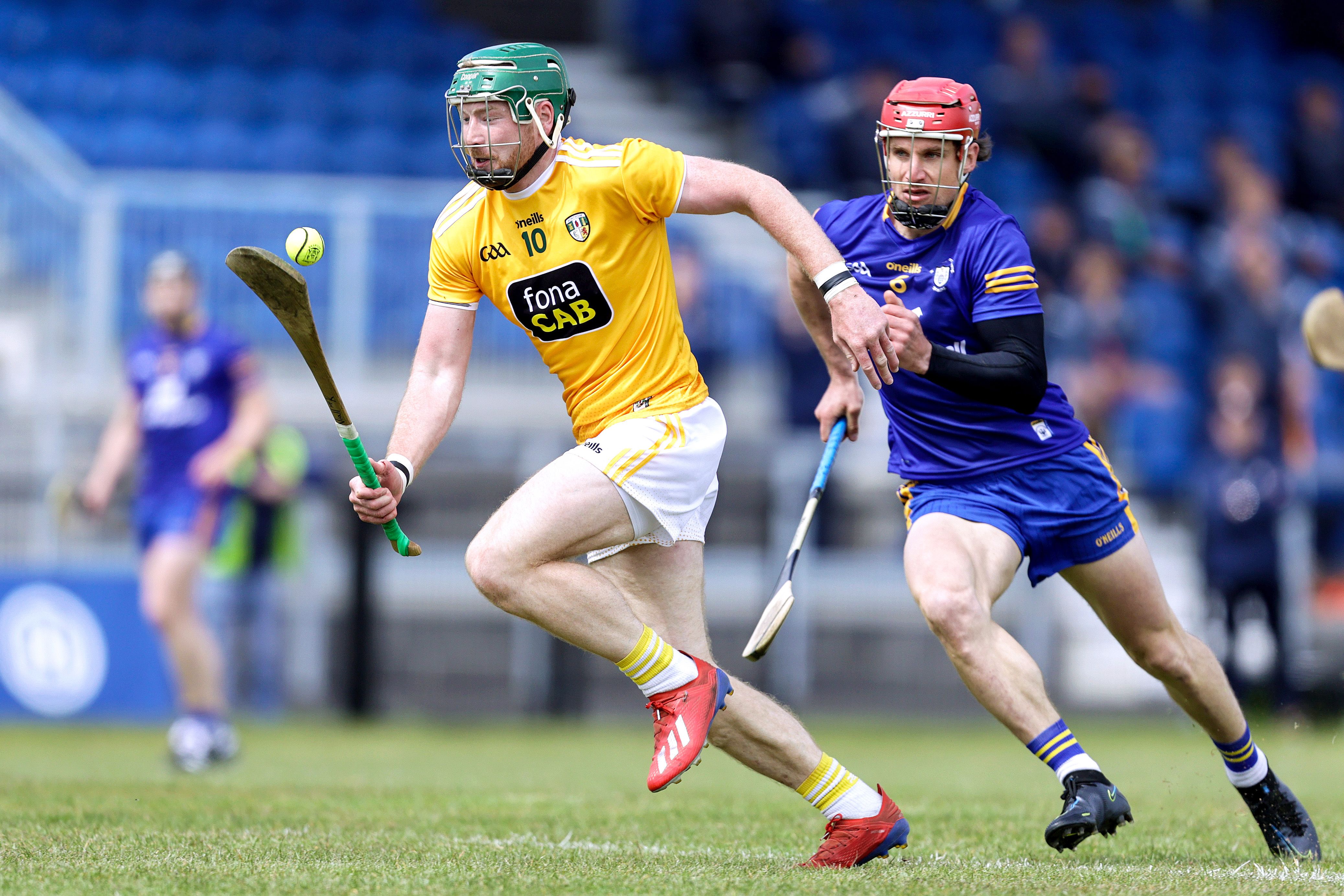 Allianz Hurling League Division 1B
Antrim 1-21 Clare 0-22
ANTRIM marked their return to Division One hurling with a sensational and fully deserved victory over Clare at a windy Corrigan Park this afternoon.

Darren Gleeson's Saffrons proved their worth and silenced doubters as they rose to the challenge of going up a level as they struck late through Neil McManus and Ciaran Clarke to claim the points on a day when they had heroes all over the field.

Clarke top-scored with 1-11, but in Niall McKenna they had the best player on the pitch by a distance with the Sarsfield's man going through a mountain of work to dive the Saffrons on.

Eoghan Campbell won everything that came his way, while Keelan Molloy had a great game in the engine room and chipped in with three points from play, but nobody in a saffron jersey put a foot wrong as they grew into this contest and drove for home in the second period after trailing early.

"I wasn't talking the proverbial in the week, but I have a solid belief that these lads can play at the highest level," said Gleeson after.

"Now they have to find out of they can back up that performance with another performance and keep the momentum going.

"The Leagues is massive for us. Not to take away from our win, but Clare experimented there a small bit. I'm just very happy with it and that they brought the positivity and momentum."

The visitors did make the better start and led by six midway through the opening half, but Antrim grew into this game with a Ciaran Clarke goal igniting their challenge and pushed on in the second period to find the answers to claim the points.

With a stiff wind at their backs, Clare made the brighter start with David Reidy and Tony Kelly landing early scores.

The hosts gradually settled with Conal Cunning opening their account, but after an exchange of scores, Clare pushed on and hit six of the next seven scores to move 0-13 to 0-3 ahead on 13 minutes.

Antrim had been competing well but just weren't clicking in attack until that point, but it would change as they began to find their rhythm, halving the deficit with points from Ciaran Clarke, Neil McManus and Cunning.

The Banner replied with Shane O'Donnell and Diarmuid Ryan splitting the posts in quick succession, but the momentum was beginning to turn and Antrim were within two with another three points on the spin.

Tony Kelly replied for Clare, but the sides were level on 29 minutes as a great ball into Ciaran Clarke saw the Ballycastle man get clear and whilst his shot was half-saved by Eibhear Quilligan, the ball spun into the net to leave it 0-12 to 1-9.

Clare responded with points from Ryan and Kelly, with he sides trading scores late in the half to leave it Clare 0-16  to Antrim's 1-11 at the break.

The hosts wasted no time in drawing level early in the second period with Ciaran Clarke tapping over a free and then a 65 after Conal Cunning's shot at goal was deflected out.

Cunning was then denied a goal with a fine block as it became clear it was Antrim who had grabbed the momentum despite Tony Kelly edging Clare back in front from a free.

Eoghan Campbell tied the game and then the Saffrons took the lead for the first time with Keelan Molloy thumping over from out on the right.

The second period was very much nip-and-tuck with the sides going score-for-score, but it was always Antrim who were edging ahead in the exchanges as they were winning the breaks with hooks, blocks and some big challenges forcing turnovers.

Cian Clarke was knocking over the frees with Tony Kelly doing likewise, but when Diarmuid Ryan - moved into the forwards for the sec and half - pointed on the turn to level the game for the eighth time on 69 minutes, there was a sense this game may end up with honours ever.

However, Antrim just had that little bit extra and it was Neil McManus who hit the score of the day in stoppage time as he sold a beautiful dummy just outside his own 45 to jink onto his right and land a monster score to restore the advantage.

Clare battled for the equaliser, but were snuffed out and from a breakaway, Antrim won a free when Dan McCloskey was fouled and Clarke popped over the award to seal a fully deserved victory.

It's a trip to Kilkenny next Sunday, but the Saffrons will head to Noreside with a spring in their step after this most perfect of starts.

"I wasn't worried (after trailing early) because that's happened to us before where we hit a little flat sport for 10 or 15 minutes," added the Antrim manager.

"I'm not worried about the lads as they are able to switch back and have a strong mentality. These are the things you work on in training: if a team is x amount ahead, then try to build it back.

"It doesn't have to be through goals, but you can do it by points and the lads brought forward what they do in the training field in that situation."