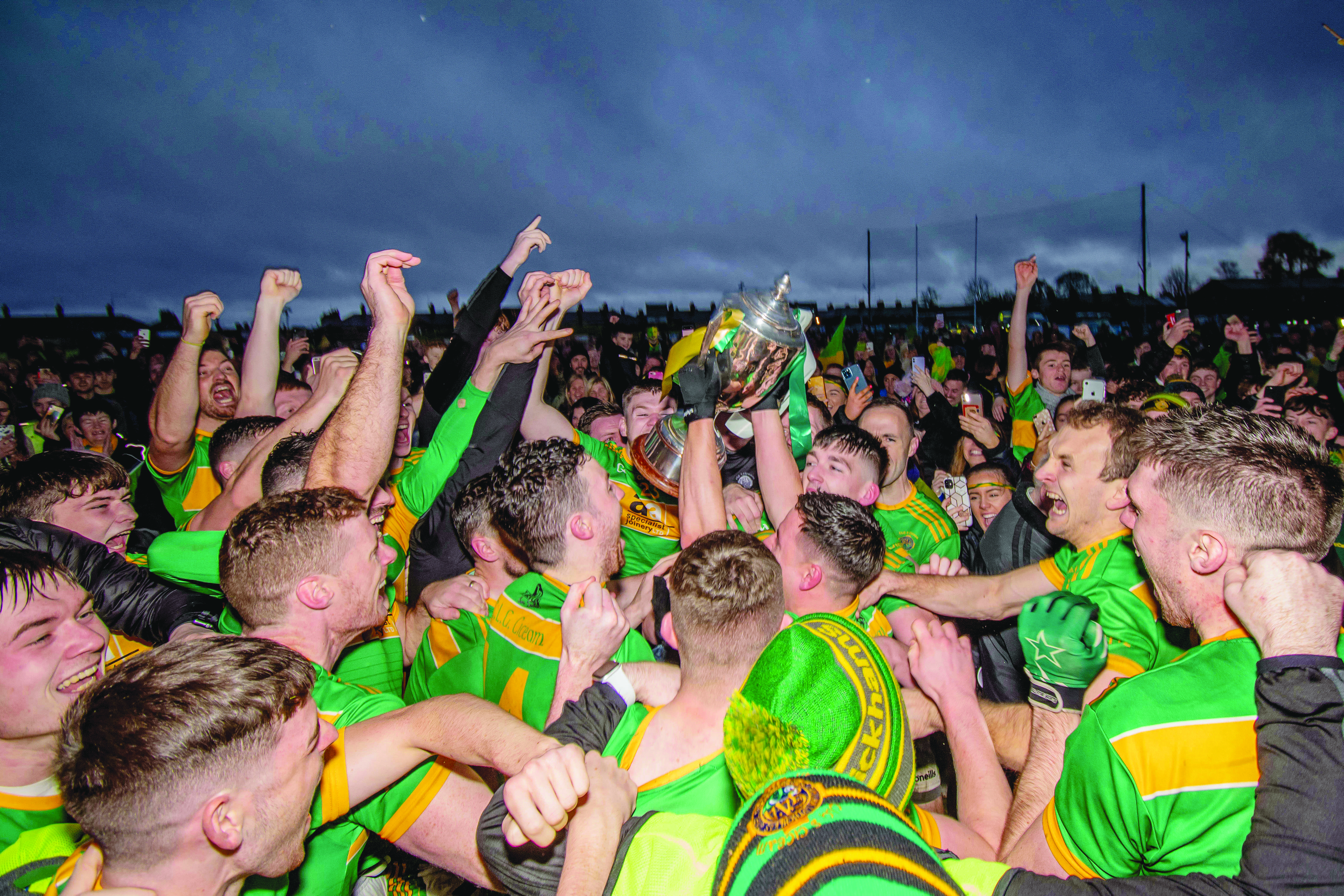 THE Antrim Club Championships are back with a bang this weekend as the football competitions across the three grades swing into action.

With any restrictions due to Covid now firmly in the rearview mirror, the games are once again spread over the weekend with Junior on Friday, Intermediate on Saturday and the Senior Championship throwing-in on Sunday.

Due to the Antrim ladies’All-Ireland final taking place on Sunday morning, those senior games have been pushed back to 6pm in order to allow for this travelling to Croke Park plenty of time to get back up the road.

In a tweak to the format, the group stage at senior will no longer operate on a home and away basis, meaning teams will meet once and therefore the pressure to hit the ground running will be fierce as there is little margin for error.

Defending champions Creggan will begin the defence of the Padraig McNamee Cup on home turf with Lámh Dhearg the visitors in what looks to be the pick of the games on Sunday.

Kickham's have shown no signs of slowing down as they have already secured the Division One title this season - their sole defeat coming away back in mid-March so the Loughshore men have been in formidable form and will provide a stern examination of the Red Hands in Group One that has the 'group of death’ feel to it with St John's and St Gall's meeting in the other game in the section at Corrigan Park on Sunday.

Just two of those four will reach the knockout stage, so every game will have an edge to it given the competitiveness of all four who will be eager to avoid an early exit.

Right, no more messing about! C’ship starts on Sunday! Social club open from 5pm and shop open during the game! A must-win game for both teams…@naomhgall pic.twitter.com/UL09MXvm3O

Group Two also contains for teams and this looks no less competitive with Portglenone probably most people's favourites to finish on top, but they are unlikely to have it all their own way as St Brigid's make the trip to Kelly Park, with the other game a South West derby between Moneyglass and Ahoghill.

Last year's runners-up, Aghagallon did not have the best league campaign and indeed, are set to face Ballymena in a promotion/relegation playoff due to their seance from bottom finish.

That will be put on the back burner for they open their Championship with a home game against the already relegated Gort na Móna who they beat convincingly last week, although a tighter affair is anticipated this time.

Tír na nÓg have the bye in the three-team group, same as O'Donovan Rossa in Group Four with Cargin hosting Naomh Éanna in the opener in that section.

The Erin's Own men were pipped to the league title but have shown enough that they are still in a good place despite their status of county champions coming to an end last year and they will be keen to get off to a winning start stat would leave them in a strong position to reach the knockout phase.

The action begins on Friday evening with the Junior Championship underway with all teams in action in the eight-team competition that neatly contains two groups of four.

Group One gets underway at Woodlands with Éire Óg hosting O'Donnell's with the visitors winning the league meeting between the teams and having had a better league campaign, the St James’ men will enter as favourites.

Across town later in the evening, Valley Park with be the venue for a North Belfast derby as Wolfe Tone's welcome Pearse's who will have high hopes that this could finally be their year having been there or thereabouts in the Junior competition in recent years.

Our senior men start their @AontroimGAA Junior Football Championship journey on Friday night with the visit of our neighbours @patrickpearses to The Valley for throw-in at 8:15pm.

Group Two will see a cross-city clash at Cherryvale where St Malachy's will attempt to hand St Agnes’defeat for a third time this year having won both league games between the two, while the other game takes place at Colaiste Feirste where Laochra Loch Lao welcome Ballycastle.

The Intermediate Championship takes centre stage on Saturday with Group One - the only of the sections to contain four teams - seeing all teams in action.

At The Cricky, Ardoyne will welcome Division Three winners St Patrick's, Lisburn with the North Belfast men without a win since the end of May as their encouraging form took a nosedive after the split, while at the Bear Pit, Sarsfield's welcome Dunloy for a rematch of the league game at the beginning of the month that went the way of the Paddies.

In Group Two in the evening, Ballymena host Glenavy with St Comgall's getting the bye, while at the same time in Group Three with Glenravel sitting it out, Davitt's have home advantage over Rasharkin after a very positive league campaign in contrast to the visitors who suffered relegation from the second tier.

In Group Four, St Teresa's will hope to get off to a flying start at Aldergrove with St Paul's watching on with interest.