Gaelic Games: Antrim make winning start to the year with victory over Down 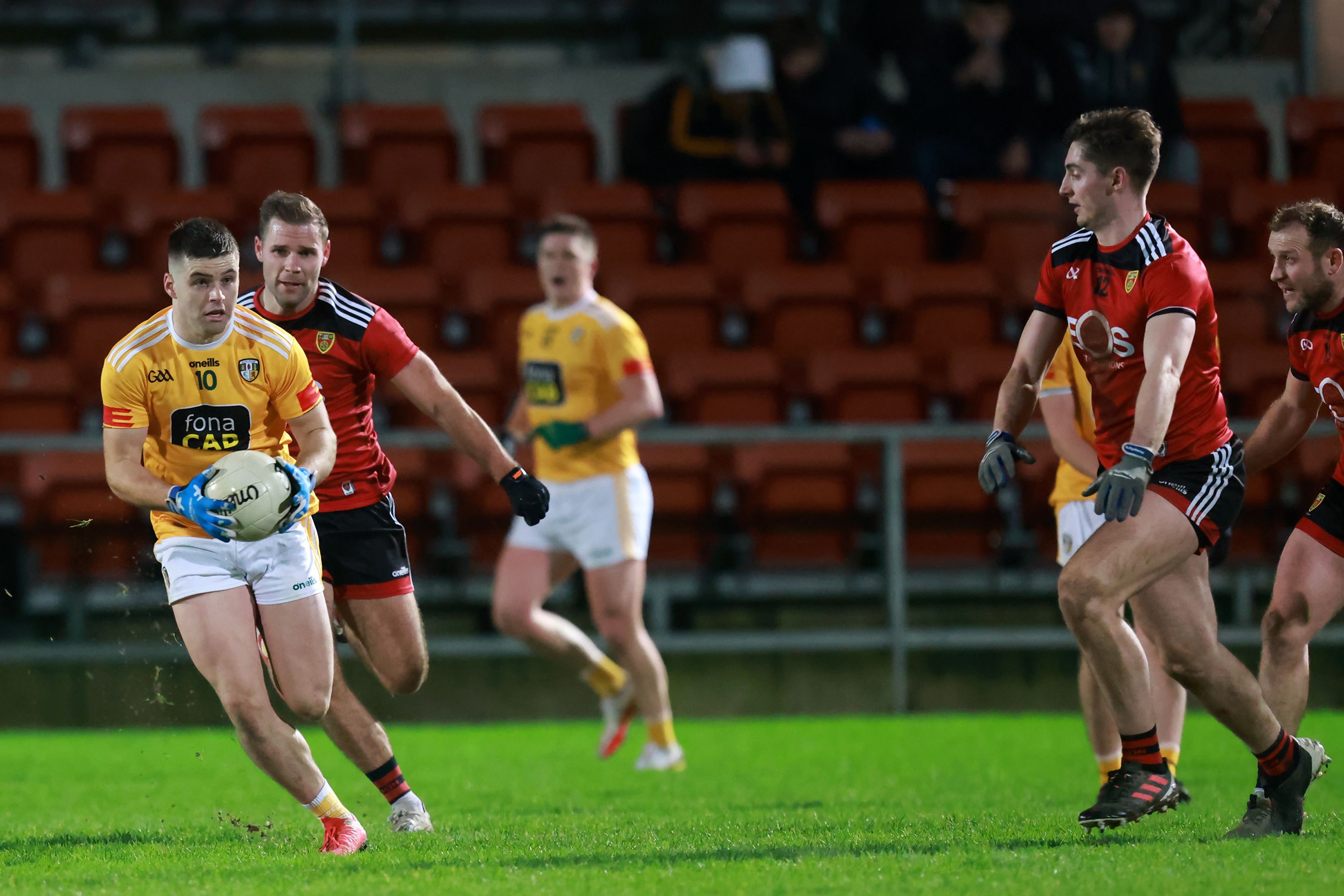 ANTRIM made a winning start to their Dr McKenna Cup campaign with a battling two-point victory over Down in Páirc Esler on Tuesday night.

Paddy McBride found the net early in the second half to move the Saffrons into a four-point advantage and they were able to withstand a Down fightback in the closing stages.

They also required a touch of good fortune in stoppage time when Barry O’Hagan drilled a 20-metre free at the Antrim goal. Yet, the ball crashed off the crossbar, flicked the back of Ricky Johnston’s head and went over the bar.

It would have been the equaliser had the Clonduff attacker found the net, but the hosts were second-best for the majority of the contest as they exited the pre-season competition with two defeats in Section A.

Speaking after the game, Down boss James McCartan felt the competition was useful in terms of giving new players game time, but is hoping to have a more settled panel before the Allianz League gets underway later this month.

“I suppose we are looking for players and some of them have been there before,” said McCartan.

“Some have been back from travelling the world and some have other commitments.

“There are a lot of boys who are carrying injuries. Anthony Doherty took a heavy knock, Caolan (Mooney) is going to the hospital for an X-ray, John McGeough tweaked a hamstring. The list goes on.

“When you don’t get as much of a lead-in time, you are asking to get boys up to speed quickly and into the cut and thrust of inter-county football. Other counties maybe had a few weeks head start on us.”

The Mournemen were edged out in their McKenna Cup opener last Friday as Donegal claimed a 1-13 to 2-8 victory in Ballybofey.

However, with more players available for last night’s clash with the Saffrons, McCartan made wholesale changes with just seven players retaining their places from the Donegal game.

Yet, Antrim got off to the worst possible start when they conceded a goal after just four minutes when Ryan O’Higgins fired home following an excellent off-load from Niall McParland.

McCann was off target with a handful of early frees, but he soon found his range and a fine point from play from Paddy McBride had Antrim back on level terms.

Pat Shivers (free) and Caolan Mooney exchanged points just before the water break, but Down lost wing-back John McGeough to injury midway through the first half.

The game was tit-for-tat for the final 10 minutes, but a stoppage-time free from McCann following a foul on corner-back Ronan Boyle gave Antrim a slender 0-8 to 1-4 lead at the break.

If Antrim made a poor start to the first half, they made amends at the start of the second as Paddy McBride palmed in a goal after Jamie McCann unselfishly passed the ball across the face of goal.

The four-point cushion was no less than Antrim deserved, but it didn’t last as Down came rallying back.

Points from McKernan and substitute Darren O’Hagan cut the gap to one before veteran Michael McCann took advantage of a mix-up in the Down defence to push the lead back to two points.

With 59 minutes played, Down moved level with back-to-back scores from Barry O’Hagan.

In years gone by, Antrim might have dropped the heads and tried to hold out for a draw, but the current squad are made of sterner stuff and they stood taller than their opponents in the closing 10 minutes.

Lámh Dhearg’s Conor Murray fired over a classy point under pressure just minutes after being introduced to nudge the Saffrons ahead once more.

McBride then brought his tally for the night to 1-2 with another point from play on 66 minutes and, when substitute Ryan Murray clipped over a point in the final minute of normal time, Antrim’s lead was three.

Now was the time for cool heads and they don’t come much cooler than Mick McCann. Having spent the majority of the second half aiding his defence, the Cargin ace rose high in the full-back line to claim possession when Down went direct in search of a late score.

When Cavan referee Maggie Farrelly awarded Down an injury-time free on the 20-metre line, O’Hagan had no option but to shoot for goal.

With no fewer than eight Antrim players spread across Oisin Kerr’s goal line, O’Hagan attempted to blast a shot below the crossbar.

Antrim breathed a collective sigh of relief when the umpire reached for the white and not the green flag as the Saffrons claimed a two-point victory in their McKenna Cup opener.

McGinley’s side now host Donegal in Portglenone on Saturday afternoon (1.30pm) with the winners progressing to next week’s semi-final as Section A winners.

Down, meanwhile, have a little over two weeks to prepare for another battle against Ulster opposition when they travel to Owenbeg to take on Derry in their Division Two opener on Saturday, January 29.

Depending on the result of Sunday’s Ulster Club SFC final against Derrygonnelly, McCartan’s squad may be boosted by the availability of their Kilcoo contingent.

Either way, McCartan is braced for a tough challenge against a resurgent Oak Leafers.

“We are going to play Derry in their home patch and, over the last few years, they’ve been going in the right direction,” added the Down boss.

“It is not going to be an easy task, but that’s what inter-county football is.

“You have to look forward to the challenges and see if we can get the best out of this bunch of players.”