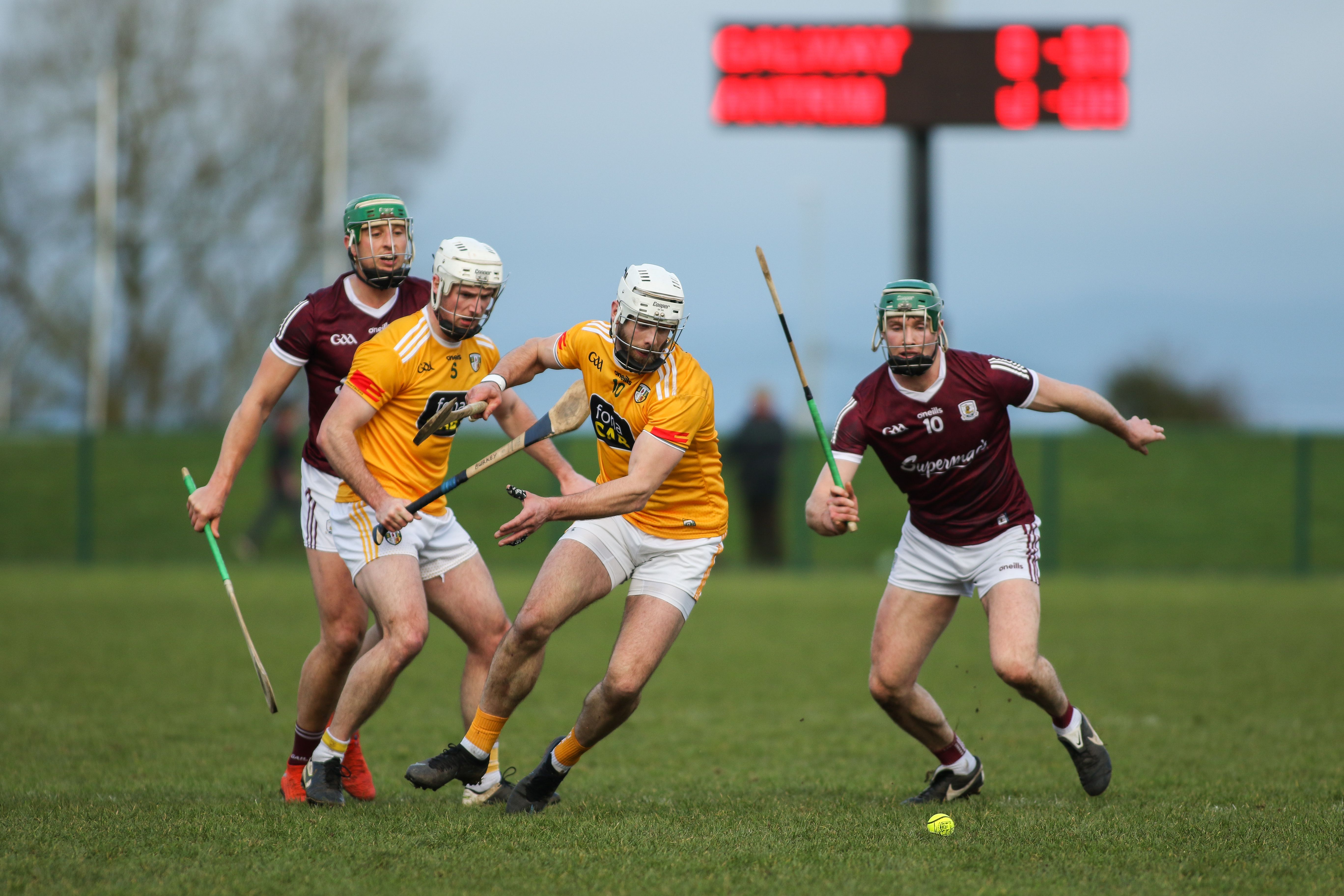 Leinster Hurling Walsh Cup, Group A
Antrim 1-17 Galway 1-23
ANTRIM'S Walsh Cup campaign may have ended in defeat to Galway at Darver on Saturday afternoon, but the Saffrons will be feeling much better about themselves than they were a week ago after a disappointing day in Offaly.

Six points separated the teams at the final whistle as both management teams rung the changes again and introduced some more established names to their line-ups in what was the final chance for players to stake their claim ahead of the National League that begins in a fortnight.

Antrim were much sharper than they were six days previous and will be fairly satisfied with their afternoon's work as they stayed with Galway for an hour, only for the Tribesmen to pull clear down the stretch as both benches were emptied.

There were marked improvements across the board with Gerard Walsh excellent at full-back, making up for his dismissal against Offaly, while there was plenty of industry across the board and some fine forward play with Seaan Elliott suggesting he could be ready for a breakout year.

There is a worry about the number of goal chances that are being passed up with Antrim having four big chances and took one with Michael Bradley turning home two minutes after John Fleming rattled the Antrim net, but on the flip side, chances are being created and that bodes well ahead of what will be a testing Division One campaign that begins with a trip to Nowlan Park on February 6.

"We thought we could have won it there at one stage in the second half," said Antrim selector Johnny Campbell.

"Probably the failing throughout the Walsh Cup is not taking our goal chances and it was the same today. A couple of chances (going in) could have put us ahead or right in the game, but we didn't take them.

"The game opened up in they tailed on a few points that made them comfortable on the scoreboard, but you have to be happy with our application after last week - it was night and day.

"Going forward into the Division One games, that has to be our base and if we don't bring that, we'll be in for a torrid year, but it's encouraging."

There was no slow start from Antrim this week as Keelan Molloy races through to point just 15 seconds in and while Galway replied with points from the returning Tom Monaghan and 17-year-old Gavin Lee to edge them ahead for the first time, Antrim hit four-in-a-row through Neil McManus, Seaan Elliott, Molloy and James McNaughton with McManus' point the result of a stunning point-blank from Eanna Murphy.

After a Niall Burke reply, Antrim had another sniff of goal on 10 minutes when the ball broke through to Michael Bradley who was a little off balance when trying to rise it and was forced to pull on the sliotar that went just the wrong side of the post.

Cathal Mannion and Elliott traded points before a timely intercept by Eoghan Campbell closed the door when Galway looked in on goal, but a pair of Mannion scores from places balls left the sides locked at 0-6 at the water break.

Galway upped the tempo in the second quarter as they out-scored Antrim by four to one in a five minute spell with top-scorer John Fleming landing a brace, but Antrim were doggedly staying on their heels and they hit back with three of the next four points as Elliott's fine afternoon continued with his third of the day although Galway had the final say of the half through Conor Caulfield and Mannion to go in at the half leading by 0-13 to 0-10.

Mark Gill extended the gap early in the second period, but a pair of frees from James McNaughton brought the gap back to two before the first goal of the game arrived on 44 minutes as the ever-dangerous Conor Whelan spun towards goal and played a pin-point pass into the paw of Fleming who rolled home.

This was cancelled out less than two minutes laster after excellent work from Elliott saw him play a ball to Dunloy clubmate Eoin O'Neill whose rasping low show was brilliantly saved by Murphy, but the rebound was turned home by the lurking Michael Bradley.

Galway would lead by 1-16 to 1-12 entering the final quarter thanks to points from Caulfield and Mannion, but had their goalkeeper to thank once more as he denied Joe Maskey as Antrim had to be content with Neil McManus converting the resulting 65.

There was still just three between the teams with 10 to play as Jack Hastings and Bradley traded points, but as Antrim empties the bench, Galway finally pulled away with five points on the spin, the last coming from a Padraic Mannion 65 after Stephen Rooney had made a huge block to divert Conor Whelan's goal-bound shot outside the posts.

Antrim did finish strong with three of the last four points from substitutes Ciaran Clarke (free), Conor Johnston and Conal Bohill, but it was Galway who claimed the win to round off their pre-season campaign on a positive note.

"There were little patches where we were getting excited and thinking it's coming and then Antrim came back into the game.

"On reflection, it was probably a real pre-season game where both teams had their passages of play, but we used the benching a lot of lads who hadn't played this year got their opportunity.

"In that sense you'd be happy that it was a good enough performance. Is there a lot more to go? Absolutely, but it's early in January yet and we are trying to build it."