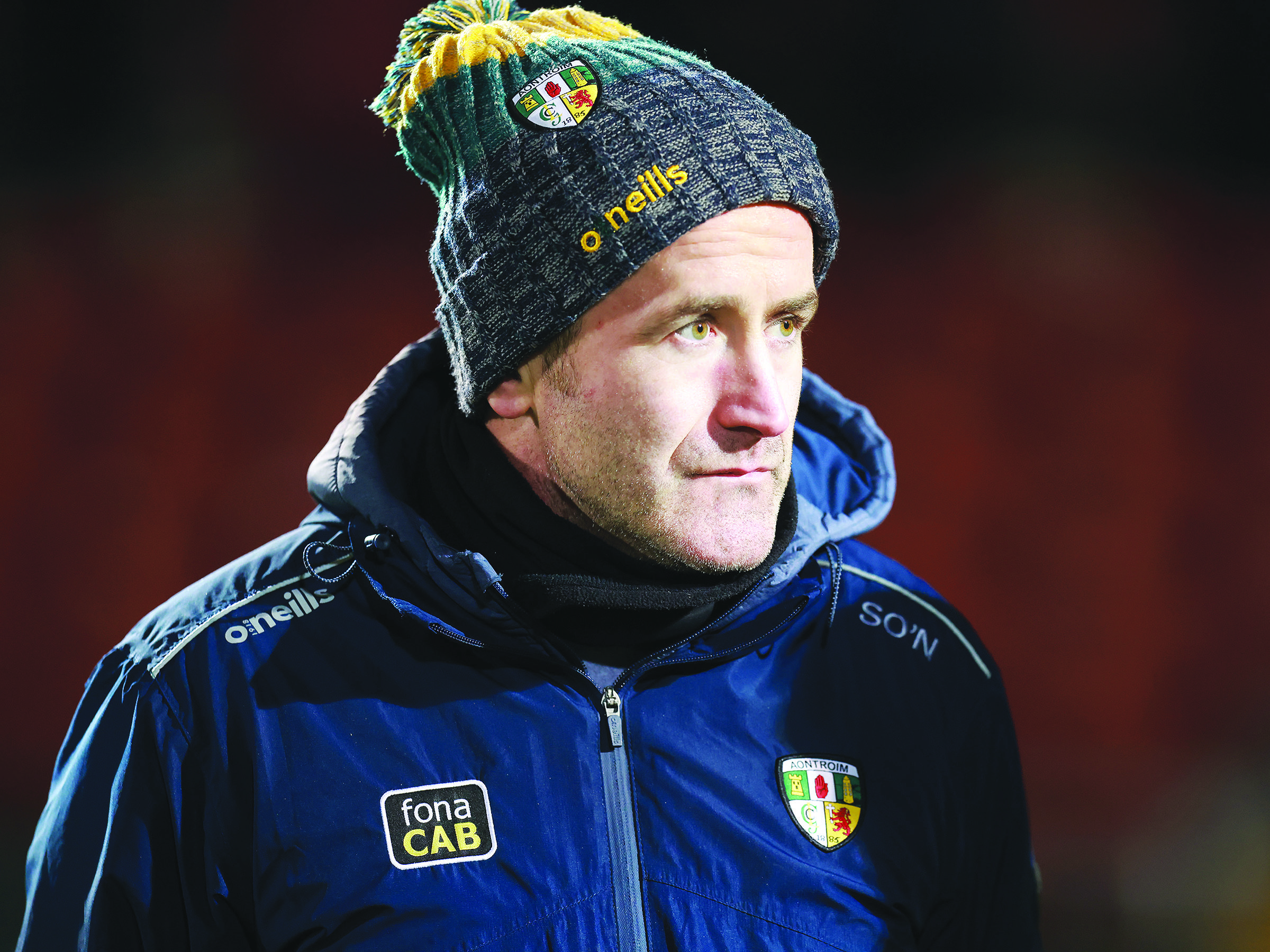 GAMES against teams from the top two divisions will greatly assist Antrim’s preparations for their forthcoming Division Three campaign according to coach Stevie O’Neill.

The Saffrons made a winning start to the 2022 season with a 1-12 to 1-10 victory over Down in Newry on Tuesday night and they host Donegal in O’Kelly Park, Portglenone on Saturday with a chance to progress to next week’s semi-finals.

Last year, the pre-season competition was cancelled due to the pandemic and the truncated Allianz League campaign meant that the new management team of Enda McGinley, O’Neill and Sean Kelly had only four games before the Championship defeat to Armagh.

Antrim gained promotion from Division Four last term and their return to Division Three sees them travel to Brewster Park to take on Fermanagh on Saturday, January 29.
As one of Tyrone’s most decorated inter-county players, O’Neill also captained the Red Hands to victory in the McKenna Cup back in 2013 and feels the competition still has great merit.

“It is massive because obviously Division Three is going to be very tight,” said O’Neill.

“It is a massive step up to what we were playing last year.

“Playing in the McKenna Cup is a brilliant challenge for ourselves and we’ll definitely relish it as it gives us good preparation for Fermanagh.”

There were certainly plenty of positives for the Antrim management to take from Tuesday night’s two-point win in Newry.

Four players, namely Ronan Boyle, Jamie McCann, Pat Shivers and Jamie Gribbin, all made their senior debuts while Moneyglass defender Paddy McCormick was introduced in the second half after a year away from the panel.

The aforementioned McCann was one of Creggan’s leading players last season and he caught the eye on his first senior start while Paddy McBride, Michael McCann, James Laverty and Ricky Johnston were Antrim’s best players on the night.

While Down could have plundered a late equalising goal when Barry O’Hagan’s effort from a free hit the crossbar and off the back of Ricky Johnston’s head resulting in just a point for the Mournemen.

The Creggan full-back didn’t know much about it and could afford to joke about it after the game. It was a slice of good fortune Antrim richly deserved and it would have been grossly unfair on the Saffrons had they departed Newry with anything less than a victory.

“It was nice to see it going over the bar because I felt we deserved the result and it gives us a wee boost to build on that,” stated O’Neill.

“We are delighted. It is never easy to come up to Newry to get a result and, thankfully, we got that.

“We tried our best maybe not to win with the amount of wides we were kicking, but we managed to hold strong and survive the Down fightback.

“The new lads and the older lads are working well together and they have been training well over the last number of weeks.

“It is nice to see that the work they are doing on the training pitch is starting to pay dividends.

“We’ve a lot to work on still and we’ve Donegal now on Saturday so we’ll look to up the ante and challenge the lads to put up a good performance again.”

Round 3 games in the 2022 @BankofIrelandUK Dr McKenna Cup this Saturday!🏆

Donegal also defeated Down by two points (1-13 to 2-8) when the sides clashed in Ballybofey last Friday night.

The Tír Chonaill men face last year’s beaten All-Ireland finalists Mayo in their Division One opener in Markievicz Park later this month and Bonner will be keen to secure at least one extra game next week.

Should Derry defeat Fermanagh in Rosslea on Saturday, the best runner-up across the three groups will need to have a win and a draw to their credit.
It will be a tall order for Antrim to take the scalp of a team still regarded among the best in Ireland.

O’Neill hinted that the team may be rejigged in order to give as many players game time ahead of that crucial round one fixture against Fermanagh on Saturday fortnight.

“There will be a few changes maybe. It is good to have a few games and you can try out new men and give them a bit of game time,” added O’Neill.

“A few men left the panel after last year and that happens in every panel.

“It is good that the new men came in and they’ve been given their chance and they are definitely taking it and pushing on well.

“That pushes everyone on in the middle age bracket and the older age bracket too and everyone is fighting for their place.”