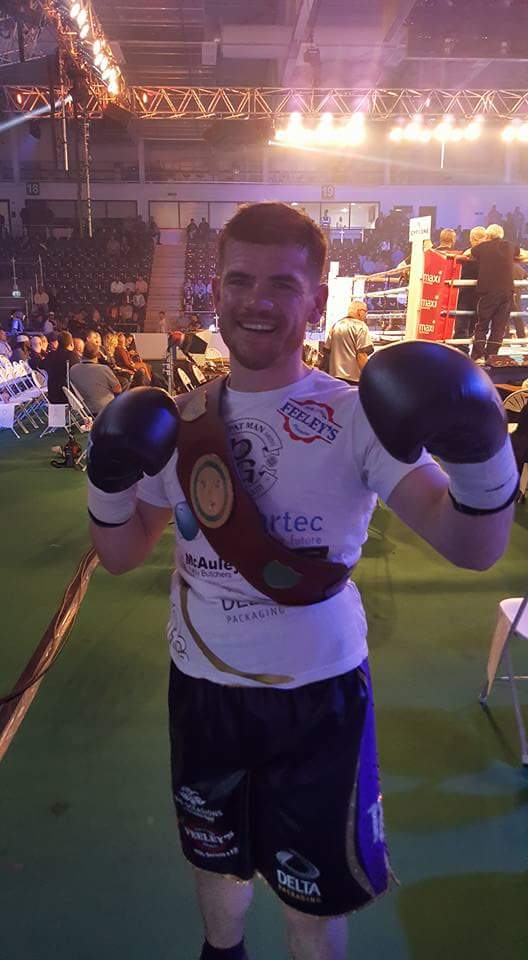 PADDY Gallagher says he is in no rush to decide his next move following last Saturday’s stunning first round knockout of Tony Dixon to claim the vacant Celtic welterweight title at the Cardiff Ice Arena.

Gallagher was fighting on the undercard on the Lee Haskins versus Ivan Morales with the Bristol native retaining his IBF bantamweight belt with a unanimous points victory.
Earlier in the night, Belfast’s Gallagher dropped his rival late in the first with a devastating over-the-top right hand.

The stoppage came despite Dixon making the better start.
Indeed, the hometown fighter caught Gallagher with a number of decent shots in the early stages of the opening round.

Gallagher admits he was surprised by the abrupt end to the fight.
“I always thought I would stop him, whether it was in the first or second or in the ninth or tenth,” said Gallagher.

“I was surprised more than anything else.
“Even though I though I could stop him, it was still surprising how it all happened.
“It just happened so quick. He was getting all over me and I was just trying to get through the round.

“Not surviving, but I was wasn’t settled at all.
“He was coming at me and he was doing my head in and I wanted to clear my head a bit at the end of the first and get in for the second.”

Gallagher never made it to his corner to compose himself.
Instead he fought fire with fire and unleashed a combination of punches which stopped Dixon in his tracks after two minutes and 49 seconds of their welterweight clash.

However, Gallagher rejected the notion that his opponent was overcommitted in the opening round.
“He was boxing brilliant and he is a nice fella. I was chatting away to him and his coach after the fight, added Gallagher.

“The way he was moving, he was stepping back and he caught me with a few decent shots.
“He tucked up a bit and I came into him and he fell down a bit and I came in with that right hand and that’s what caught him. I don’t think he was too committed – he was boxing well.”

Despite Dixon’s advances, he was unable to continue after Gallagher’s thunderous right and ‘Pat Man’ insists referee Bob Williams made the correct decision to bring the fight to an end.
“I was watching it back and it was the right decision to stop the fight,” added the Belfast boxer.
“Before hand, the referee came in and gave us strict instructions.

“He said if any part of your body touches the ground other than the soles of your feet, I’ll give you your full count and, if your legs are gone by the time you are up, I’ll stop the fight.

“That’s exactly what happened. When he (Dixon) got up, he fell backwards.
“He fell heavily as well. His feet went from underneath him. The referee felt he had no choice.

“It is only a month ago since the Nick Blackwell fight so that will be fresh in their minds as well and they would be under strict instructions.”
Such was the swift nature of the stoppage, Gallagher reckons he could box again this weekend.

The more likely scenario though is that he will have to wait until later in the year before stepping into the ring again.
“I will have to sit down and get talking to John (Breen) and maybe get talking to the McGuigans (Cyclone Promotions) and see if there is anything for me,” said the former Commonwealth gold medalist.

“I feel like I have been robbed of a fight after all that training! For it to be stopped like that, I wouldn’t take it back but I could fight again this weekend.
“I could have fought half an hour after the fight if they could have found me an opponent, I was that fresh.

“There probably won’t be too much happening until after the summer.
“I have a holiday in two weeks’ time so I probably won’t fight again until September.”

Cummings, who has won nine of his 10 professional fights, saw off the challenge of Frankie Borg.
The Coalisland middleweight stopped veteran Welshman Borg with a crushing left hook in the sixth round.