GERRY ADAMS: Singing and climbing are on that 2021 list 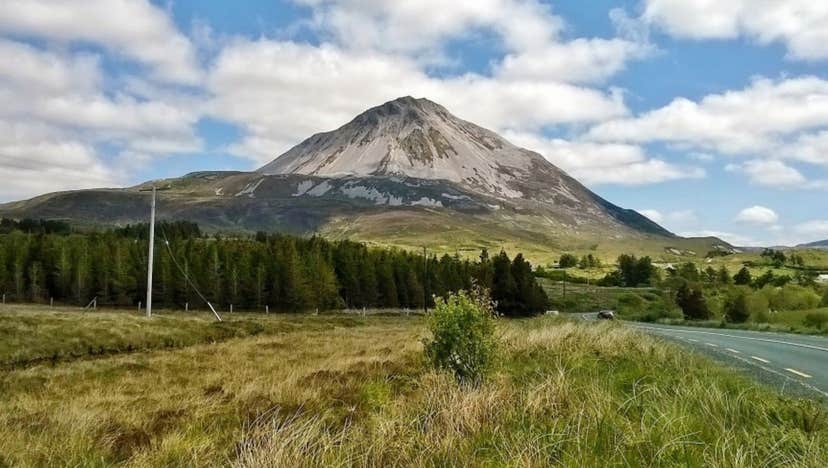 CLIMB EVERY MOUNTAIN: Gerry Adams is set to take on Errigal again in the New Year

DEAR readers, a very happy 2021 to you all. Here are ten personal things I want to do in this bright New Year.

• Survive the pandemic. Stay alive and stay healthy. That means following the health advice and getting the vaccine as soon as I can.

• Climb Errigal again. I used to do that regularly but the pandemic and travel restrictions intruded. Ewan McColl wrote ‘The Joy Of Living’, a very fine song, when he realised that he could not hill walk or climb as he used to because of his age. I never really knew what he meant until my last ascent up Errigal. But as I panted slowly heavenwards I discovered the secret. Take your time. It’s not a race. So I will keep going upwards for as long and as slowly as I can. And as soon as possible in 2021.

• Publish my new book of short stories. The Witness Tree has also fallen foul of the pandemic but hopefully mid-Summer will see O’Brien Press launching this collection.

• Keep producing the Léargas series, in partnership with the incredible RG McAuley. This not-for-profit project is about women and men I came to know, or know of, along life’s journey. Kathleen Largey, the singer and activist, is the subject of our next tribute. Hopefully to be published before Easter. Then we intend to do one about the Armagh Women in time for the hunger strike anniversary.

• Get to more games. The standard of hurling, camogie and football at underage, and all other levels, is rising in Belfast as a result of the work of many dedicated local GAA volunteers, parents and mentors and club stalwarts. Spectating is a great way to support Gaelic games. Commenting on the state of play and shouting loudly about the referee’s shortcomings from the safety of the ditch is a great way to entertain those around you. And to get rid of stress. And self-respect.

• Learn an entire song. It is a little known fact that I gave up a promising singing career in order to concentrate on  the cause of Irish freedom. I have recently realised that I know a few lines of hundreds of songs but if I was called on to sing I could not sing an entire song. I hope to rectify that by learning all the words of I Wish I Had Someone To Love Me and Mo Ghlle Mear.

• Get called to sing.

• Improve my knowledge and use of the Irish language.

• Have a few very pleasant ordinary social outings with family and/or friends.

• Intensify my involvement in the cause of Irish freedom so that I can enjoy being a citizen in a free Ireland as soon as possible.

It's a dog's life

WE have two dogs. Truth to tell, we have had two dogs for a very long time. Once we had three. Three times or four times when puppies arrived we had a dozen or so. But that was only for a wee while.

I wouldn’t be without a dog. Since I was about six or so, when my uncle went to Canada and left his dog with me, there has always been a mutt in my life.

Our two dogs are Fionn and Fiadh. They are labradors, a good breed, especially tolerant of  children. Fionn is a large male, beautifully gingerishly gold in colour and  very handsome. The problem is he won’t let another dog pass him without challenging it to a fair dig. He is also very strong and hard to contain when he engages in this belligerent behaviour. Apart from the stress and sheer annoyance involved I am very embarrassed by these outbursts. As a dog owner of the old school I believe that the human must always be in control of the canine. I tut tut to myself when other dogs ignore the commands of their humans. So when my dog does that to me I am scundered.

Fionn’s belligerent behaviour can be traced to a mauling  he endured when he was a pup. A particularly obnoxious terrier seized him one day in the Falls Park and left him bloodied and wounded and in need of medical attention. This truama is at the root of Fionn’s anti-social attitude to other dogs. This tendency increased when Fiadh arrived. Fiadh is from Tipperary. She is a a much more biddable hound. With a very fetching smile. She is also a bitch. She made Fionn a father. Twice. That added a jealous macho element to his behaviour around other dogs, especially if he is in Fiadh’s company. Controlling him on his own in these circumstances is challenging. Controlling the two of them is a Herculean task.  It takes the joy out of a good walk. Unless in a lonely wild place which is devoid of other mutts. And that’s not always easy to get to. Especially with big dogs. Transporting them can be problematic.

Why am I telling you all this? I suppose I have to tell someone. I am coming slowly to terms with the reality that big dogs and I have had our day. I think I have a way forward. I could leave the dog walking to more enabled, younger, anonymous family members. And I could get a smaller dog for myself. A wee Cairn terrier, a Glen of Imaal madadh, or a good old fashioned mongrel? A wee house dog. That would be the solution. If my good wife and Fionn would let him or her in. That seems unlikely at the moment but I think it is the only feasible solution. In the longer term. So I intend to work on that. Slowly.

In the meantime I won’t give up entirely on walking Fiadh or Fionn. Dogs love walks. Even more than they like their dinner. And I’m contrary. So if you spot me being dragged by two, or even one, large good looking canine along the highways and byways of West Belfast, be warned. Especially if  you are walking your dog. Take pity on me. As much as I hate to admit it, I’m not entirely in control. It’s hard to teach an old dog new tricks.  Stay clear. And don’t blame me. Big dogs make me  do it.

Join the unity conversation in 2021

WHILE Brexit and the Coronavirus dominated the political agenda for much of 2020, nonetheless the debate on the proposal in the Good Friday Agreement for a unity referendum and the value, form and nature of such a referendum have all gathered momentum.

Several initiatives on this by academics have recently taken place across the island; two weeks ago Fianna Fáil MEP Billy Kelleher held an interesting and informative online debate on this issue; and Sinn Fein, Ireland’s Future and others have also held similar online events.

The constitutional status of the north has long been the determining factor in northern politics. I believe the opportunity now exists for this generation to finally end this by achieving a united Ireland.

From an Irish republican perspective 2020 was a good year. It saw the restoration of the power-sharing institutions of the Good Friday Agreement, the continuing electoral erosion of political unionism, and the emergence of Sinn Féin as the largest party in the 26 counties. Sinn Fein is now the largest party on the island of Ireland.

A continuation of the hard work that achieved these gains means that the opportunities in 2021 for continued growth and for the advancement of Irish unity are enormous.

The positive arguments in favour of self-government and for Irish unity are common sense and winning more and more converts. So, if you believe in a new Ireland – a shared Ireland – based on fairness, equality and mutual respect join the conversation in 2021 for a united Ireland.