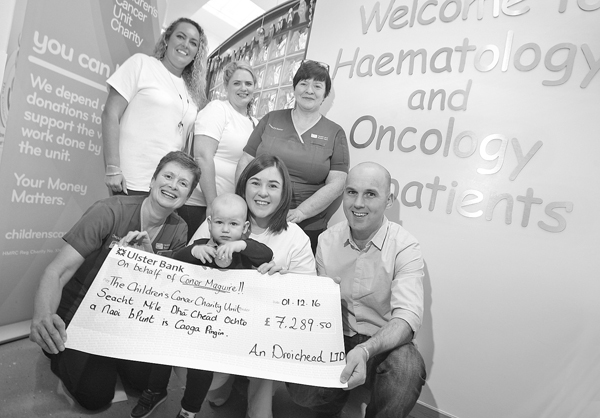 GENEROUS GESTURE: Seaneen O'Loan and Tara Gibney from An Droichead with Catherine, Ciaran and their son Conor presenting deputy ward sisters Patricia Fleck and Gail Burns of the Haematology and Oncology Unit in the Children's Hospital with a cheque for £7289.50

BIG-hearted staff and friends of An Droichead in South Belfast have joined together to raise £7,500 for the Children’s Haematology Unit in the Royal Victoria Hospital.

The generous donation comes after 18-month-old Conor Maguire from An Droichead’s daycare facility was diagnosed with leukemia.

The Maguire family, from the Market area, say they are eternally grateful to the staff of the Children’s Unit and the staff at An Droichead for the care and compassion shown to them and their son at this time.

Conor’s mum Catherine said: “Conor is currently three months into diagnosis, he will have to endure three and a half years of chemotherapy. At the minute it’s a six-month intensive block and then he goes into a three-year maintenance programme. Thankfully, he is responding well to treatment.

“The leukemia diagnosis came as a terrible shock to us as Conor had not been ill. He had attended An Droichead as usual that week and on the Saturday evening he started to cry and went into what we thought was a seizure, he passed out and we rang an ambulance.”

Catherine said that once Conor arrived at hospital the staff acted swiftly to help their son.

“Once he was in hospital they carried out blood tests on him and the results came straight back and we were told it was leukemia, it was a terrible shock to find out, then treatment started immediately. He was diagnosed at 11pm on the Saturday night and his treatment began on the Monday.

“I cannot speak highly enough of the staff here, Within a few hours of Conor being admitted we were brought round to the Haematology Unit. Immediately Conor had a blood transfusion and special medicines to protect his organs against the chemotherapy that he would be starting that week. On Monday he was in theatre being fitted with a central line to give him his chemo.

“Everything happened so fast, the medical care is exceptional and. as for the nursing staff, it’s not just a job to them, they make you feel like your child is the most important person in the world.

“They are so unbelievably kind, caring and compassionate. The big stand-out thing for my husband Ciaran and I was that we didn’t feel like we were just one family in a queue of families, we felt special, they are living this experience with us. To be able to give something back on behalf of Conor is wonderful and we are so grateful to the staff of An Droichead for arranging this and we want to thank everyone who donated.”

Tara Gibney from An Droichead Day Care Facility said: “We are delighted to be able to donate this cheque today in aid of Conor Maguire.

“Originally we wanted to raise the money for the Maguire family, however they wanted to donate it to the unit to acknowledge all the wonderful work that they do.

“We raised the money by doing Sober October, Movember, a walk and pram push and a coffee morning. Everyone has been extremely generous and we would like to take this opportunity to thank them,” Tara added.