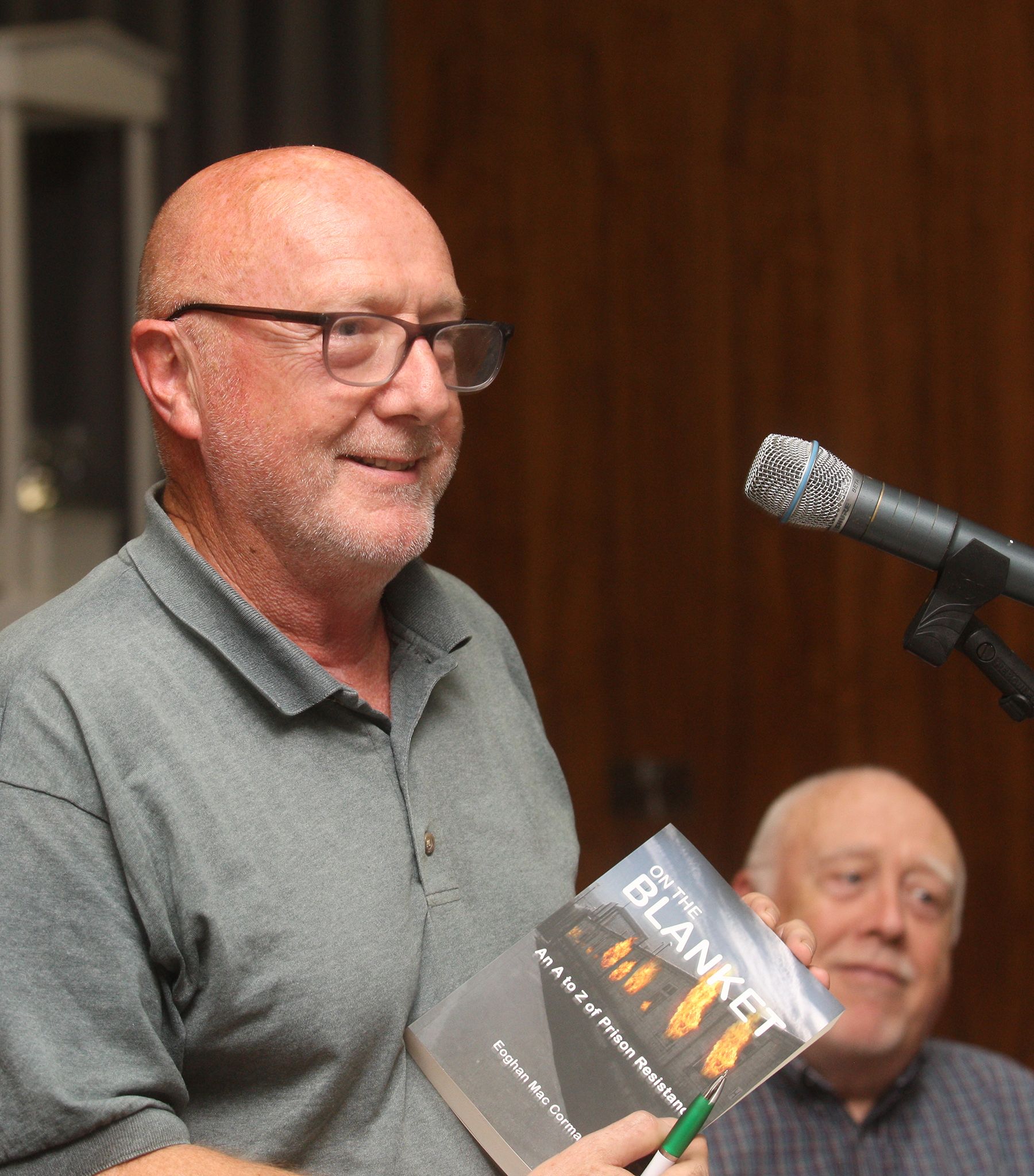 LAUNCH: Gino Mac Cormaic at the launch of his new book in the Felons

Sentenced in the following May, he spent five years on the blanket protest and a further 10 years in jail before release. But his new book ‘On the Blanket: An A to Z of Prison Resistance’ isn’t about Gino Mac Cormaic. His anthology uses an A to Z of key words to tell of both life and death in the H-Blocks, where ten men perished on hunger strike.

The Derry man’s account is amongst a succession of books released by former blanket men in the past year, including the ground-breaking works of Jaz McCann, Lawrence McKeown and Seamus Kearney. In adding to that history, Gino has published what is a book of anecdotes that give and illustrative description of the day-to-day of the blanket protest.

“I wanted it to be different from the other books that are out there,” Gino said.

“There was no point trying to write the same story as Jaz, Lorney (Lawrence) or Seamie. My book is kind of different, it’s a wee bit more quirky. It deals with all the dark periods, but it tries to do that with a bit of humour.”

Capturing the humour of so traumatic a time does not, Gino explains, suggest a “glib” or a “trite” look at the protest. His account has its fair share of “raw” and "very emotional” moments. However, it is an attempt to capture the essence of life in the H-Blocks and to transport the reader there.

“It’s to try to give people a sense of what it was like being in the wing, so in some way it captures the atmosphere of the wings,” he said.

“I wanted to show the families as well as everybody else that there was a life before death.

“The boys who died on the protest had comrades round them, had very dark days, but also had good times amongst their friends and comrades in a joint struggle against the British. “We all got great energy and strength from that friendship and from that comradeship.”

Much has been written about the blanket protest by outside observers, who have analysed the politics of the struggle or trying in their own way to capture its spirit. Gino, for his part and as a former blanket man, expressed a desire to “give the story back to people that were there".

“The risk is that other people have written about it and they don’t know what it was like in there,” he said.

“A lot of the people who were on that protest were very young, they were only 18 or 19 in some cases, and they took on the might of a British policy and they defeated it. It has to show how we did manage to overcome despite all the odds.

In all, there were over 400 prisoners engaged in the struggle against criminalisation between both the blanket and ‘no wash’ protests in the H-Blocks and Armagh Gaol.

“They all experienced it in different ways,” Gino said.

Gino praised former POW Síle Darragh’s book, ‘John Lennon’s Dead’, which tells of the protest in Armagh Gaol. He spoke to the need for more to tell their story.

“I think more women in Armagh should get their voices out there,” he said.

'On the Blanket: An A to Z of Prison Resistance' is available to buy at An Fhuiseog and An Ceathrú Póilí (An Chultúrlann), or online at pluid.ie