Gleeson keen to maintain standards with big prize on offer 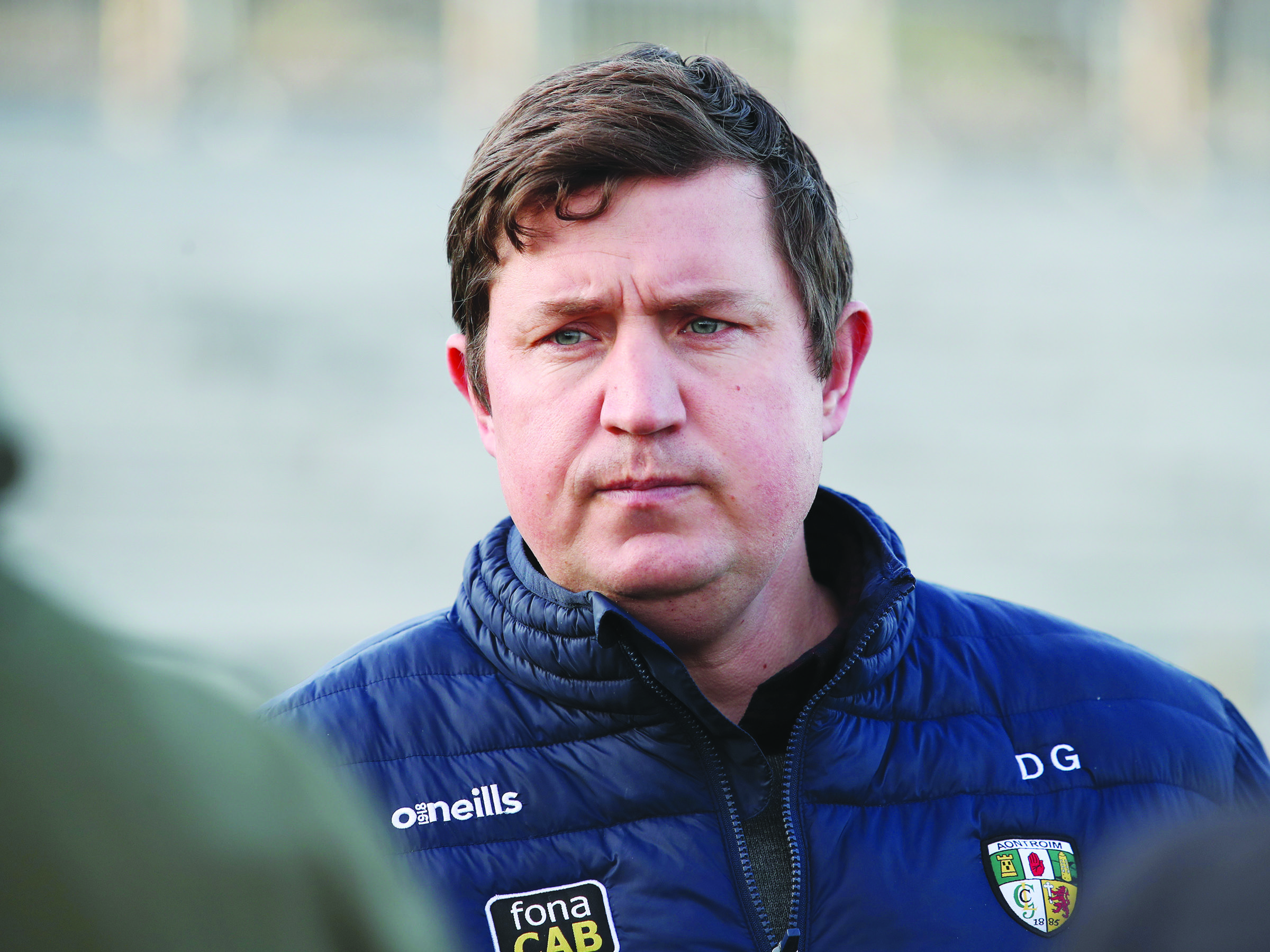 IT’S been an excellent start to life as a manager for Darren Gleeson with the Tipperary man guiding Antrim to League promotion and into Sunday’s Joe McDonagh Cup final.

The Portroe man lifted Liam MacCarthy with the Premier County in 2010 and 2016, whilst claiming an All-Star in 2014 so his knowledge of the game could never be called into question.

Converting ideas into results on the pitch is the tricky part but the 39-year-old has found the right blend to get the players to commit and then execute on the field.

In years gone by, Antrim had real issues in putting the best players out on the pitch for a variety of reasons, but not so this time.

The competition for places on the team and indeed, match day squad is as fierce as it has been with missing out on a jersey hugely unlucky as they would be more than capable of doing a job.

Players know that an off-day will see them replaced and a hard road back onto the field, so standards have not dipped this year and that has been the key factor throughout the campaign.

“It’s not just about getting numbers in - it’s about getting the right people into the room and if we did, we could start something,” said Gleeson.

“That was reflected in the League performances this year and in the Joe McDonagh. The rewarding thing was that all the players we have brought in have contributed and seen the field.

“When you look back at the statistics of the year, everybody has made a contribution and all 32 guys have seen pitch-time in League and Championship.”

Gleeson and his management team will have had some tough calls to make to select the 15 and nine subs for this weekend and throughout the year, he has been consistent in stating that performance in training is everything in terms of putting yourself in the frame for a start.

That will have been the major factor heading into this final and also having the right personnel there who will do the job that is needed to get over the line.

“There are times when some of those lads are on the bench for tactical reasons and Sunday might bring that as well,” he stressed.

“You might be surprised when a player isn’t on and their form has been good, but it’s for what we need to do on the day.”

At the outset, Antrim’s sole focus was winning promotion in the League and they achieved that with a win over Kerry in the 2A final back in mid-October.

Heading into the Joe McDonagh Cup, many would have tipped Carlow and Westmeath to contest the final as they played in Division One this year. That scenario didn’t transpire with Antrim making a huge statement with a demolition of Westmeath in their opener and salvaging a draw in Carlow that set them on their way.

When Kerry defeated Carlow in Tralee, that stamped the Kingdom’s ticket to Croke Park and Antrim would join them as they blitzed Meath in their final game, confirming they were the form teams of the competition.

“I think we have been playing with a small bit more abandon,” said Gleeson of his team’s red-hot form of late.

“The pressure has come off as we set a goal at the start of the year to win the National League and that brought a bit of pressure.

“The Joe McDonagh wasn’t on the table until five minutes after the game (League final) when we got back into the dressing room, so they have had a bit of a free cut at this.

“Carlow and Westmeath were the favourites coming into the Championship. Antrim, Meath and Kerry were seen as the middle ground and that’s where we were, so it gave us a free cut and probably helped with that pressure going off, giving our lads a free run to express themselves.”

The wide-open spaces of Croke Park should give them the opportunity to do just that with the eyes of the hurling world focussed on a competition that has not got the credit it deserves.

Antrim may have won the three meetings against Kerry so far this year, but Fintan O’Connor’s side have not been too far away in recent games and they will certainly be right in contention on Sunday.

In the last game, they would finish with 14 players after Fionan Mackessy was sent-off after an off-the-ball incident and in the closing stages, a bit of niggle did creep into the game with players perhaps overly familiar with one another at this stage.


“It (familiarity) breeds a bit of contempt but there’s a lot of mutual respect between the teams,” said Gleeson.

“I wouldn’t have known much about Kerry hurling until I got involved with Antrim, but I have seen what they’re about and they’re a really capable side. They represent a pocket of hurling in north Kerry and that means a lot to them.

“Kerry people are used to going to Croke Park on All-Ireland final days and those boys won’t be found wanting on the day for what it would mean to them.

“From our point of view on the tactical side, everyone will want to play the game on their own footing, but finals can take a life of their own sometimes and something no-one has planned can be a key point in the game that works out for you. We’ll take credit for it afterwards if it’s in our favour.”

The stands may be empty on Sunday, but that will do little to take away from the sense of occasion as the teams take to the field in the first game of the day that is the curtain raiser to the All-Ireland final between Limerick and Waterford.

Playing the game and not the occasion will be crucial for Antrim, but they have plenty of experience at GAA Headquarters and Gleeson insists his players are only concerned about what happens once the ball is thrown-in and nothing else.

“The field is the same dimensions as the one we faced into last week at Páirc Tailteann and the only thing that will matter at the end of the game is the scoreline,” he added.

“Occasions are for supporters and families, but to us it’s the scoreline so we just have to detach from the occasion and everything leading into it. It’s nice to have a fanfare around it for the county as I think Antrim needs it as a county, but for the group we just need to get the result.”

One welcome feature for the Saffrons this year has been the spread of scorers as no longer are the relying on one or two to do the bulk of that work.

Against Meath, there were 11 players who registered, with nine apiece in the Carlow and Westmeath games, while there were five against Kerry in terrible conditions at Corrigan Park last month.

That ability for a player to step up on any given day and put a stamp on the game is there so with threats right across the board, working out how to nullify a group of forwards who have been scoring freely becomes all the more difficult.

“Michael Bradley is someone who people would have looked at earlier in the year where he was doing a lot of work for us out the field, then against Meath he hit a pocket of space and banged eight points.

“Niall McKenna had been scoring freely all year and had to do more work on his side of the field so didn’t get the scoring opportunities.

“We have the ability to score from everywhere, which is greats but with the attacking nature we play we can concede a bit. But if we keep the radar in we will hopefully be alright on Sunday.”

Kerry have their own threats, none more so than Shane Conway who would grace most teams in the county although the Boyles - Mikey and Padraig - plus Daniel Collins are all well able to be match-winners for Kerry.

The onus will be on limiting the supply of ball in and that will likely fall to midfielders Eoghan Campbell and Keelan Molloy, plus the half-back line offering protection for the full-backs.

Nerves will undoubtedly play a part, but once things settle, Antrim have the ability to build a winning tally. Defeating the same team for a fourth time in one year is not an easy task, but what has gone before is simply irrelevant now.

It’s now just a case of delivering a performance and should they do that, then they can round off a magical 2020 with another piece of silverware and a seat back at the top table for 2021.