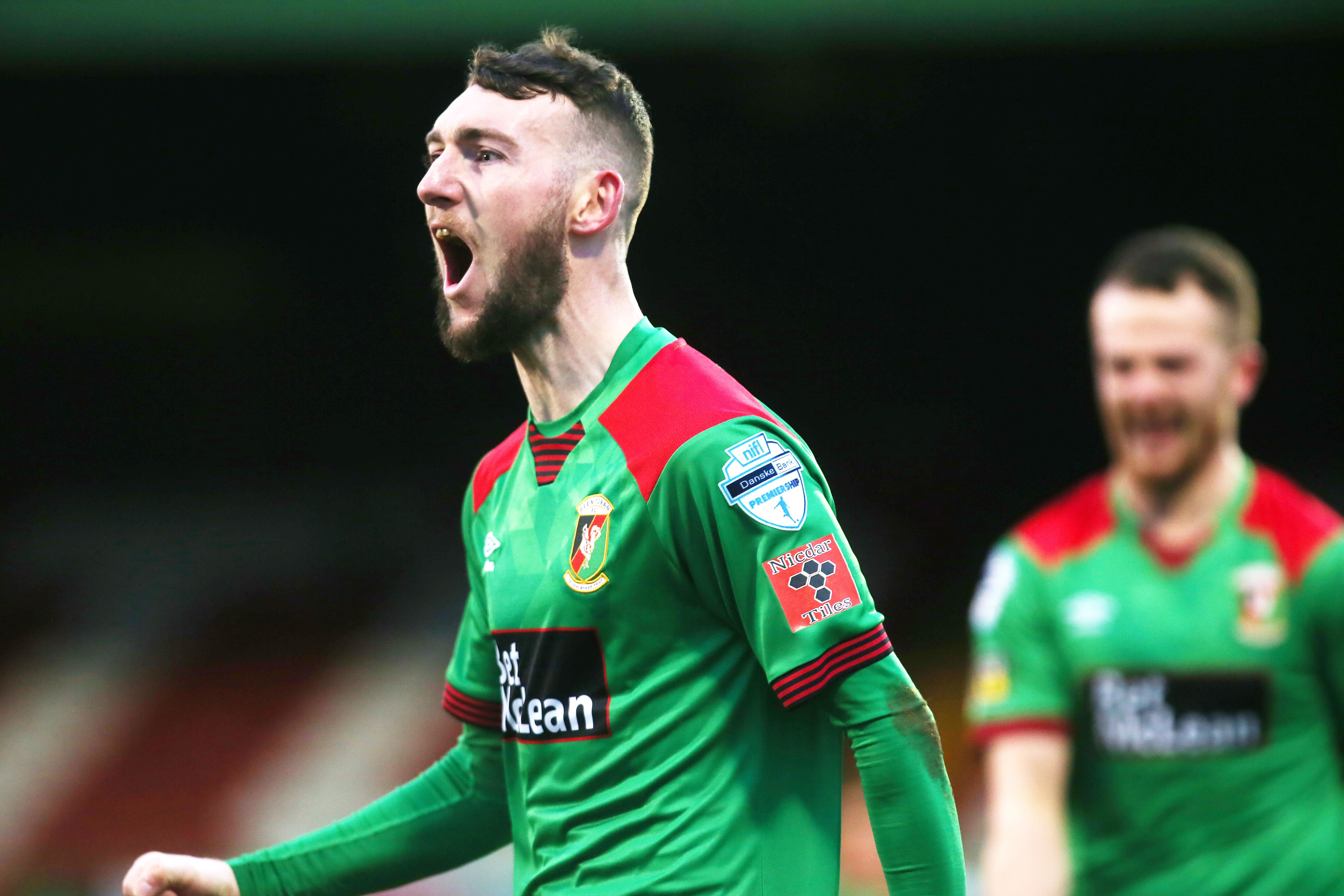 Cliftonville suffered their first defeat of 2021 as Jamie McDonagh struck late to secure a 1-0 win for Glentoran at The Oval on Saturday afternoon.

The swirling wind caused both sides problems and it looked as though the spoils would be shared until a sizzling effort from McDonagh secured all three points for the Glens.

The hosts should have doubled their lead deep in injury-time when Garry Breen caught Conor McMenamin in the area with Breen departing through a second yellow card, but Cricky Gallagher was denied by McCarey from 12 yards.

File this under 'goal worthy of winning any game' 🚀🚀🚀

Cliftonville manager Paddy McLaughlin named the same starting 11 that drew 2-2 at Coleraine on Tuesday evening as captain Chris Curran was deemed fit enough for a place on the bench and returned to the 18-man squad.

Glentoran started the brighter at the windswept Oval as Hrvoje Plum let fly with an effort from distance that deflected off the head of Breen and behind for a corner which came to nothing.

Just 60 seconds later, Robbie McDaid was slipped in one-on-one by Rhys Marshall but Aaron McCarey got down low and did just enough to put off the Glens ace marksman. Marcus Kane was next to let fly with a driven shot that Jamie Harney did well to block.

On 13 minutes, Cliftonville found their first opening through Rory Hale’s clipped ball into the area which was flicked on by Ryan Curran into the path of Barry Coffey who tangled with Patrick McClean and went to ground, but referee Ian McNabb waved away the subsequent penalty appeals.

Moments later, Aaron Donnelly slipped the ball into Hale who shot over the bar and followed that up minutes later with a low, wayward effort off target.

The best opportunity came midway through the first-half as Aaron McCarey’s miscued goal-kick fell to Rory Donnelly whose quick release found McDaid in the area, but McDaid snatched at his effort and shot high over the bar.

McDaid went close again in first-half injury time when Caolan Marron’s cross was flicked on by the head of McDaid and McCarey did well to turn the ball past the corner at the expense of a corner which came to nothing as Cliftonville weathered the first-half elements and went in level at the break.

Glentoran picked up where they left off after the break as Plum pulled the ball across the area and Jamie Harney was well placed to clear the imminent danger.

Aaron McCarey then confidently collected a Plum corner with McMenamin curling an effort wide of the target.

Cliftonville almost took the lead in bizarre fashion as Paddy McClean turned and hammered a clearance against Rory Hale and into the hands of a thankful Dayle Coleing.

At the other end, a deep cross from Marcus Kane was nodded into the path of Rhys Marshall but the defender shot was too high to trouble McCarey.

Another dangerous cross from Kane fell to Marshall whose shot was blocked; Conor McMenamin picked up the scraps but Aaron Donnelly hammered the ball out of harms way.

On 88 minutes, a Jamie McDonagh corner was spilt by McCarey and Marhsall’s follow-up was deflected behind off Ronan Doherty for another corner.

McDonagh sent in another dangerous delivery that McClean met but McCarey parried. Marcus Kane kept the danger alive and fed McDonagh whose 25-yard rasping effort found the top corner and beat McCarey as the Cliftonville players sunk to their knees.

In the aftermath, Garry Breen was booked for dissent towards referee Ian McNabb and as the visitors chased the equaliser in injury-time, the Glens had an opportunity to double their lead as Breen caught Conor McMenamin in the area and McNabb pointed to the spot before showing Breen a further yellow and subsequent red.

Christopher Gallagher had the chance to put a gloss on the Glens’ win but McCarey thwarted the effort and the hosts gladly settled for the 1-0 win.

“I thought we deserved it” reflected Glentoran manager Mick McDermott.

“If we left here with a draw or a loss it wouldn’t have been fair but sometimes football isn’t fair.

“I thought we played really well and in the first-half they only had one set-piece. In the second-half Cliftonville changed a few things. Paddy’s a good manager and a good coach and he changed a couple of things and we invited a bit of pressure.

“The tide turns in football. They’d a 15-minute spell where they did well; we had to make some changes and I thought we got back into the game and deserved to win.”