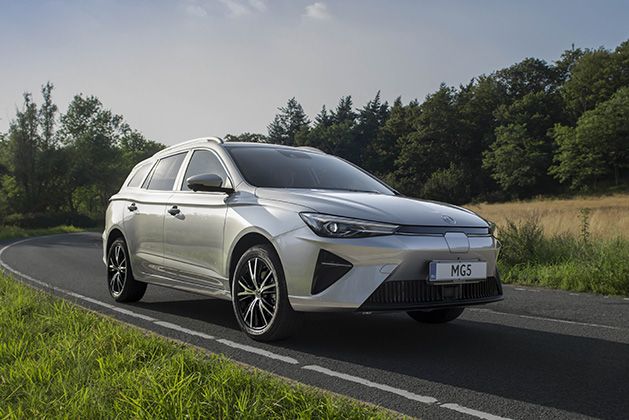 NEWCOMER: The new MG5 EV should prove popular with private and business users

A FEW weeks ago, MG announced that it would be attending the Goodwood Festival of Speed and at the event it would offer visitors the chance to be among the first to see the new MG5 EV all-electric estate car. That first official viewing happened on Goodwood’s Electric Avenue last Thursday, with the award-winning estate car taking centre stage at Goodwood’s dedicated Electric Vehicle (EV) section.

I have not until now been much of a fan of the new MG motor company, I have always thought that their car design lacked imagination. But the MG5 has changed that for me as this is one good-looking car. Revisions to the exterior of the car include new front and rear bumpers, LED head and rear lights, and new wheels. The MG5 EV also comes equipped with the capability to power other electric devices such as e-bikes, portable heaters, camping equipment etc. The new vehicle has also received interior design and technology upgrades, including a 10.25’’ widescreen infotainment system with upgraded software, complete with connected car functionality through the company’s dedicated smartphone app.

The MG5 remains the only pure electric estate car in its sector and should, I believe, prove extremely popular for both private and business customers. It has already secured wins at the prestigious WhatCar? Awards, in addition to victories at the Auto Trader and WhichEV? The awards were due entirely to its practical design, efficiency, and affordability. This version of the car will be a strongly competitive option for customers looking for a full battery electric estate vehicle, and it goes a long way to reinforce MG’s reputation for value for money.

The MG5 EV has quickly established a strong following as a practical, affordable, and efficient estate car and MG are seeking to build upon that success by offering customers this attractive new design complete with a generous range of technology upgrades. The MG ‘Get More’ philosophy is a key part of their approach, believing that customers should get more as standard, and MG are confident that the new MG5 EV strongly reflects this. Prices will start at just over £27,000.

Defender workhorse gets that extra spark

I HAVE been wondering for some time now how long it would take before a DIY electric vehicle (EV) conversion kit would wonder no more as a company called Electrogenic has announced the launch of a revolutionary ‘drop-in’ kit to convert working Land Rover Defenders to fully electric power.

The conversion kit, aimed at the agricultural sector and landowners, has been in development and extensively tested over the past 18 months on Worthy Farm, host to the Glastonbury Festival. The kit is designed to be installed by a suitably qualified mechanic and to be maintenance-free.

So, how does it all work? Simple. An electric motor is bolted on to the vehicle’s existing clutch bell housing which means that the vehicle keeps all its gears, including high and low options.  It produces 120 bhp and 235 Nm of torque, which is almost identical to that of the original diesel engine.  52kWh of batteries are mounted under the bonnet, giving 100-plus miles of range on-road and considerably more when driving off-road or around a farm. As standard, the kit is equipped for 7.5kW AC overnight charging via a Type 2 connector. Faster charging can be specified as an optional extra.

This conversion retains the original Defender’s versatility and four-wheel-drive, while off-road ability is improved. With readily accessible torque and linear power delivery, it is effortless to drive, even in demanding off-road scenarios. Towing capability is also enhanced by the electric motor’s instant and abundant torque, while dual-stage regenerative braking enables ultra-controlled, brake-free off-road descents.

Electrogenic do high-specification conversions for other vehicles, but this Defender kit is all about giving off-road users an economic, sustainable option which is easy to install.  It gives the Defender, long a trusty workhorse for farms up and down the country, an affordable new lease of life, reducing running costs while enhancing performance and driveability around any farm. Having tested the electrified Defender alongside its diesel-powered counterparts, it is estimated that the electric version will save at least £6,000 in fuel costs over the course of an average year of on-farm use. Considering the conversion’s target price of £24,000 + VAT, the kit can pay for itself in four years.

In addition to the fuel cost savings, the EV conversion can also bring significant benefits in terms of wider running-costs.

The electric powertrain is designed to be entirely maintenance-free, and operate happily for decades, with the batteries good for 200,000 miles or more of quiet and efficient operations. They are always there ready for use, just unplug and drive away. An electrified Defender also represents one more step towards a farm achieving its sustainability goals. Surely they’ll be serving farmers ably in electric mode for many years to come.

Rovanpera underlines his huge potential with hard-fought win in Kenya

Rovanpera once again proved the class act in the field as he completed 19 brutal gravel stages to take his fourth win from six events this year. Second was Welshman Evans with teammates Takamoto Katsuta third and eight-time world champion Sebastien Ogier fourth to score Toyota’s first 1-2-3-4 in WRC since the 1993 Safari Rally, won by Juha Kankkunen.

Rovanpera’s only hiccup happened on Thursday’s opening Super Special stage in Nairobi when he almost rolled his GR Yaris, picking up a puncture in the process. On Friday he fared admirably as Kenya’s deep sand wreaked havoc with WRC crews, ending the day 4.6s ahead of Elfyn Evans. Takamoto Katsuta, co-driven by Irishman Aaron Johnston, produced a solid drive throughout but had a far from a trouble-free run. Sebastian Ogier had to settle for fourth after he won Thursday’s opener, holding the lead until Stage 3 when his GR Yaris suffered a power loss from dust in the airbox.

Thierry Neuville headed a nightmare event for Hyundai, finishing in fifth position after suffering a series of mechanical issues. Meanwhile, Irish pair Craig Breen and Paul Nagle led a desperately difficult event for Ford M-Sport. Breen managed to recover from a broken steering arm to claim sixth ahead of M-Sport teammate Jourdan Serderidis. Nine-time world champion Sebastien Loeb, starting the event for the first time in 20 years, ended up eighth after his victory hopes were ended by an engine fire on Friday.

Ninth was Skoda’s Kajetan Kajetanowicz, ahead of Hyundai’s Oliver Solberg, who managed to nurse a wounded Hyundai home.

In the Championship, Rovanpera now heads the table by 55 points from Thierry Neuville, who is three points ahead of Ott Tanak. Tanak is ten points ahead of Irish pair Breen and Nagle, who are five points ahead of Katsuta and Johnston. The next round is Estonia from July 14 to 18.

In the British Touring Car Championship, after qualifying on pole Portadown’s Colin Turkington finished second in race one, third in race two, and sixth in race three (the reverse grid race) to close in at the top of the table on leader Tom Ingram and second placed Josh Cook. Turkington is now just twelve points behind Ingram and nine behind Cook. Reigning champion Ash Sutton is twelve points further back in fourth with Jake Hill fifth a further seventeen points behind. The next round of the Championship is the undulating Scottish circuit, Knockhill, on July 30 and 31.